MLK: Hey Proglodytes, It Was The Content of His Character, Not the Color of His Skin
Michelle Obama's Mirror ^ | 1-19-2015 | MOTUS

Ah, nothing says “civil rights” like a pre-Martin Luther Day re-enactment march in Selma, Alabama led by the cast and crew of the Oprah’s movie Selma.

Oprah Winfrey, fellow actors from the movie "Selma" and hundreds of others marched to recall one of the bloodiest chapters of the civil rights movement on Sunday, the eve of the national holiday honoring Martin Luther King Jr. 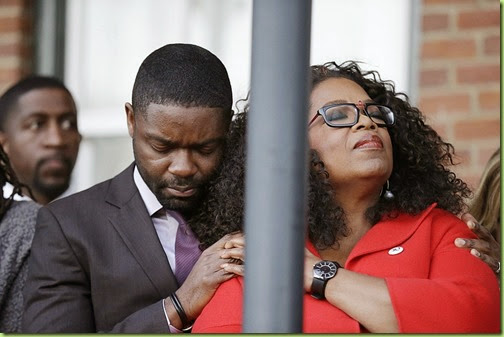 David Oyelowo, who portrays Martin Luther King Jr. in the movie "Selma," and the Oprah, who produced the film, at yesterday’s Selma memorial march, reacting to being shut out of the Oscar nominations by #AllWhiteHollywood.

It’s hard to imagine what MLK might have thought of yesterday’s march being used to hype the Oprah’s movie and the outrage over racist cops shooting innocent black men all across America:

"We need to be outraged when local law enforcement and the justice system repeatedly allow young, unarmed black men to encounter police and then wind up dead with no consequences," said Clay, a St. Louis Democrat. "Not just in Ferguson, but over and over again across this country."

The irony of the march being headed up by U.S. Rep. William Lacy Clay (Black), 8 other members of the Congressional Black Caucus and Oprah – the richest woman, black or not-black, in America - may have been lost on the organizers. Butt I wonder what MLK might have thought about it:

Meanwhile, Spike Lee, (black Hollywood gazillionaire) who is still smarting from being snubbed by the Oscars 25 years ago for his classic Do the Right Thing, has some advice for “Selma” director Ava DuVernay, based on his understanding of the ongoing racism in America:

MLK would have been so very proud. 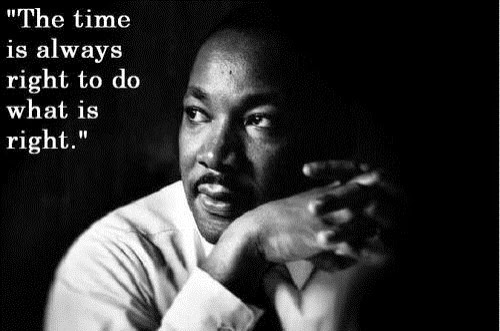 I sure wish people would start paying more attention to the content of Martin Luther King’s character and less to the color of his skin.

I refuse to accept the view that mankind is so tragically bound to the starless midnight of racism and war that the bright daybreak of peace and brotherhood can never become a reality... MLK

THIS JUST IN: BO PHOTOBOMBS THE OPRAH’S PUBLICITY SHOT: 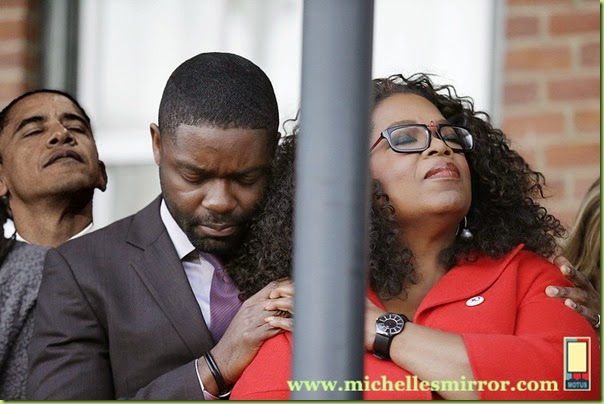 my MY my!! what a very long way we HAVE come...DOWNHILL Can you imagine the outrage, if they filmed an MLK movie and cast a WHITE person as MLK???

They expect to be GIVEN Oscars simply because of their skin color. By definition, that is everything MLK was against.

Doggone it..... and just when I thought that my reason for never viewing the Oscars because it was all just a popularity, PC and forum for leftist ideology, they up and refuse to bend for demands to consider affirmative action methods for their selection process. What has gotten into these people? Didn’t they see this coming? Are pigs flying in flocks over tinseltown?