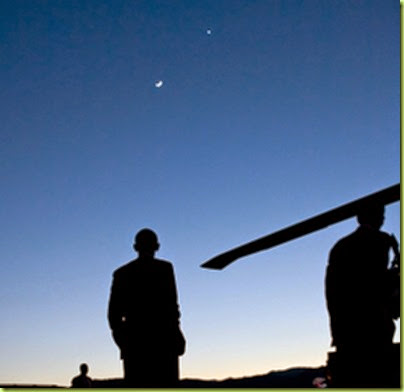 Obama: gazing at the moon and stars, gazing back at him

Some people think it unimportant:

The Washington Post may have been first in declaring the coming midterms “kind of—and apologies to Seinfeld here—an election about nothing.”

Stephen Hayes tracked the ‘Seinfeld Election’ as it made it’s way through the rest of the supportive Press:

Soon enough this description was popping up everywhere—the New Republic, the Los Angeles Times, the Christian Science Monitor, Bloomberg, Politico, and many others. The 2014 Midterms, the Seinfeld Election.

Alas, if only it were true! Unfortunately, per Mr. Hayes, the opposite is the case: it’s an election about everything:

Not only is this election not about nothing, it is being fought over exactly the kinds of things that ought to determine our elections.

It’s about a government that makes promises to those who have defended the country and then fails those veterans, again and again and again. It’s about a president who offers soothing reassurances on his sweeping health care reforms and shrugs his shoulders when consumers learn those assurances were fraudulent. It’s about government websites that cost billions but don’t function and about “smart power” that isn’t very smart. It’s about an administration that cares more about ending wars than winning them, and that claims to have decimated an enemy one day only to find that that enemy is still prosecuting its war against us the next. It’s about shifting red lines and failed resets. It’s about a president who ignores restrictions on his power when they don’t suit him and who unilaterally rewrites laws that inconvenience him. It’s about a powerful federal agency that targets citizens because of their political beliefs and a White House that claims ignorance of what its agents are up to because government is too “vast.” In sum, this is an election about a president who promised to restore faith in government and by every measure has done the opposite.

And let me be clear, even Barack agrees that his policies are on the ballot today – and that’s not nothing. 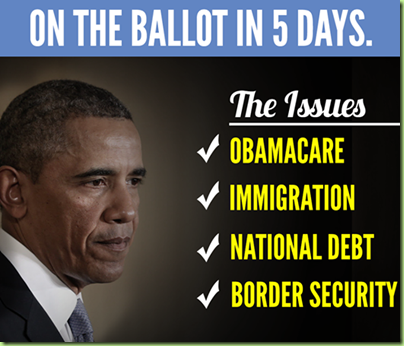 Yesterday we saw Mr. Goodwin’s suggestion that people vote exclusively for Republicans; Lady M made a similar effort to offset that bad advice by telling “her folks” to vote a straight D ticket: 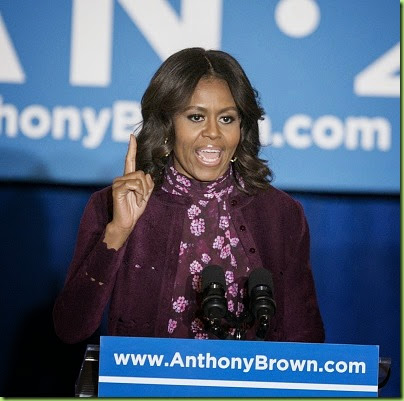 "That's my message to voters. This isn't about Barack, it's not about the person on the ballot, it's about you," Obama told "NewsOne Now" host Roland Martin on TV One. "And for most of the people that we're talking to, a Democratic ticket is the clear ticket that we should be voting on, regardless of who said what or did this. That shouldn't even come into the equation."

So you have your marching orders: let’s get out there and weigh in on the “election about everything.” It would make a great birthday present for former FLOTUS Laura Bush, who is 68 today.

And finally, in other news, a giant shooting star was sighted over Chicago and much of the Eastern United States last night. 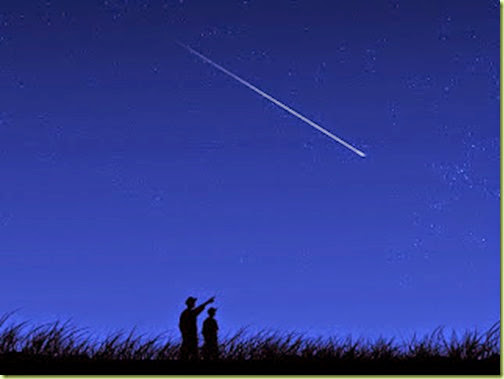 Coincidence? I think not. 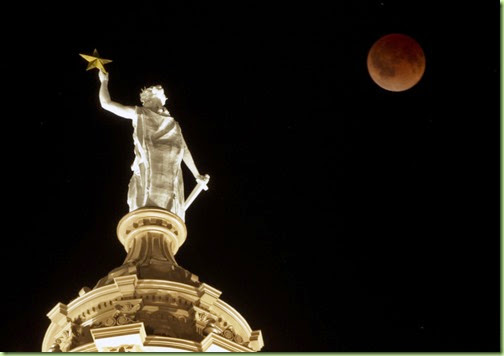 The blood moon glows over the Goddess of Liberty statue atop the Capitol in Austin, Texas, during a total lunar eclipse

Sometimes you gaze at the moon, sometimes the moon gazes at you. Let Liberty prevail.

“obama gazes at the moon. the moon blushes bashfully.”

There is gazing and then there is the uncomfortable stare of a stalker.

Obama leers at the moon...

Must be a Crescent Moon.

Obama gazes at the moon, what is that bright light in the sky, maybe I will ask reggie