I’m sure you all heard about the “Dirty, Dark Secret” that leaked out last week without official sanction: 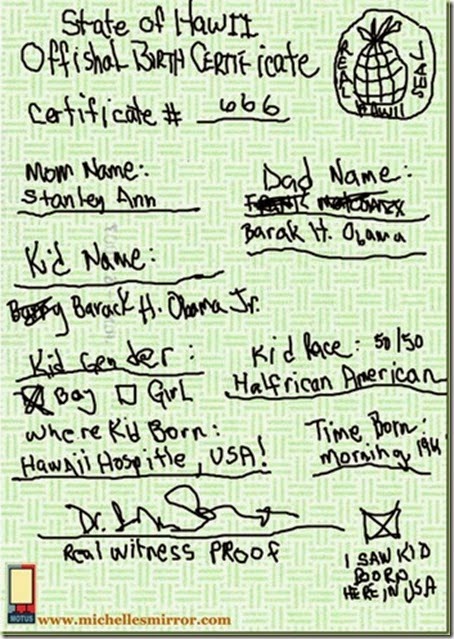 “Not because of you white people, but because of other black people” ??? Can he say that?

…One of the reasons we’re never going to be successful as a whole, because of other black people. And for some reason we are brainwashed to think, if you’re not a thug or an idiot, you’re not black enough. If you go to school, make good grades, speak intelligent, and don’t break the law, you’re not a good black person. And it’s a dirty, dark secret…

They tell them, ‘You’re acting white.’ So it’s a dirty, dark secret in the black community.

I’m not going to say that’s a dog whistle, because Charles Barkley is certified black enough to criticize other black people (h/t: Bo Snerdly), butt if I said that…well, you know the drill:

It’s crabs in a barrel…—we’re the only race that tell people if you don’t have street cred, with like, that means you been arrested— Like, like that’s a compliment. We’re the only ethnic group who say, ‘Hey, if you go to jail, it gives you street cred.’ It’s just typical BS that goes on when you’re black, man. But don’t waste a lot of time on it please…

Anyone care to guess how many black kids will be earning their street creds later this week when the St. Louis Grand Jury comes in with a decision in the Michael Brown shooting? While you’re at it, guess how many nationally prominent outside agitators civil rights leaders community organizers will be on hand to help them earn those creds. 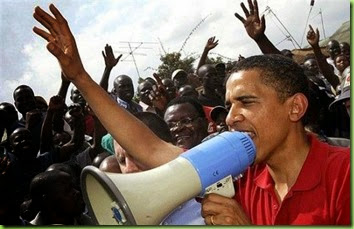 Remember when the presumption of innocence applied to the presumed perpetrator, as well as the victim? 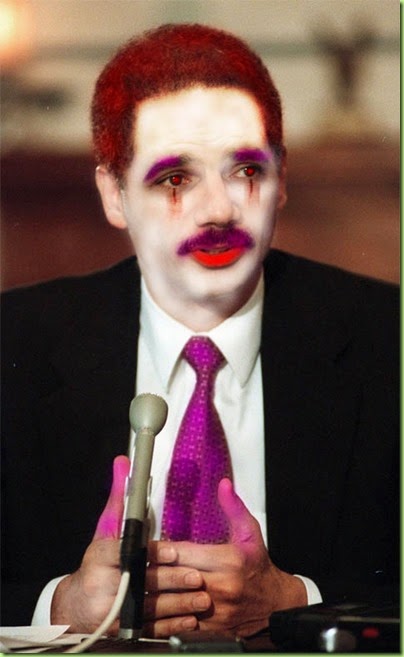 Yeah, well, that was BO – Before Obama; before the bus was filled with Bozos.

Hey, I’ve got an idea! Let’s see what Jesse “Never let a victim go to waste” Jackson thinks we should do about Ebola! 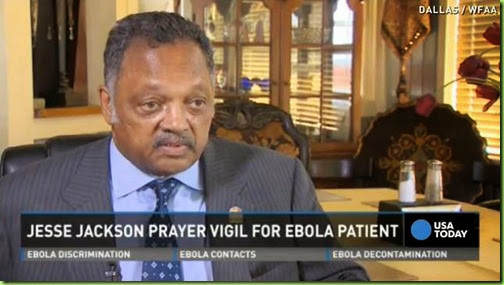 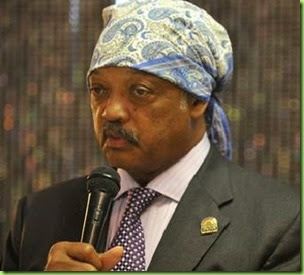 “We’re never going to be successful, not because of you white people, but because of other black people.” (Charles Barkley)

None of that is new. I remember the treatment smart and conscientious black kids got from other black kids in grade school... and that was a LOOOONG time ago.

Also, I worked with a super efficient black woman in an insurance office who told me: “I have to work twice as hard here as everyone else because that other black woman over there comes in late, does a bad job and is lazy ...so I have to make up for the awful image SHE projects.’ And it’s true, this woman worked her a%$ off.

Good for Sir Charles! Most people in his position have been intimidated enough to silence them.

Having spent a bit of time in the ghetto trying to help a few bright, ambitious crabs climb out of the pot, I can attest to the accuracy of Barkley’s statements.

Too many blacks have been brainwashed from the cradle to think that it is all whitey’s fault when they face more pressure to be a failure than successful. And eaders like Sharpton and Jackson whose primary job is to keep racial hatred stirred up aren’t helping.

Lyndon Johnson (or at least his strategist) was brilliant.
The War on Poverty built a totally govt dependent segment of society that is a bulwark of Democrat votes and off limits to any criticism in “polite” society.

it’s only a secret from the PC Crowd.

I believe this statement came about because of the Russell Wilson story. Quarterback for the Seahawks. Apparent locker room controversy because some of his teammates didn’t think he was “black enough”.

I was in b-school in the early 1990s. I still remember a black girl (I was over thirty, she was wasn’t...) in an Organizational Behavior class saying she’s in HR because AA is important to the corporation. (a 20th Century consumer and technology company now just a shadow of its former self.)

Think how hard conscientious blacks have to work now to regain what was lost under Obola.

He is EVERY negative black stereotype; lazy, wasteful, dumb and ignorant, anti-American, racist, too involved with sports, arrogant, out of touch with the mainstream, drug addicted, etc.

He’s the one who is enabling that crowd in Ferguson. Now, it’s perceived that license and liberty are the same and it’s OK to run around like drunken criminals because you disapprove with the actions of the authorities.

When you disagree with authorities... you VOTE THEM OUT. THAT is your LEGITMATE recourse... and it’s the same for everyone in America.

It doesn’t matter who you are, you work within the system. Of course it DOES help to have a mature and informed understanding of WHAT the system is and how it works... what is legal and what IS NOT!

Guess Charles has grown up a bit since he ran his mouth back in his 70s’ Olympic days. Couldn’t stand him then and can’t now but have to give him kudos for this.

An Open Letter to the Democratic Party (From Black
Woman)

“We, African American citizens of the United States, declare and assert:

Whereas in the early 1600’s 20 African men and women were landed in Virginia from a Dutch ship as slaves and from that tiny seed grew the poisoned fruit of plantation slavery which shaped the course of American development,

Whereas reconciliation and healing always begin with an apology and an effort to repay those who have been wronged,

Whereas the Democratic Party has never apologized for their horrific atrocities and racist practices committed against African Americans during the past two hundred years, nor for the residual impact that those atrocities and practices and current soft bigotry of low expectations are having on us today,

Whereas the Democratic Party fought to expand slavery and, after the Civil War, established Jim Crow Laws, Black Codes and other repressive legislation that were designed to disenfranchise African Americans,

Whereas the Ku Klux Klan was the terrorist arm of the Democratic Party, and their primary goal was to intimidate and terrorize African American voters, Republicans who moved South to protect African Americans and any other whites who supported them,

Whereas, according to leading historians (both black and white), the horrific atrocities committed against African Americans during slavery and Reconstruction were financed, sponsored, and promoted by the Democratic Party and their Ku Klux Klan supporters,


Whereas Brown vs. the Board of Education of Topeka (a 1954 decision by Chief Justice Earl Warren who was appointed by Republican President Dwight Eisenhower) was a landmark civil rights case that was designed to overturn the racist practices that were established by the Democratic Party,

Whereas after Democratic President Franklin D. Roosevelt received the vote of African Americans, he banned African American newspapers from the military shortly after taking office because he was convinced the newspapers were communists,

Whereas Democratic President John F. Kennedy authorized the FBI (supervised by his brother, Attorney General Robert Kennedy) to investigate Dr. Martin Luther King, Jr. on suspicion of being a communist,

Whereas Democratic Senator Robert Byrd of West Virginia, a former member of the Ku Klux Klan, made a 14-hour filibuster speech in the Senate in June 1964 in an unsuccessful effort to block passage of the 1964 Civil Rights Act and was heralded in April 2004 by Democratic Senator Christopher Dodd as a senator who would have been a great leader during the Civil War,

Whereas when the 1964 Civil Rights Act came up for vote, Senator Al Gore, Sr. and the rest of the Southern Democrats voted against the bill,

Whereas Democratic President Bill Clinton sent troops to Europe to protect the citizens of Bosnia and Kosovo while allowing an estimated 800,000 black Rwandans to be massacred in Africa, vetoed the welfare reform law twice before signing it, and refused to comply with a court order to have shipping companies develop an Affirmative Action Plan,

Whereas Democratic presidential candidate Al Gore created harmful racial division when he falsely claimed that the 2000 presidential election was “stolen” from him and that African Americans in Florida were disenfranchised, even though a second recount of Florida votes by the “Miami Herald” and a consortium of major news organizations confirmed that he lost the election, and a ruling by the U.S. Civil Rights Commission declared that African Americans were not denied the right to vote,

Whereas the Democratic Party’s soft bigotry of low expectations and social promotions have consigned African Americans to economic bondage and created a culture of dependency on government social programs,

Now, therefore, for the above and other documented atrocities and accumulated wrongs inflicted upon African Americans, we demand a formal written apology and other appropriate remuneration from the leadership of the Democratic party.