Transforming to a Transvestite: A Eurovision Winner Only a Mother Could Love
Michelle Obama's Mirror ^ | 5-11-2014 | MOTUS

I confess, when I woke up and saw this headline on Drudge I was concerned: Bearded Drag Queen Wins!

What a relief to discover it wasn’t another Lady M first. It was actually Conchita Wurst, aka “Tom” from Austria who won the Eurovision Song Contest.

Despite singing with a British accent, his/her native language is Austrian (h/t BHO). 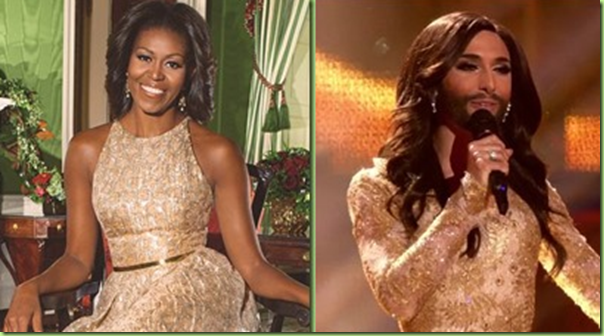 Nor does Conchita have much else in common with MO: aside from the smallish boobage, and being a bit thick in the middle, 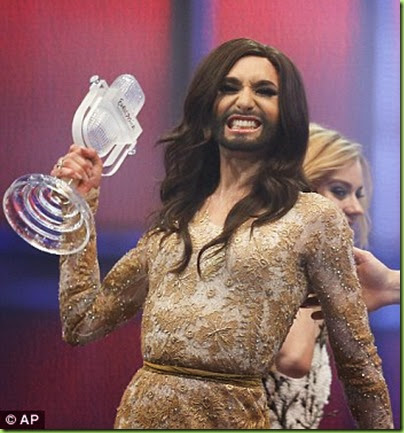 he/she isn’t built anything like Lady M. No luscious boo-tay and, as I notice he’s wearing full sleeves, I assume he doesn’t have fantabulous toned arms either. Plus I note he has perfect posture.

So nice try drag queen Lady M wannabe - and although you sure can sing like a girl, there’s really no comparison. Mo is a very powerful world figure, delivering important messages like #BanBossie and #BringOurGirlsHome and posing for selfies at college commencements. 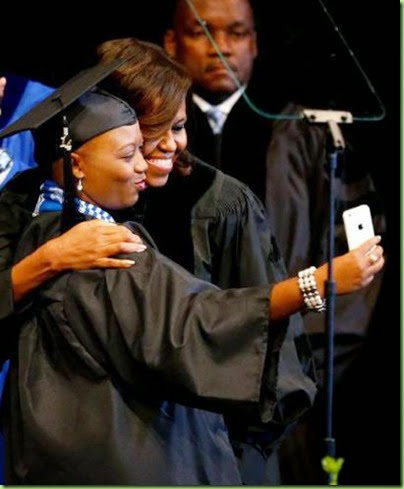 Besides, I have it on good authority that who Conchita really wants to emulate is Kimmy Kardashian: 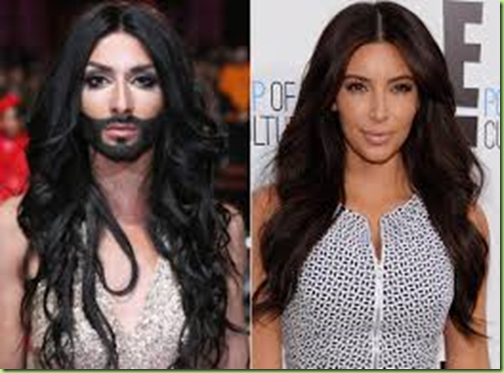 He/she’s going to need to make some major investment in pillows in that case. Those boobs and derrière aren’t going to pump themselves up.

Still, I think we need to acknowledge Conchita’s debt to MO’s fashion sense, as he/she seems to copy her impeccable style at every turn: 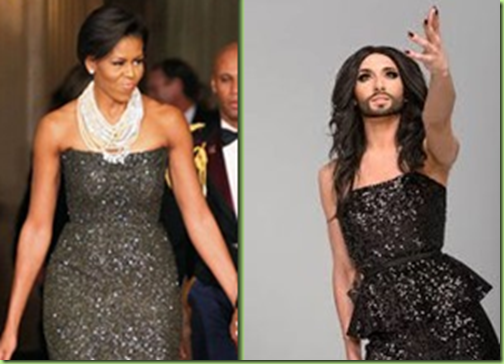 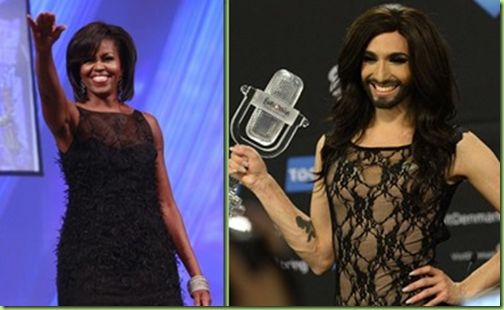 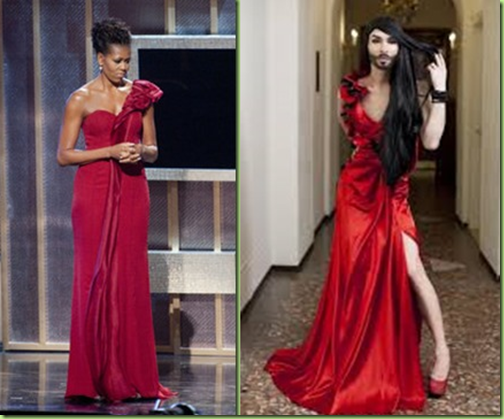 Lady M had no comment on Conchita’s historic win, and spent Mother’s Day weekend empathizing around the country and across the world. First she empathized with the Nigerian families whose daughters have been kidnapped by taping Big Guy’s Weekly Address for him,

“This unconscionable act was committed by a terrorist group determined to keep these girls from getting an education – grown men attempting to snuff out the aspirations of young girls.”

which is funny, because I thought that the Boko Haram were incensed by an internet video about Muhammad.

"In these girls, Barack and I see our own daughters. We see their hopes, their dreams - and we can only imagine the anguish their parents are feeling right now."

During Boo-Rock’s early campaigns, when MO wasn’t comfortable speaking to the little people yet, someone tried to coach her in the political skill of appearing sincere. They told her she could relate to people better by learning to empathize; to relate to their feelings rather than focusing on her own. She interpreted that to mean “make it about you” and that’s how we’ve been empathizing ever since. Well, that and the “I feel your pain” face, also known as “Bitchy Resting Face” syndrome. 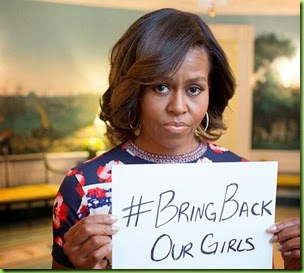 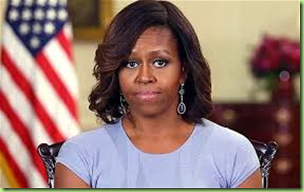 Butt I don’t want to distract from the historic news story of the day: A triumph for tolerance! The world has it’s first ever transvestite star!

Following the win, Ms. Wurst said "this night is dedicated to everyone who believes in a future of peace and freedom...we are unity and we are unstoppable."

… it just showed me that there are people out there who want to go into the future and go on, you know, not stepping back or thinking in the past.

Yeah, well, tell that to Boko Haram. They and their ilk still think it’s okay to kill people like you, Conchita. As do all the other Islamic fascists that want Sharia law to replace Western jurisprudence. In order to allow them to kill homosexuals, mutilate and sell little girls into slavery and kill them if they “bring shame on the family” in any way. Butt yay! Let’s hear it for those open-minded Euros: Now they have their very own drag queen! With a beard!! 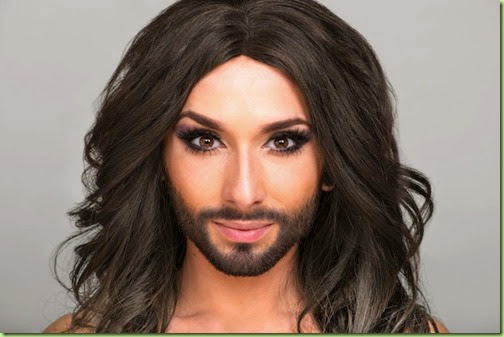 And as everybody knows, every man needs a good beard. 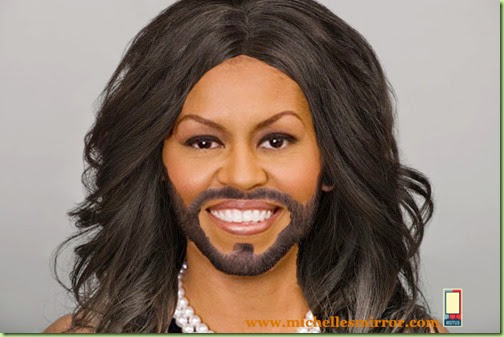 Happy Mothers Day out there - to all you mothers and everybody who has or ever had a mother!

In before the shave.

I am sure there will be a phone call from the White House to congratulate the Drag Queen.

Wow, I’ve seen ugly legs on a man before but those shanks are UGLY!

4 posted on 05/11/2014 7:33:40 AM PDT by miss marmelstein (Richard Lives Yet!)
[ Post Reply | Private Reply | To 1 | View Replies]
To: NOBO2012
I watched Eurovision last night. It was the most boring I've seen in years. If Eurovision had only been broadcast on the radio, I think you would have been shocked at the outcome.

The results were purely political.

Cultural Marxist brainwashing has been a complete success.

“A Eurovision winner only a mother could love.”
Better hide Mom’s glasses,Thomas is coming to visit her.

He reminds me of that satanic goat statue in Oklahoma.

This is just too funny. Political correctness and stupidity squared.

#1: None of the PC commentators seem to be able to remember as far back as last century (1998 to be exact - I had to look up the year) which was the last time a trans gender person won this silly competition. But she was Israeli so probably does not count.

#2: Conchita Wurst (sausage) from Austria; it certainly puts Sacha Baron Cohen’s Bruno in a special light. It is difficult to be a satirist these days.

#3: Apparently the Austrian singer and the Austrian broadcasting committee remembered a movie from the early eighties but none of the juries did. Which one? Tootsie of course.... or how to win fame and fortune in a PC world.

I don’t understand the whole article referring to the dude as a ‘she’. They clearly state that it’s a dude in woman’s clothing. Drag queen. There’s no fake female, pretend to be a chick, etc. They admit he’s a dude. So why continually use the female pronouns?

This obviously was meant as a big FU to Putin.

To Putin AND to every heterosexual Caucasian male. Most normal males don’t watch this event, but it is still a mental health hazard when this is the first and almost only news event in every “newspaper” on and off the net for at least a whole day.

Indeed, that’s probably why he favors long elegant gowns. And, it turns out his arms are long and toned.

Laser treatment for face/neck is expensive and PAINFUL.

Looks like he needs a LOT! Would be a huge improvement though.

So much for western civilization. I guess the only way to get ahead now is to be homosexual or some other deviant cross dressing pervert.

The anti-Putin theme was mentioned in news coverage - it was said that the Russian contestants were booed by the crowd - but that otherwise Eurovision was “non-political.”