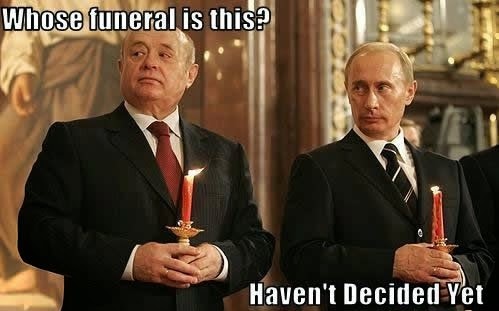 Today's combat in and near Slovyansk between Russian-backed insurgents and Ukranian military personnel resulted in 30 insurgent/terrorist dead, according to a Ukranian government statement...
But the interesting thing is that Chechen soldiers were amongst the 'rebels' killed in the battle for a key checkpoint north of the city- what the hell are they doing there?

Furthermore, local Ukrainians taped 'rebels' who just appeared manning another ('pro-Russian) checkpoint who were speaking a strange foreign language that was clearly not Slavic...

Earlier reports also had some Transdniestrans -from a breakaway strip of Moldova that wants to be annexed by Russia- showing up amongst pro-Russian insurgents that the Kremlin still purports to be 'locals rising up to protect themselves'- please.
I will give this to Putin... he's throwing all he can into the battle for Ukraine, calling favors, bribing Ukrainian police, hiring common street thugs, online threats- everything but uniformed Russian military personnel, anyway.
TOPICS: Conspiracy; Military/Veterans; Politics
KEYWORDS: chechens; moldova; russia; transdniestra; ukraine
1 posted on 05/06/2014 7:30:31 AM PDT by Reaganite Republican
[ Post Reply | Private Reply | View Replies]
To: AdvisorB; ken5050; sten; paythefiddler; gattaca; bayliving; SeminoleCounty; chesley; Vendome; ...

So the Russkies are using seamstresses now? Needlepoint or crochet?

3 posted on 05/06/2014 7:33:58 AM PDT by circlecity
[ Post Reply | Private Reply | To 1 | View Replies]
To: Reaganite Republican
pretty cool asymmetrical warfare Gee, ya figure the head of the KGB versus a community organizer that was a guest lecturer on an affirmative action track..what could possible go wrong.

Think about how much a bad-ass Putin has to be in order to survive the Darwinian process to be the head of KGB. Then to consolidate his power and finally to arrange for the power never to leave his grasp... then we have Obamalamadingdong who has had everything given to him and is the little not quite so bright kid that was given sticker for participation as if they were gold medals.

That's what we have on display. Two competitors with one trained and hardened by years of conniving, strategic manipulation of opponents and the other who drew pictures of stick figures with crayons and got a gold sticker, pat on the head and cookies for creating the spastic Mona Lisa hanging on the refrigerator.

I really, really doubt that.

Maybe they shold hire some mercenary tailors, instead?

So the Russkies are using seamstresses now? Needlepoint or crochet?

A spell-check program will never replace an Editor.

Chechens are the worst of the worst in the muzzie world.

Hope the Ukrainians know not to take any Chechens prisoner.

That joke had me in stitches.

Smells like bullcrap.
In Ukrainian news they say their MoD has dishonorably discharged the whole airbase of airmen and jailed 15 pilots.
Official reason is that they have chickened and defied orders for search and rescue of their fellow aircrews downed in E. Ukraine earlier.
The real reason must be that they don’t want to strafe their own civilians.

Who needs to send Chechens and thugs there?

Oh yes and rounding up Jews too and so forth

You better watch out for the gunner

12 posted on 05/06/2014 8:58:31 AM PDT by wardaddy (we will not take back our way of life through peaceful means.....i have 5 kids....i fear for them)
[ Post Reply | Private Reply | To 1 | View Replies]
To: Reaganite Republican
Russians Importing CHECHEN Soldiers to Sew Further Chaos in Eastern Ukraine?

They're getting into tailoring now?
Whoda thought??