He ain't got no distractions
Can't hear those buzzers and bells,
Don't see lights a flashin'
Plays by sense of smell.
Always has a replay,
'n' never tilts at all...
That deaf dumb and blind kid
Sure plays a mean pin ball

Pinball Wizard – The Who

Washington is filled with whiz kids, many of whom work for Big Guy. One need go no further than the official White House Website to gain a sense of their earnestness, purposefulness and skill. From the Presidential Briefing to the White House Blog to the White House Issues page, the site reads like a cross between an OFA campaign newsletter and a leftwing agitprop screed – butt I repeat myself. Absolutely every click on the site provides an opportunity to manipulate inform and brainwash instruct the citizens on the power and righteousness that is Obama. 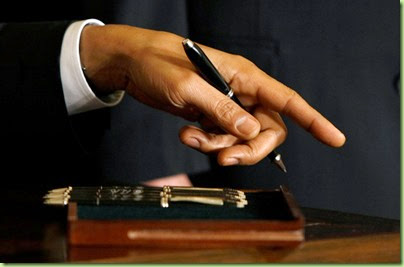 How does BO’s staff manage to run both a high powered public relations firm and the whole government? Well it isn’t easy. You have to start with really Big Brains. That means harvesting the best and brightest millennials and 30 somethings with advanced degrees in critical areas such as political science, communications and foreign relations. In return, they will provide you with all the renewable wind power you need, all generated by green energy sources.

To see what I mean, let’s take a closer look at a few of our current and former high ranking young staffers who have had their hand on the rudder of the Ship of State, so to speak.

We begin with former staffer Ben Rhodes, compliments of Neo-neocon:

First we have Ben Rhodes, fiction writer morphed into Obama’s deputy National Security Advisor while barely in his mid-thirties, with nary a bit of foreign policy experience under his belt except what he learned on the job. But he has a way with words, and that’s what we want, don’t we? 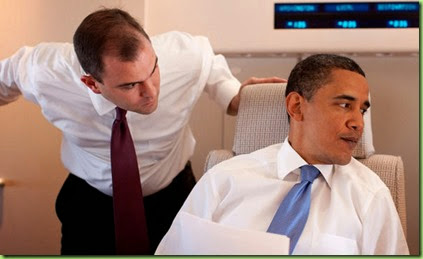 “Can I get you another pillow, sir?”

“A way with words.” That’s it, that IS what we’re all about! And how about that little Tommy Vietor? Boy, talk about a deaf, dumb, blind boy:

Next meet Tommy Vietor, the 33-year-old former press van driver and Tweeter extraordinaire who became spokesman for the National Security Council under Obama. He newly distinguished himself the other day for—well, I’ll let him tell it himself:

This, mind you, is the man who was in the situation room when Barry was…well, somewhere else; and he is also the man who was editing talking points the day after Benghazi. He seems a bit arrogant; at times dismissive, even derisive.

Another former speech writer, Jon Favreau, may or may not be remembered for penning some of BO’s famous “the oceans will begin to recede” speeches at the tender age of 27, butt he’ll be forever immortalized for this famous White House frat party shot: 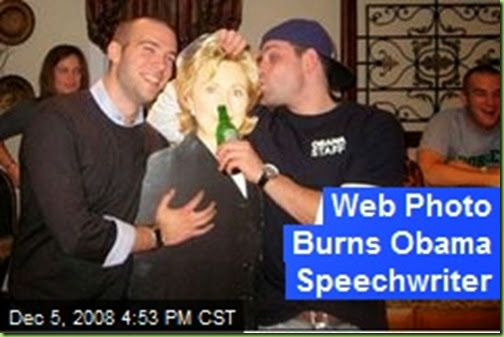 Here’s another shot of the boyz, playing beer pong at a Georgetown bar a few years back: 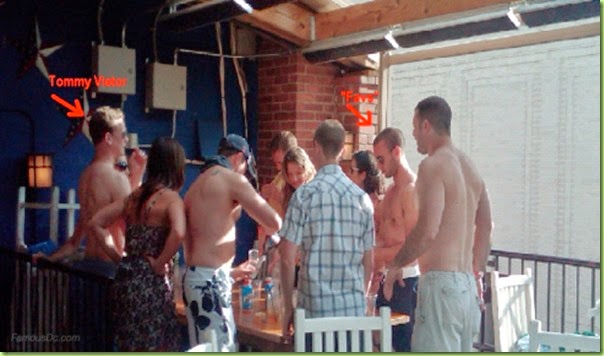 It was apparently “hot”

Favreau left in 2013 to follow his bliss as a Hollywood screenwriter; pretty much the same thing he was doing in Washington. As added insurance, he decided to also form a political consulting firm, Fenway Strategies, along with little Tommy Vietor. I’m not faulting them, they are certainly not the first of the wunderkinds to cash in.

Let’s look now at some of the current crop of advisors. Jay Carney comes immediately to mind.The Press Secretary is another master of words: 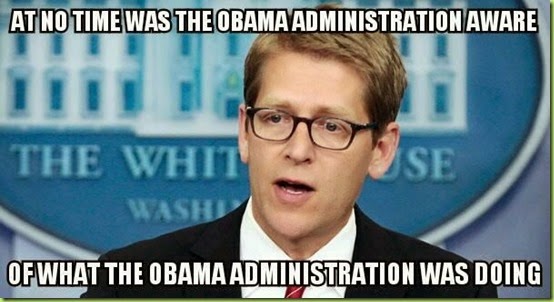 Although he doesn’t seem all that arrogant he still comes across as somewhat dismissive, even derisive, of the media from time to time. There is no disagreement over his effectiveness however. 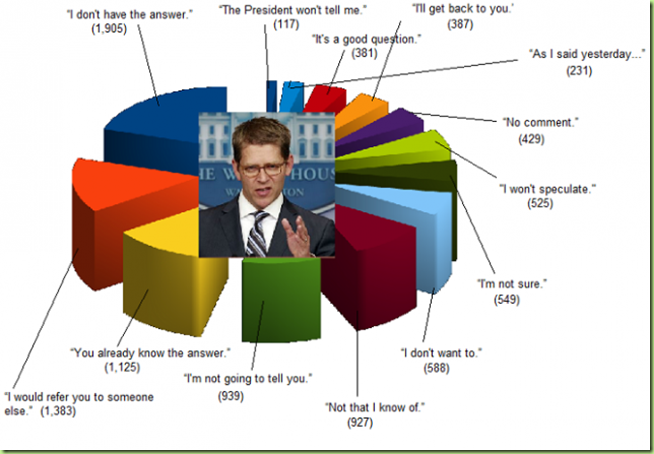 Then of course we have our current spokesmouths over at State: 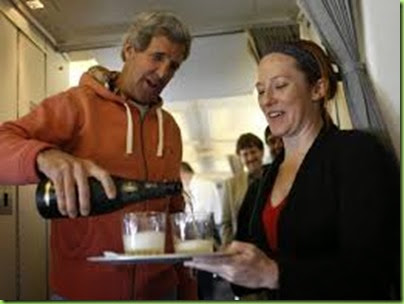 Jen and John, enjoying a champagne pour aboard a State Department plane And her equally qualified Deputy of Disinformation, 32 year old Marie Harf. Marie has an undergraduate degree in – what else? – political science, as well as a Masters degree in – foreign relations! So don’t interrupt her while she is busy not answering your questions, you annoying little twit:

If you want information you don’t have to attend White House and State Department briefings, you can look it up yourself on our umbrella Disinformation Website: WhiteHouse.gov aka “Propaganda ‘R Us.”

Here you’ll have all your questions answered, whether it’s regarding complex foreign relations issues or simple domestic concerns like education or economics. For example, you can read a recent article (cross posted on HuffPo) by Arne Duncan, Secretary of Common Core, about MO’s new program, Reach Higher. He explains the program’s focus of making sure everyone understands how vitally important it is to get a college degree. He doesn’t explain that you need that advanced sheepskin because K-12 has been so dumbed down in the interest of self esteem and equality of outcome that a college degree is now the equivalent of a high school diploma 40 years ago.

You will also find helpful posts explaining why we need to increase the minimum wage by $2.85/hour. You might be concerned about the disinformation involving the positive effect such legislation would have on the economy. Don’t worry, the really Big Brains know just enough about economics to be dangerous. For instance, they do know that the lead/lag economic principle, combined with the continued exclusion of food and energy from the official CPI, gives them enough wiggle room to delay the worst of the impacts past the next presidential election cycle. The LoFos won’t know why the price of their burgers and double decaf lattes have gone up so much until the Big Brains tell them it’s due to the hateful, racist policies of greedy Republicans. Meanwhile the newly minted college grads will be happy because the new hourly wage for their career jobs at McDonalds and Starbucks just increased nearly $3/hour.

So, what’s my point? I just want to say this to all those naysayers who accuse Big Guy’s Administration of being filled with disrespectful, immature, arrogant, inexperienced, ill-equipped, ill-prepared, dismissive, and flippant staff: that is not an accident. Birds of a feather give us the finger together. 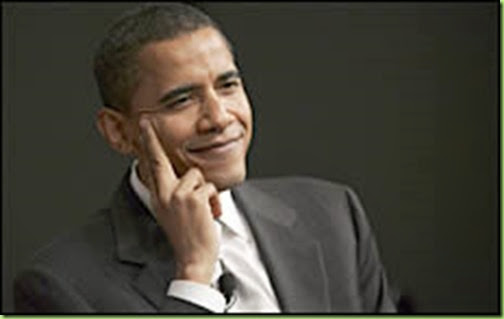 Even on my favorite table
He can beat my best.
His disciples lead him in
And he just does the rest.
He's got crazy flipper fingers
Never seen him fall...
That deaf dumb and blind kind
Sure plays a mean pin ball.!!!!!

Only twice as repulsive.

5,000 years of recorded human history means nothing to a libtard now that they’re here.

3 posted on 05/05/2014 8:02:37 AM PDT by Vigilanteman (Obama: Fake black man. Fake Messiah. Fake American. How many fakes can you fit in one Zer0?)
[ Post Reply | Private Reply | To 1 | View Replies]
To: All
MURDER IN BENGHAZI--brought to you by Obama's braindead NSA advisers and Hillary's all-girl State Dept team.

Mmmmmm....when the national security team couples w/ the State Dept team at "meet and greet" night, NSA advisor Tommy-boy gets his pick of the State Dept chicks. Luckily he's still got the press van he used to drive w/ a permit....his first job w/ Obama, before he was given US ntl security clearance.

Little Tommy’s interview with Brett Baier on what happened the night of the attack on Benghazi went viral, and has aroused strong reactions. Americans are creeped out by the these White House responses in a way that goes beyond the dearth of facts.

It’s like an inside joke they don't even bother to conceal.

Those wonderful "transparent" Obama years are pock-marked w/ his obstinante refusal to disclose even information not usually regarded as sensitive or even private. He wont even answer questions like ‘where were you born’, ‘what were your grades in college’......

..... and ‘what was the president doing on the night a US ambassador was being murdered’ has been dribbled out so reluctantly that the blowback is fierce. The braindead insiders, themselves, dont seem to know they have created a mystery where there shouldn’t be one.

"Men will never know how hard it is to do
your job when you're having a bad hair day." 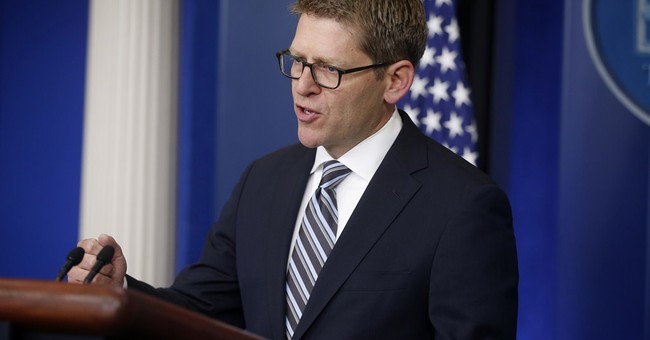 We ain’t gonna take it.