Big Guy landed Air Force Won at Schiphol airport this morning to begin his whirlwind trip to calm the nerves of a world that once relied on U.S. strength for all their defense needs:

President Barack Obama departed Sunday night for a six-day whirlwind tour through Europe and the Middle East that was supposed to be an ordinary trip to friendly countries to discuss nuclear security and trade while basking in the glow of the new Pope. Instead, as he visits the Hague, Brussels, Rome and Riyadh, Obama will be devoting his time to maintaining increasingly strained alliances with American allies across the globe, as global conflicts are placing the concerns of jittery partners on the front burner. 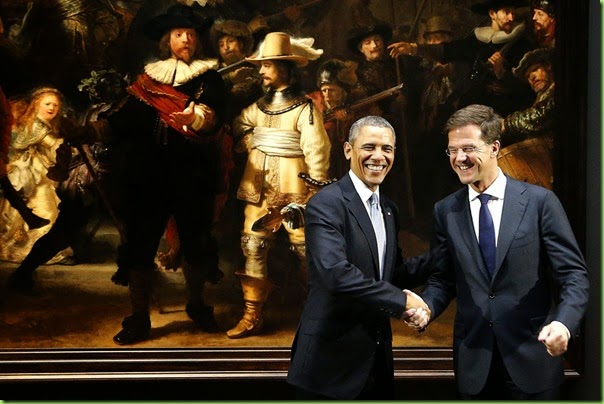 I wonder if Big Guy realizes that this famous painting of "The Night Watch," painted by Rembrandt van Rijn in 1642, is actually a group portrait of one of Amsterdam's local militias at the height of the Dutch Golden Age? There’s two things, right there, that BO doesn’t approve of: militias and Colonialists.

Never-the-less, we’re soldiering on, trying to make the world over in our own, transformed image and likeness through our strategic partners:

“If there’s a common theme to this trip, it’s the fundamental strength and importance of our alliances and partnerships,” National Security Adviser Susan Rice said Friday. “The strategic importance of this effort really can’t be overstated. From Europe to Asia to the Middle East, our ability to lead strong coalitions is essential to making progress.”

In fact, if only we had better partners, we wouldn’t have to deal with this mess at all; at least that’s what BHO told Ben Rhodes, the deputy national-security adviser for strategic communications:

Obama told me that what he needs isn’t any new grand strategy—“I don’t really even need George Kennan right now”—but, rather, the right strategic partners.

Anyway, I’m having a hard enough time keeping track of Lady M’s itinerary so I can’t give you all the details on Big Guy’s butt here’s what I’m tracking so far: after un-friending Putin on Face Book and unfollowing him on Twitter, Big Guy’s convening the G-7 in the Hague to discuss the continuing Ukraine crisis. I believe the agenda includes drafting another harsh letter. 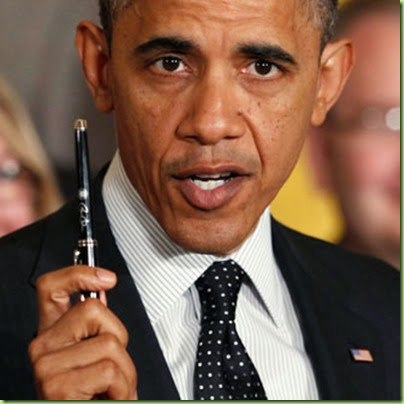 Do you see this pen? Don’t force me to use it.

Then onto the nuclear summit where BO will “touch Indians” with Chinese President Xi Jinping, just a few days after Lady M met with him in Beijing and it was revealed that the US National Security Agency spied on the leaders of China. So that should be fun.  Maybe they can talk about their wives. 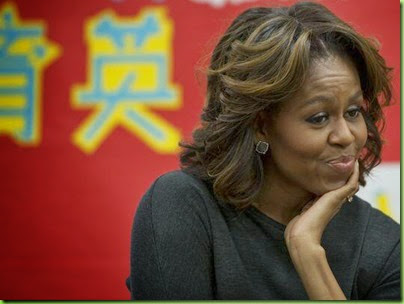 Are we having fun yet?

So, while Lady M continues her spring “soft diplomacy” tour of China,

…BO will be fixing all the troubles in the world. To that end, he’s meeting with the Pope. Although not Catholic himself, he’s heard of Catholics. He’s hoping to get a good optic with Pope Francis that the Dems can use to promote their mutual plans to eliminate “income inequality” in the upcoming mid-terms. Afterwards, he intends to school the Pope on the importance of free contraception.

The final leg of Big Guy’s trip will be a visit to Riyadh where I understand they’re upset about BO’s decision to suspend military aid to Cairo. He’ll meet with King Abdullah to discuss Syria, Israel, Palestine and Iran; it’s expected he’ll advise the King that he has to be a better “strategic partner.”  Pretty sure that’ll go well.

I wrap up today’s post with this related Little Known Fact: Rembrandt’s “Night Watch” is considered so important to the Dutch people that if you look at the floor directly below the painting you will see the faint outline of a trap door. It is an “escape slide” designed in 1934, to allow the painting to be swiftly moved out of danger in case of fire, or other threats – say another World War and/or nuclear holocaust.

And now you know why Lady M’s always been so fixated on finding those secret trap doors. 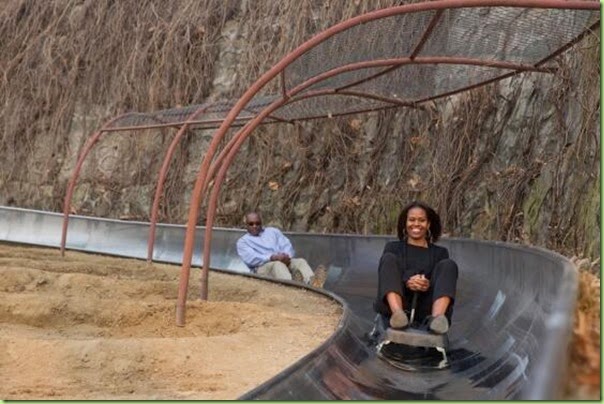 Woooo! I think she finally found one of those trap doors! Hey- why’s it going down hill?!

'Progress' used to be such a desirable concept.

Slimy little metrosexual weasel in mom jeans is more like it.