This whole Bossy the Cow thing is very confusing, so make sure you’ve had your coffee. 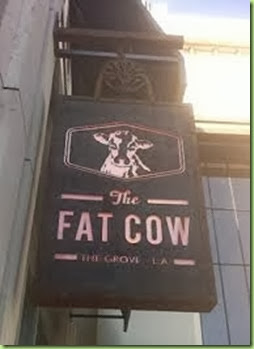 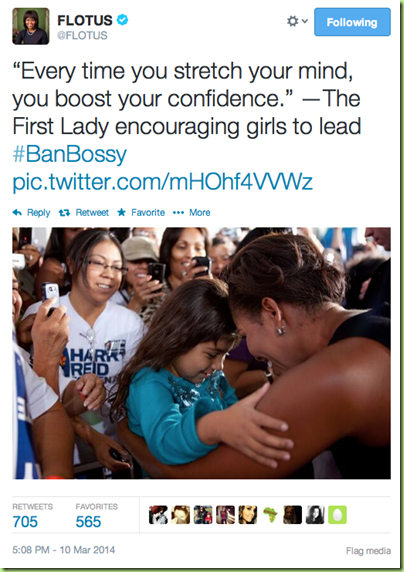 I thought it was one of those made-up urban legends until I read Doug Powers article, “Go figure: ‘Bossy’ not a horrible word 3 months ago but now FLOTUS wants it banned.” The #BanBossy campaign is a joint effort of the DNC’s fight against the GOP’s War on Women, 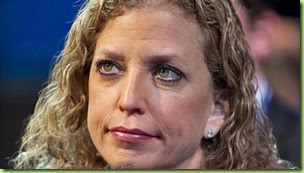 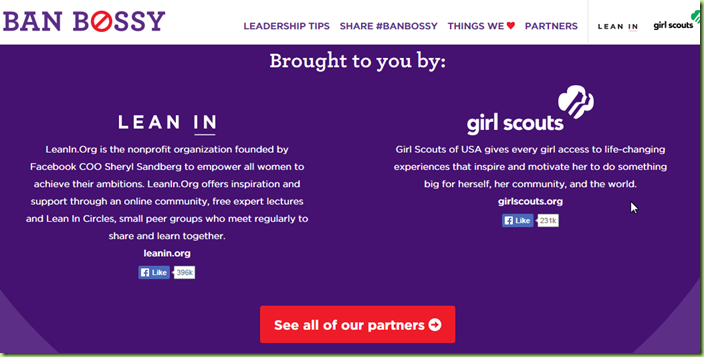 and Sheryl Sandberg, COO of Facebook and author of “Lean In: Women, Work, and the Will to Lead,” the little book of feminist wisdom and other tropes. Sheryl’s using #BanBossy as a marketing campaign for her book, which holds forth the same argument against calling girls “bossy:”

Sheryl Sandberg has long criticized the use the of the word "bossy" to describe young girls who are assertive. Instead, the Facebook COO has urged people to forgo the word with all its negative connotations, and instead describe these girls as "feminist" or displaying "executive leadership skills." 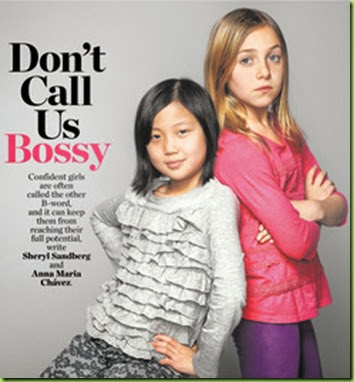 Here’s where it gets confusing: apparently the group-think on this is if you call a girl “bossy” it’s sexist or something. So let’s call them assertive. 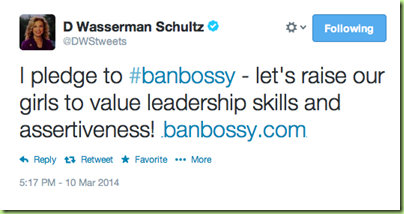 The argument, as laid forth in the Wall Street Journal article:

Sandberg — the chief operating officer of Facebook and author of the best-selling book “Lean In” — is spearheading the launch of a campaign today to ban the word “bossy,” arguing the negative put-down stops girls from pursuing leadership roles.

Because if you call a girls “bossy,” it will kill her ability to act assertively and be a leader in the executive suite. So JUST STOP DOING IT! - NOW! That sounds pretty bossy to me.

Given that everyone from Lady M to Beyoncé has jumped on the bandwagon, it might be impolitic of me to point out that being bossy is different from being assertive. Here are the synonyms I found for “bossy:” autocratic, cocky, dictatorial, high-handed, imperious, tyrannical, oppressive. Butt I didn’t see “assertive” anywhere, which has it’s own list of synonyms: confident, decisive, emphatic, forceful, insistent, self-assured, self-confident – none of which sound necessarily “bossy” to me. “Bossy” is more like a specific, ego-centric, know-it-all, my-way-or-the-highway sort of behavior most often associated with children (of either sex) who are in need of a little adult supervision. They need to be taught and coached so their behavior is directed in more suitable directions and their basic instincts molded into more effective behavior; otherwise they’ll remain social pariahs for the rest of their life. 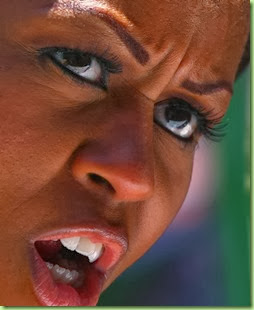 So let me make this perfectly clear: just because Bossy is a female cow, 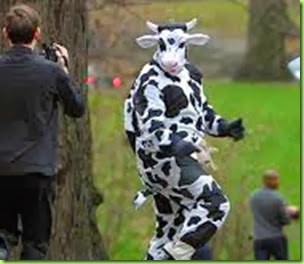 this is not exclusively a female problem. For example, if we go through the synonyms for “bossy” – 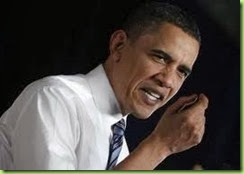 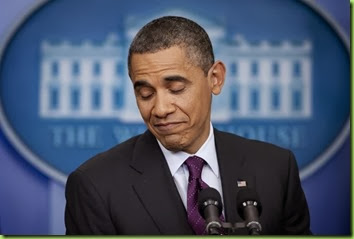 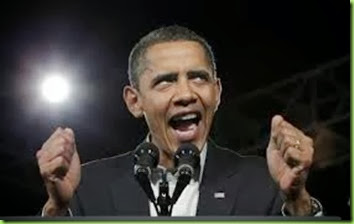 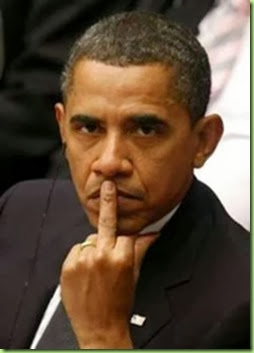 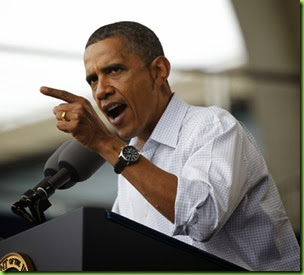 …we find that they apply equally to men. And not always in a complimentary manner either. I leave it to you to determine if they connote leadership skills.

In the meantime, #BanBossy is off and running. I find it remarkable how quickly the herd of cows bossy gals jumped on the haywagon (don’t ask me what Condi’s doing in with this group: I’m guessing it’s a misguided commitment to the Girl Scouts). It’s already so viral that it’s almost like a MSM sound-bite rolling through the echo-chamber.

In summary then, I think this whole bossy cow thing is overhyped. Men can obviously learn a lot from bossy women, 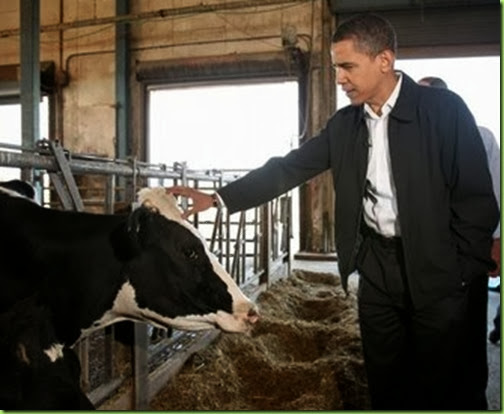 I’m so gob-smacked by the whole thing all I can say is: 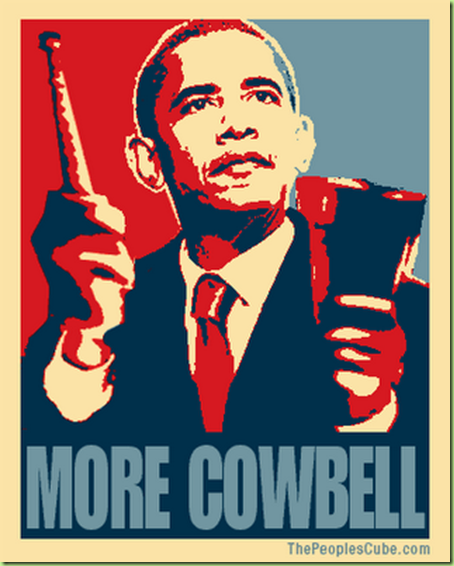 Telling people what words they can and cannot use is, well, bossy.

Wow. If these little brats don't want to be called "bossy", they should quit being bossy. I bet they've never heard the word "no", and think the world owes them a living. They remind me of:

I predict this thread will udderly degenerate into a pun war.

“Boss” or “Bossy”, as applied to domestic cattle, refers to the Greek name for the genus Bos, and is referenced in geography as the strait between the Black Sea and the Sea of Marmara, the Bosporus, or the “ox ford”.

“Boss” in reference to cattle has been part of the language for some 3,000 years, and perhaps even longer. And the Chicago Bears linebacker can overturn that in a remark from the White Hut in which she is squatting?

I noticed when I was growing up that the girls who we considered to be bossy were actually bullying others. So bullying is now okay according to these pushy women, and the new name for it is bossy.

I long for the day when the left can make up its mind without talking out of both sides of its mouth.

Am I the only one who didn’t know this was a problem?

Only so we can see if you can be cowed into submission.

Why are you insulting perfectly nice female canines by misapplying the word “bitch?”

Nah...
I like the word; plus it creates a useful new name for FLOTUS: "BM"

I haven’t heard the word “bossy” since the 70s.

14 posted on 03/11/2014 10:07:51 AM PDT by Not A Snowbird (Go HAWKS!!!)
[ Post Reply | Private Reply | To 1 | View Replies]
To: NOBO2012
The government must use crimestop more aggressively in order to avoid thoughtcrime. Scanners will be placed on every street corner in an effort to digitally recognize facecrime just in case a person is thinking about saying the word “bossy” or any of the other 4516 words currently banned by the government.

Have a PC day!
~ your friends at Minitrue

Bossy and thin-skinned seem to go together.

Any woman can be a leader, without being "bossy", or a "bitch". But, like a man, she has to find that balance.

We have a number of words to describe a man that tries to lead, without earning respect as a leader. But, it's not politically incorrect to use those words.