Sorry you couldn’t all have been here for the “Women of Soul” concert on Thursday. Butt good news: you little people can vicariously enjoy the Women of Soul: In Performance at the White House on April 7 on PBS (9 p.m. ET/PT, times may vary).

The festivities began in the afternoon with Lady M, some of the Women of Soul, and students from across the country for a workshop called "I'm Every Woman: The History of Women in Soul."

And wouldn’t you know it? The one and only time Lady M’s Nickelodeon soul-full get-up might have fit right in… 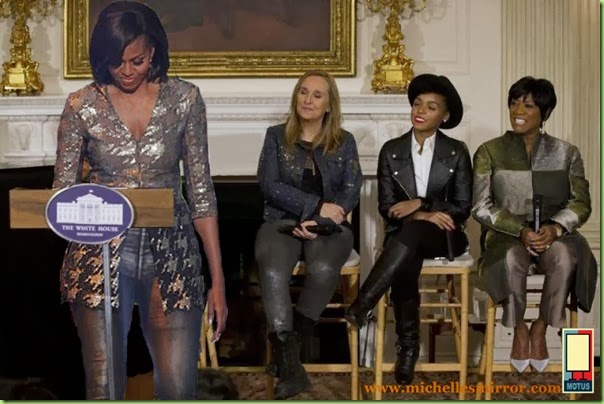 she chose to wear one of Granny R’s old dusters instead. 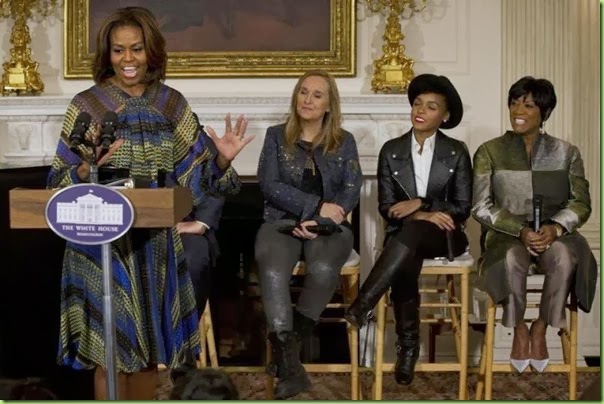 And believe me, it was no more charming in the going than in the coming: 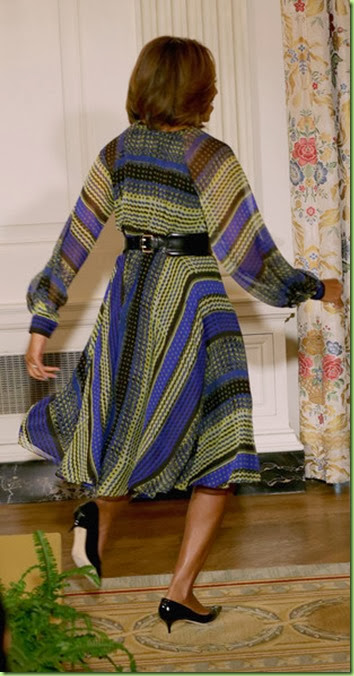 At the workshop Lady M shared this sage advice with the youth of America:

I think what she meant was “follow your heart.” In Lady M’s case, were still in-search-of our bliss.

Anyway, when the main event got under way that evening, MO’s frock choice for the soul sister session started to make sense: Lady M swapped Granny the housedress for her Nickelodeon outfit! Damn, that woman is talented with her little Singer sewing machine! 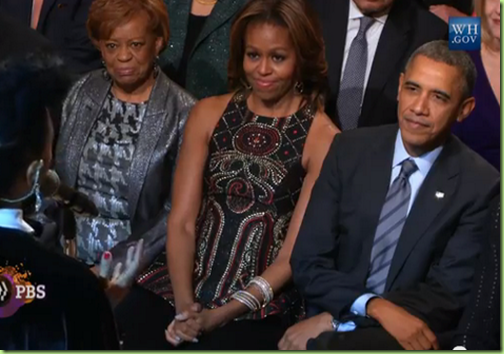 Butt you want to hear about the concert:

“What a lineup!” Obama declared at the outset of a concert that featured a generations-spanning array of soul singers that stretched from musical legends Aretha Franklin and Patti LaBelle to 20-year-old Ariana Grande.

Obama paid tribute to Franklin for turning her signature song “Respect” into “a rallying cry for African-Americans, women and then everyone who felt marginalized.” [ed. forever memorialized in the great movie, The Blues Brothers] 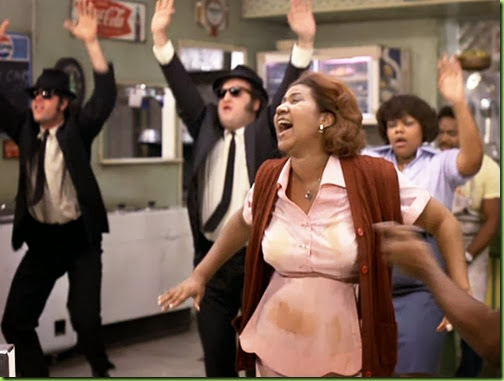 The pumped-up audience gave a hearty laugh but was more than willing to forgive the president for spelling it “R-S-P-E-C-T.” [It was totally TOTUS’ fault, he recently uploaded the new Common Core spelling curriculum]

First up in the East Room lineup was LaBelle, with a thundering delivery of “Over the Rainbow” that had the audience on its feet. 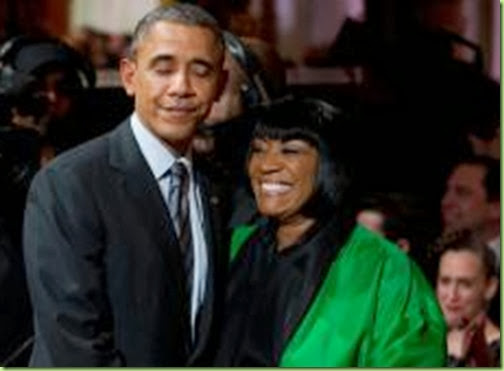 It was a mutual admiration society of sorts as LaBelle thanked the Obamas for their tenure in the White House, declaring, “Baby, you got swag!” 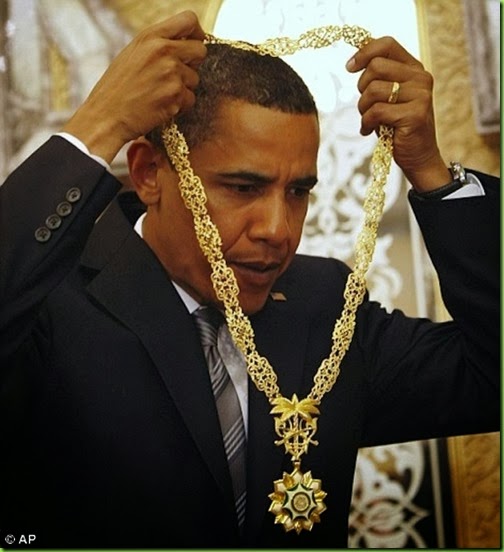 The emotional high point came when Franklin, 71, sauntered in, gave a shimmy and declared “Let’s have a party.” Then she went right into “I Never Loved a Man (The Way I Love You).” She was back later to close down the show with what Obama called “one more treat” – a slow, soulful rendition of “Amazing Grace” that turned rowdy at the end. 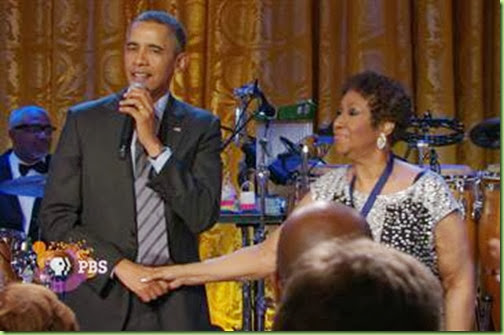 [ed. Note: Aretha has ditched the blonde prima donna hair for a short, natural crop, and the sleeveless look for covered shoulders. Trendsetter? We can only HOPE.] 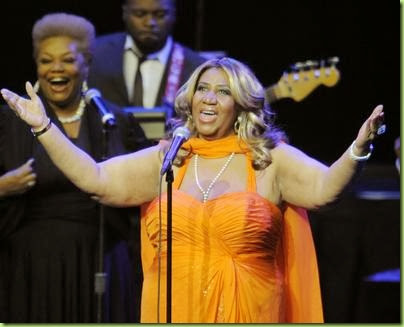 Butt hey - in presidential years Thursday was a long time ago! Since then we’ve 1) cast another harsh stare in Russia’s direction and 2) flown to Florida to empathize with the students of Coral Ridge High School who can’t afford to go to college without BO’s financial assistance. Which he’s more than willing to give them in this, his “year of (executive) action.” 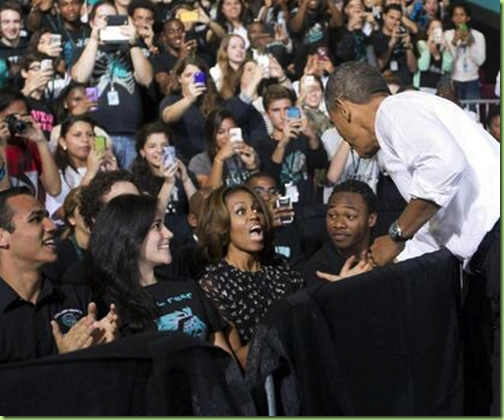 Oh my gosh! Look who’s here! Hey, why don’t we just make this a long weekend?

Like Lady M, BO took time to impart some hard-earned wisdom to the young ‘uns of Coral Reef:

"When I was your age, I didn't know what I was doing," President Obama told the students. "I was lucky if I got out of bed on time."

That was partially due to the fact that he often hadn’t gotten to bed yet: and not because he was studying. 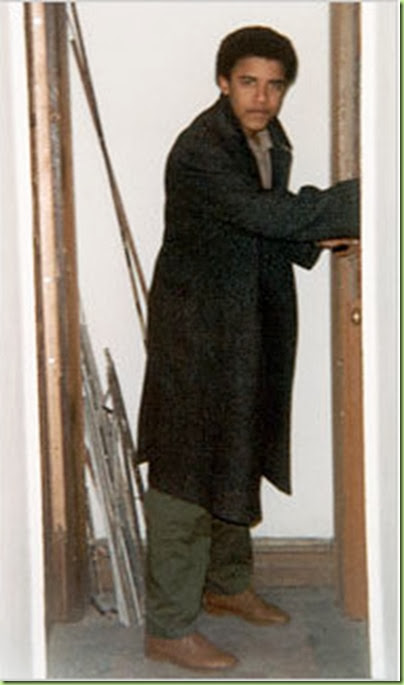 And speaking of Keys…surprise! We decided to go ahead with our mini-vacay in the exclusive Ocean Reef enclave in Key Largo after all! Since we were all down here any way.

Butt let me assure you that we will be treated just like ordinary people here this weekend: we are going to lose an hour of sleep tonight too. I just HOPE we don’t get any of those 3:00 am phone calls. 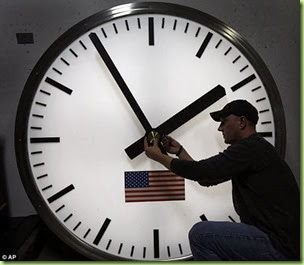 She is such a rag and such a “I hate whitey”.

Michelle: Tell them to pick up their pants cuz you look like the slobs that you are and maybe even finish high school so you can buy your own $200 sneakers instead of using that good drug money.

Unless I’m mistaken, I believe “Michelle” in French means “One classy broad.”

This from those that party & vacation continuously at our expense.

“Do it until your butt comes off.”

she needs her butt to fall off...

she is chucking up and it shows..

“Hypocrisy is the homage vice pays to virtue’’.

Absolute trailer park trash. What a classless first lady. What a perfectly matched couple they are.

These words really mean a lot from a man on vacation - again.

I read that and I literally LOLed.

In the orange dress pic it looks like Aretha stole the Hulkster’s old arms! (”And wat-cha gonna do Barry when Aretha’s 24 inch pythons run wild on YOU”!!?)

I Want To Do It-Bobby Comstock

Moochelle in a another Goodyear belt fashion show.

hes will never be my age and hes not likely to ever know much more than he did when he was a yout!

His wife may be even more clueless than he is.