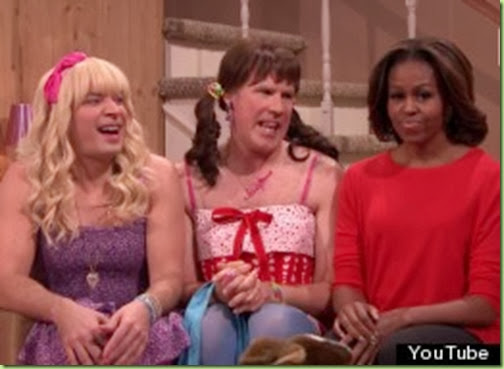 “Michelle Obama is hilarious, gorgeous alongside Jimmy Fallon and Will Ferrell on 'Tonight Show'”

They’ve already mom-danced and potato-sack-raced, so the logical step for Michelle Obama and Jimmy Fallon was to… squeal like teenage girls?

Sure. Because how else do you make the FLOTUS accessible to the highly desirable 18- 34 demographic that we need to pitch Obamacare to? The skit was a guys-in-drag makeover of the old SNL classic Wayne’s World, except, not funny. Either that or I don’t know how to appeal to the desirable demographic, which I suppose is a possibility.

Anyway, the skit, including Will Ferrell, was set up as a Valley Girl sleepover and was titled “Ew!” That pretty much sums it up. I’d say “watch it” butt I can’t, in good conscience, advise that.

It included a dance party, with plenty of twerking: 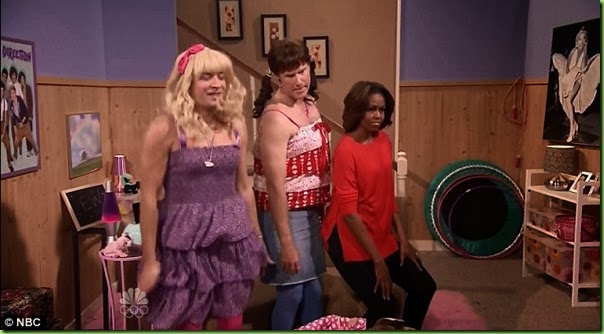 Not surprisingly, Lady M was the best!

After the hilarious skit, Lady M chatted it up with Jimmy, about the White House and “stuff” including the Wee Wons, who she said “want nothing to do with us (the Obamas).” She said that they just want to be left alone so they can “be normal.”

For the interview, in case you were unable to tune in for whatever reason, we wore palazzo pants, a sleeveless (because it is February) scooped-and-draped neck top anchored to our pants with our favorite radial tire boob belt. 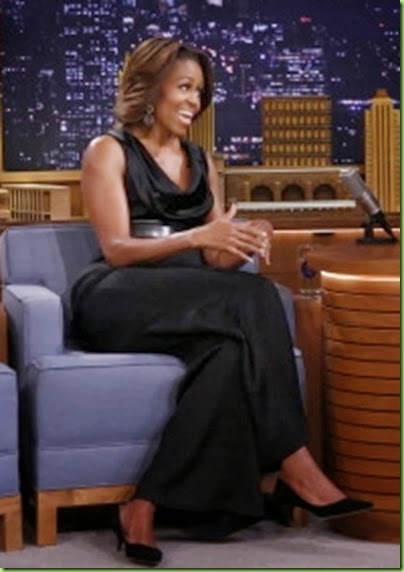 Another historical first: Lady M is the first First Lady ever to utter the phrase, “Yo, babe. Hook me up” in public.

Then we talked about the importance of signing up for Obamacare, duh, and No Child’s Fat Behind. Other than that, the only thing we learned from last night’s appearance is that MO’s first job was in a book bindery. It was a job she found to be so “ew!” that it “sent her ‘schtrait to college’.” If I understood her correctly, she managed to perform the brain numbing work in the bindery for 2 whole weeks in order to develop an appreciation for the little people who do this kind of work every day of their lives, like her Dad.

During that time she also concluded that, instead of being one of the little people, she wanted to attend Princeton and Harvard Law School in order to get her Juris Doctorate so that one day she could “voluntarily surrender” her law license in order to follow her real bliss. 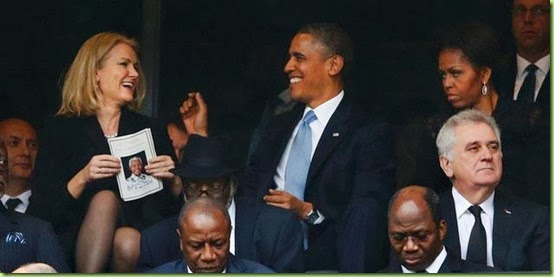 “How’s that workin’ out for your?”

And the rest, as they say, is history. I’m sure Martha Washington, and Johnny Carson, would be proud.

There ought to be rules about showing these types of pictures so close to lunchtime. Really.

This shows women need whoopie too! When there is none at home ... Well, moochelle goes looking. 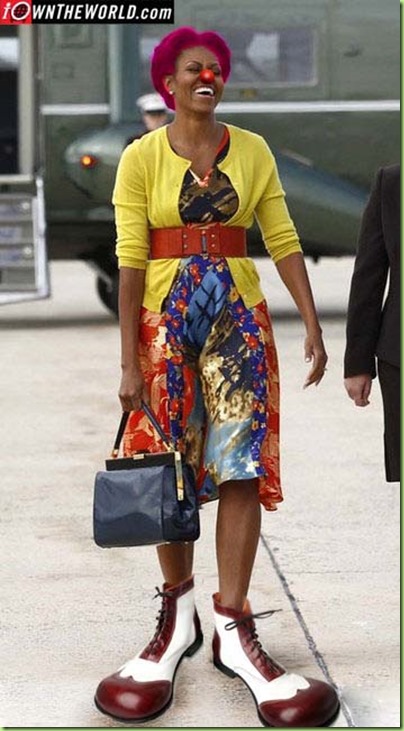 There once was a time when First Ladies conducted themselves with dignity and class. Jackie Kennedy, Nancy Reagan, and Laura Bush (just to name a few) would have never participated in anything like this.

makeover of the old SNL classic Wayne’s World, except, not funny”

Thank goodness for the Oprah Clinic.

America’s sweetheart.
Any bets she’s a regular on The View starting Jan 2017?

Nope...I think she and Oprah will form a similar group. We need more brain washing.

We need parental control turned on for NBC and PMSNBC and CNBC. Now that they have purged any possible negative or funny thing against Obama and big socialist govt.

13 posted on 02/21/2014 10:36:23 AM PST by nascarnation (I'm hiring Jack Palladino to investigate Baraq's golf scores.)
[ Post Reply | Private Reply | To 11 | View Replies]
To: GreenHornet
Moochelle the Wookee has brought the exalted office of First Lady of the United States to the gutter level. She has no more class or dignity than a cleaning lady. And most cleaning ladies I've seen still eclipse her in classiness. Indeed, Eleanor Roosevelt, Jackie Kennedy, Nancy Reagan and Laura Bush were REAL ladies of obvious breeding and elegance. They oozed class and dignity, unlike this poor git.

Accompanied by two really classy ladies (notice, not even a wrinkle in their elegant dresses, not a hair out of place, their shoes match their dresses), the Wookee stomps up the stairs in a wrinkled blouse completely unrelated to her wrinkled skirt (the style of which serves very well to accentuate her wide load rear end), shod with shoes that don't begin to match her "ensemble". Next to the other women in the picture, she really does look like a cleaning lady out in her Sunday best. Except a cleaning lady would have better taste in clothing.

I watched part of it...like watching a car accident in slow motion. It was AWFUL.

Last night was the last time I’ll ever watch Fallon - I hope he loses all the conservatives who watched Leno.

These comedians are all apparently liberal. The only political joking they do is making fun of conservatives. They never make fun of liberals or Obama. It’s a pain to watch these shows because they are so flagrant in their bias. And it’s all humor they will say. But one side is always the target and one side can never be lampooned.

Apparently, one comedian died because of it...

No one wants to be next.

What did the band leader play, “baby elephant walk?”

Jimmy Fallon jumped the shark.. And it only took 3 days.