Big Guy went to Sunnylands, the former Annenberg estate at Rancho Mirage, last week to command the oceans to recede faster in order to end California’s drought caused by global warming. He also called for more federal dollars for a "climate resilience fund" to pay for “research, preparation and infrastructure to deal with extreme weather and new conditions associated with shifts in the weather” (also known as “seasons”). 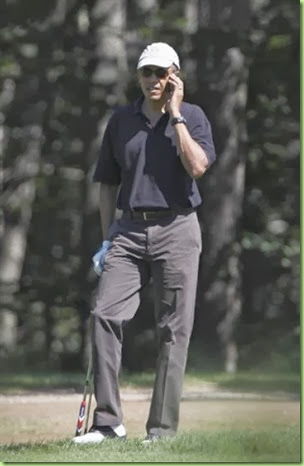 “Yeah, I need about a billion dollars for snowplows in California.Know anybody who can do that?”

It’s all part of his "Climate Action Plan" that Big Guy unveiled last summer, and if Congress won’t act on it to end California’s drought, he might have to take action on his own and impose a country-wide water ban. 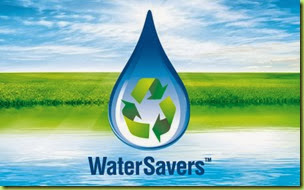 Although I don’t think Lady M is going to like that very much: 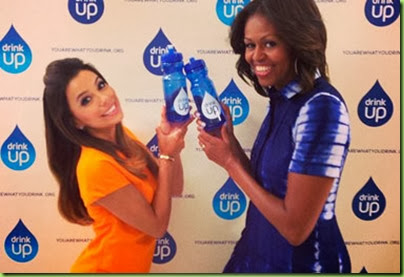 From our “Keep Carrying that Water- the Elephants need it” campaign

Anyway, Big Guy says that global warming has caused California’s reservoirs to dry up and only the government can save them. Others contend that, well, that’s not true:

Actually, the problem for Central Valley farmers is that their water got taken from them by a federal judge, who put a baitfish ahead of human beings. Central Valley’s water-management system was designed to deal with droughts that last as long as five years, but the reservoirs that held its lifeblood got emptied into the ocean to rescue the Delta smelt. It began five years ago, and as Investors Business Daily reports, the locals remember it better than Obama does (read the whole thing).

Butt frankly, don’t take any of this global warming/drought stuff too seriously; it was just an excuse – as was the meeting with King Abdullah, to come out west to play golf with some of the boy friends from back in the day. And what a swell place to hook up! Sunnylands, now more or less appropriated by Barry as Camp David West for diplomatic meetings - and golf, of course.

Last June’s meeting here with Chinese President Xi Jingping worked out so well we decided to do it again. The two presidents met, discussed some important high level diplomatic stuff and then we hustled Xi out of here to make room for the 3 buddies from Hawaii ( Mike Ramos, Bobby Titcomb and Greg Orme) and a weekend of golf. Same deal this time: met with King Abdullah II, discussed some important stuff, and then got him the hell out there to make room for the buddies big golf weekend. It’s seriously nice work if you can get it. 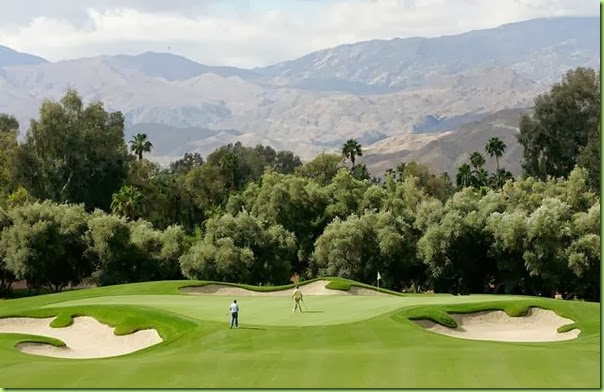 I just hope Big Guy isn’t getting too used to all of these casual tie-free meetings however. First, we saw the Casual Won with the uptight O’Reilly in the superbowl interview, and now tieless with King Abdullah:

Because I’ve been reading in the Wall Street Journal that casual may be over. Men are moving back to more formal dress: something to do with a reactionary backlash that happens whenever you have an extended economic downturn. Apparently people are beginning to think of 5+ years of economic malaise as “extended.”

Anyway, not only are 3 piece suits said to be making a comeback, butt guess what else? Briefcases! Now that’s a welcome trend. “Messenger” bags and gym bags just don’t seem to telegraph an “I’m serious about this job” vibe, which is important if you’re carrying the nuclear football, if you know what I’m saying:

BRIEFCASES ARE SERIOUS. Always have been. It's hard to imagine the daily nuclear launch codes, which traditionally have accompanied the POTUS in a briefcase, being shoved into a messenger bag. 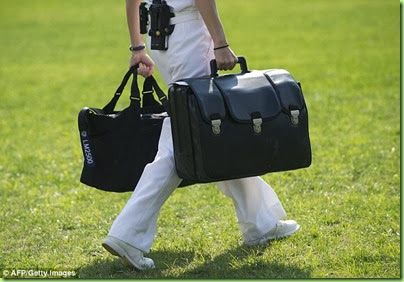 The idea of Don Draper carrying a gym bag into Sterling Cooper & Partners is downright incongruous. 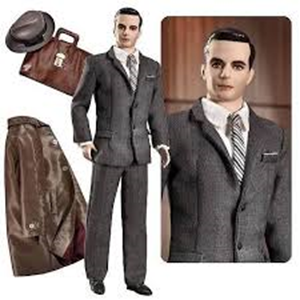 The Don Draper Barbie collection, complete with fedora and briefcase

People who know about these things weighed in with some very strident opinions:

"Should a man wearing a suit carry a proper, equivalently formal, ergo, style-appropriate, briefcase?" said Alan Flusser, a custom tailor and author of "Dressing the Man: Mastering the Art of Permanent Fashion." "If he's interested in projecting an in-command, finished look, I would opt for 'yes.' "

Others, like Cliff Moskowitz, owner of a a private-equity firm (aka “vulture capitalist”) in New York, put it more directly: 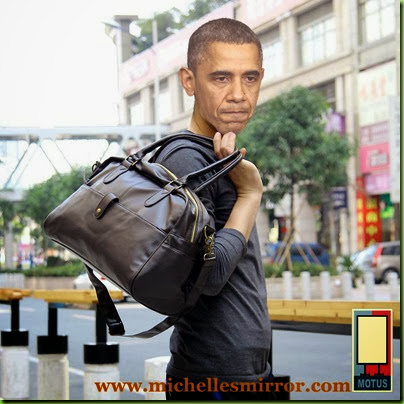 So much for that assumption...

“If he has a backpack, I assume he doesn't care.” 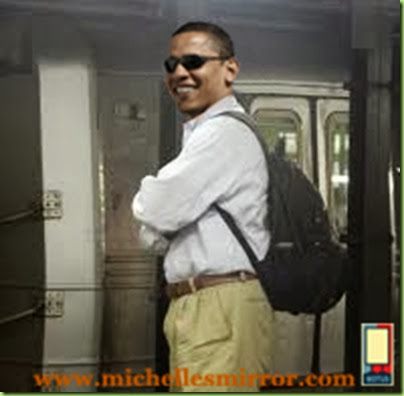 Butt what are we to conclude if a man has…his own bag man? 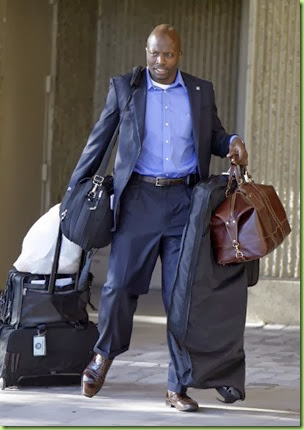 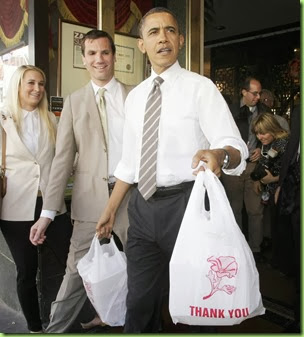 Or has a spouse in a potato bag…no wait, that’s a different post. 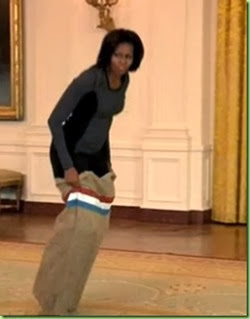 Or what if, say, a man really doesn’t need a bag at all? What if all he really needs is a phone? And a pen? 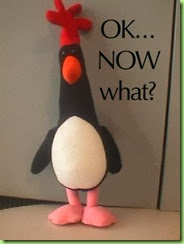 I don’t know. Maybe it’s time to rewind? Just in time? Maybe we need to find an old soul who can carry both a brief case and gym bag – at the same time? 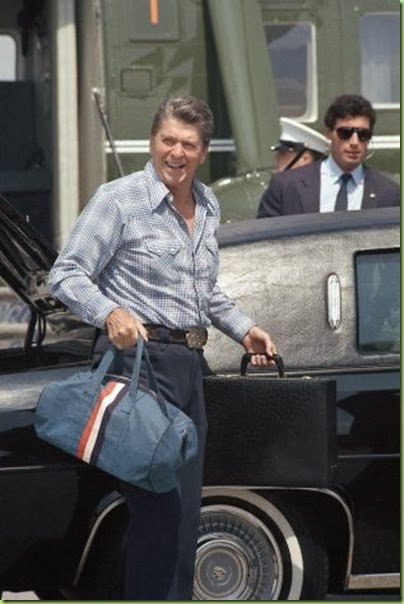 And not make it appear as though it’s a burden? 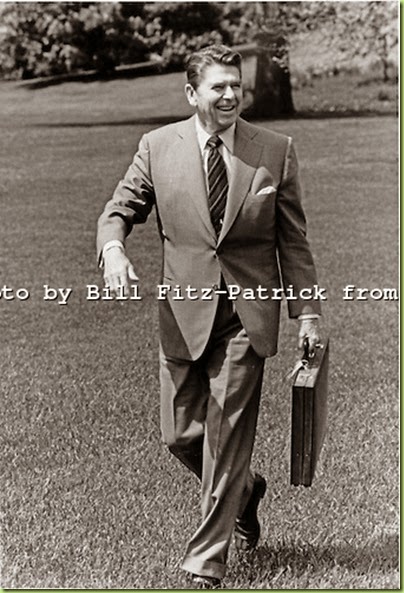 A man who will use his pen only to sign laws duly passed by Congress (which he’s read), not to write his own. 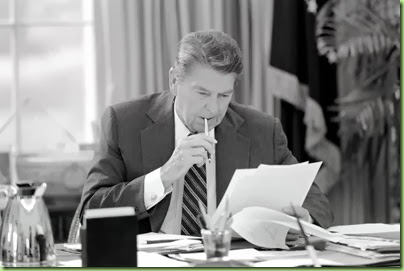 I’ve no idea where we can find a man like that around here, butt if you spot one, let me know. Because briefcases are definitely back in style. And Lord knows, we could use a little style around here. Boom-Chuck-A-Luck-A. Warning: Skip this video at your own peril. It’s Monday, and you need it.

Linked By: Larwyn’s Linx on Doug Ross@Journal, and Clarice Feldman, and Abby L Call on facebook, Thanks!

Well, you see, ‘nuclear winter’ didn’t pan out for them, and ‘global warming’ was not going over well in the middle of major ice storms, so what do you do when you want to make a feral case out of weather changing? You can’t demand $billions to combat changing weather,, but hey changing ‘climate’ has a nice ring to it. And whether it get hotter or colder it works!

EVERYTHING man does makes the ‘climate’ change. And we need MORE FUNDING to stop it. Lot’s more.

If global warming was really a life and death issue for the planet, and CO2 emissions were the primary contributor to global warming, wouldn’t someone who is really serious about doing something about global warming go after the greatest CO2 emitter (i.e. China) instead of exempting it from global guidelines.

Here’s a proposal for our progressive friends. Let’s immediately levy a 50% tariff on all goods imported from China to punish them for the CO2 being emitted into the atmosphere. We can call the tariff an “import carbon tax.” The tariff would have the following impacts:

1) Export driven Chinese factories would have to raise prices to cover the cost of the tariffs. Many would become uncompetitive and go out of business. When a factory shuts down, it no longer pollutes or contributes to the demand for electrical power from coal fueled central electrical power plants. Less demand for electricity equals less coal fueled power generation in China. This equals less CO2 and less climate change. What’s not to like if you are a climate change advocate?
2) Dramatically higher prices for imported products would increase demand for domestically produced equivalent products. US electrical power plants are cleaner than Chinese power plants so incremental demand for energy would be produced in the US with less emission of greenhouse gases. Again, big win for the climate change advocates!
3) More domestic manufacturing equals more middle class jobs, lower unemployment and more tax revenue to government at all levels in the US. It also results in a lower trade deficit for the US. Unions should love this.
4) Factory closures in China result in unemployment and social unrest as well as reduced tax revenue to fund the current massive military buildup. To the degree China is forced to reduce military spending due to lower exports, the national security of the United States is improved without US taxpayers having to spend another dime on the defense budget.

And why doesn’t The Government ever go after BIG COLA!!

Don’t they know they actually ADD CO2 TO THEIR PRODUCT ON PURPOSE!!