A progressive leftist known for his blatant cronyism, corruption and scandal hit the shores of the Potomac this week; nobody noticed. 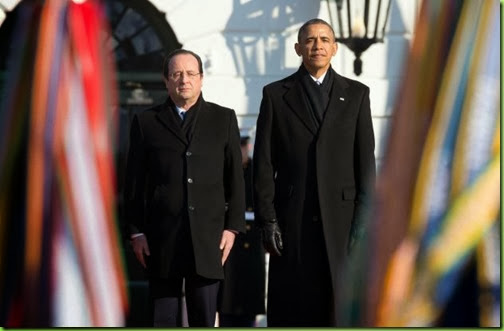 Butt buy a new dress, throw a big party, and everybody sits up and takes notice. 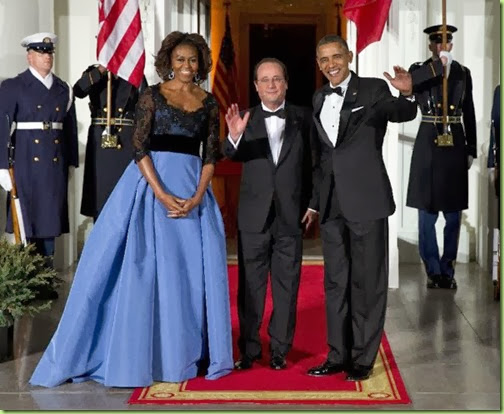 If I may say so, I think it’s a lovely dress; designed by Carolina Herrera and fashioned from luxurious fabric in black and liberty blue.

Although I’ll grant you, it does show better “standing” than “mooving.” 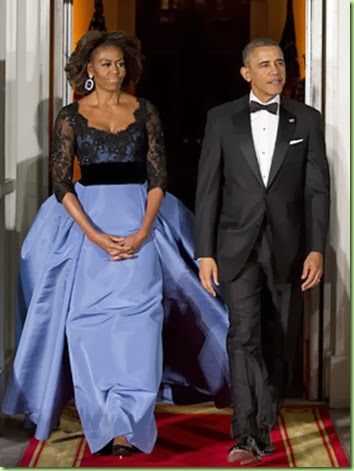 Still, do you see what proper fit and sleeves can do for a woman? Compare: 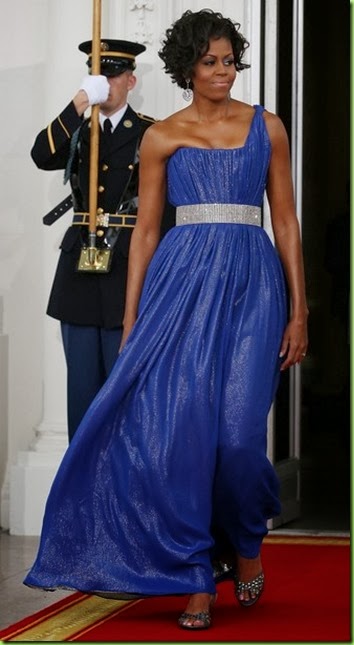 So let’s have no more complaining; as usual, it could have been much worse.

Unfortunately, since François’ most recent peccadillo - involving another woman – resulted in the breakup of his 7 year affair with another “another” woman, for whom he left the mother of his children. 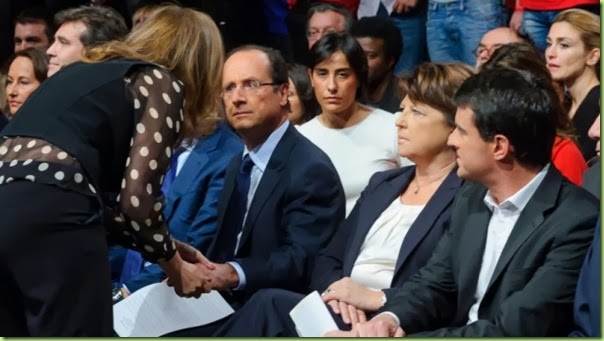 On the occasion of his election, Hollande is congratulated by his then current lover, Ms. Trierweiler while sitting next to his former lover (and mother of his children) Segolene Royal, and current lover Julie Gayet (far right, back row)

As we’ve discussed before, Hollande is proof that Henry Kissinger was right about power being the ultimate aphrodisiac: women sexually attracted to powerful men by the vicarious power-surge associated with riding the proverbial coat tails. 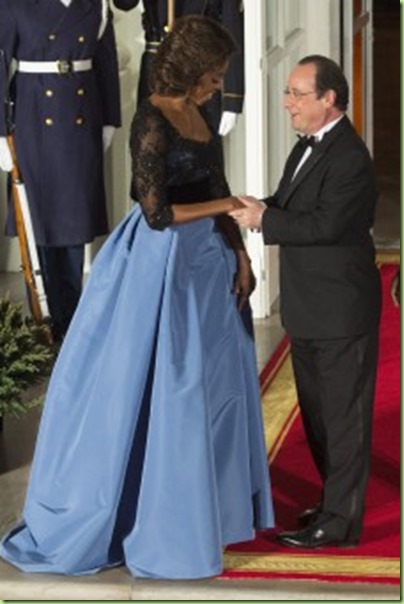 And in Hollande’s case, some very short coat tails 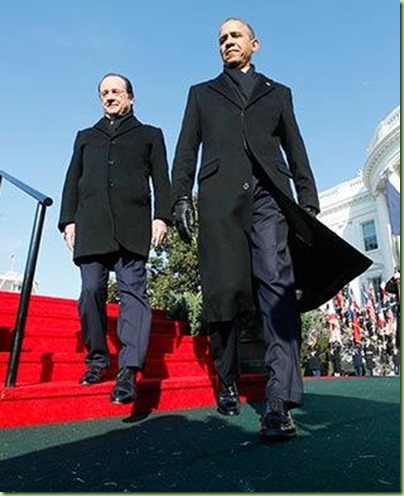 Now, on to the intimate dinner for 350 we threw for our little French friend: under the bigtop on the south lawn. Naturally pictures were banned butt I snagged this contraband for you. That’s “Big Guy” way up in front. Worth a short trolley ride to attend, no? 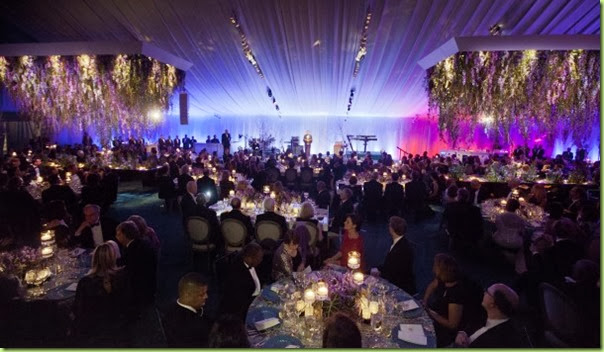 The big top was all done up in mauves and blues, reminiscent of Monet’s Water Lily's paintings (he was French, you know!). 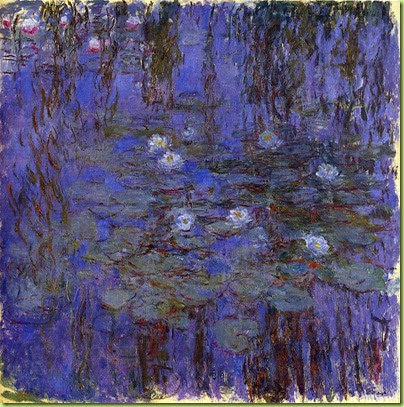 Lady M sat between François and Stephen Colbert – what a hoot! Mary Jane Blige sang her little heart out butt, sadly, no dancing. Since the French President arrived stag, the protocol chief decided dancing would be too awkward. As if that’s ever stopped us in the past. 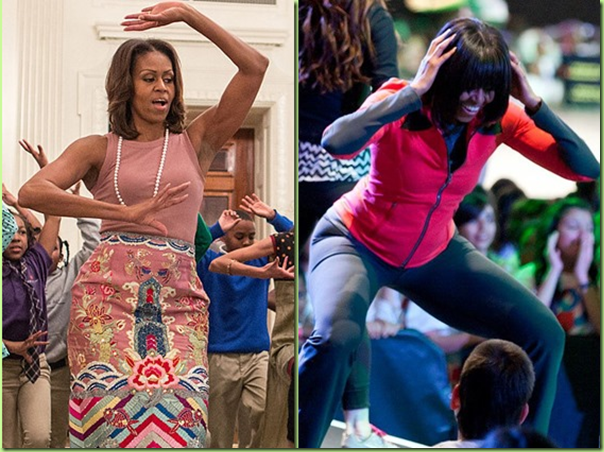 The menu was elegant as usual, starting with cocktails (on the “short trolley ride”) and smoked Maine salmon, and moving on to a first course with American Osetra Caviar (from fished raised in tributaries to the Big Muddy!), a "Winter Garden Salad," billed as a homage to Lady M’s Kitchen Garden. As you might imagine, in the middle of this Arctic Vortex our winter garden crops are not terribly prolific right now. In fact, there were barely enough weeds to go around, so we tried to magnify their effect (like unemployment payments) by serving them in a goldfish bowl. 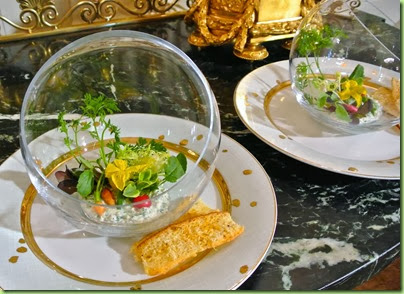 “Garden” salad in a “terrarium:” clever!

Naturally there was “Dry-aged Rib Eye Beef”, from a family farm in Greeley, Colorado, served with a “Jasper Hill Farm Blue Cheese Chip” and accompanied with “Charred Shallots, Oyster, Mushrooms, and Braised Chard.” And for dessert: “Hawaiian Chocolate-Malted Ganache and a bon bon plate with house made cotton candy.” 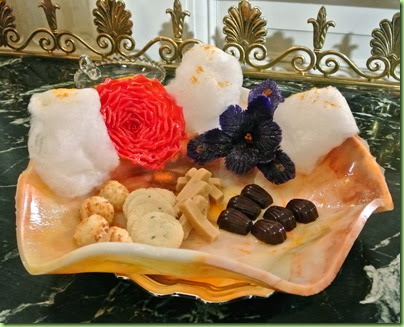 Wait a minute: “cotton” candy, and chocolate bon bons? Isn’t that a little…racist?

And not that anyone cares, butt if past experience is at all indicative of future performance, this little affaire de France cost us a cool half a million dollars. And not even any dancing!

MY EYES!!!!!!! I stumbled across a pic of moochelle somewhere on line this morning and was praying no one would actually post it anywhere on FR. Thanks a lot NOBO2012. LOL! And the “dress” reportedly was a $12,000 creation. OMG. That thing was hideous. The dress too.

Don’t worry their dogs lick the plates when their done!

Homeless? What homeless? The homeless haven’t been seen since the “lyin’ king” took office. They will suddenly reappear in the next POTUS election without a doubt. (There seems to be no shortage of them in Reno)

The term “homeless” was removed from the MSM lexicon in mid Jan 2009. It will not return until a Republican holds the WH.

My thought too. I’m surprised Carolina Herrera was in the tent and awning business. There’s a place in WV called Panther Primitives that might be able to to a better job.

After the ball did they put the blue curtains back up in the white hut? These marxists are insufferable.

think that dress is the prettiest one she has worn, but no First Lady pays for those gowns full price if at all. For many designers getting their name out there is worth the cost of the dress. If I remember correctly, that bit of info. came out during the Kennedy adm...for first lady Jackie....

The skirt on that dress looks exactly like my bird cage's cover.

That dress does not look good on her, the skirt is way too full for her build. Someone here last night posted a picture of the back, it is horrible. It almost looked like those bustles women used to wear back in the old days to make their butt look bigger.

I’m glad it wasn’t windy, that weave doesn’t even look attached to her head.