Transatomic Power (TAP) is developing an advanced molten salt reactor that generates clean, passively safe, proliferation-resistant, and low-cost nuclear power. This reactor can consume the spent nuclear fuel (SNF) generated by commercial light water reactors or use freshly mined uranium at enrichment levels as low as 1.8% U-235. It achieves actinide burnups as high as 96%, and can generate up to 75 times more electricity per ton of mined uranium than a light-water reactor.

Transatomic Power has greatly improved the molten salt concept, while retaining its significant safety benefits. The main technical change we make is to change the moderator and fuel salt used in previous molten salt reactors to a zirconium hydride moderator, with a LiF-based fuel salt. During operation the fuel in the salt is primarily uranium. Together, these components generate a neutron spectrum that allows the reactor to run using fresh uranium fuel with enrichment levels as low as 1.8% U-235, or using the entire actinide component of spent nuclear fuel (SNF). Previous molten salt reactors such as the ORNL Molten Salt Reactor Experiment (MSRE) relied on high-enriched uranium, with 33% U-235. Enrichments that high would raise proliferation concerns if used in commercial nuclear power plants.

Transatomic Power’s design also enables extremely high burnups – up to 96% – over long time periods. The reactor can therefore run for decades and slowly consume both the actinide waste in its initial fuel load and the actinides that are continuously generated from power operation. Furthermore, our neutron spectrum remains primarily in the thermal range used by existing commercial reactors. We therefore avoid the more severe radiation damage effects faced by fast reactors, as thermal neutrons do comparatively less damage to structural materials. 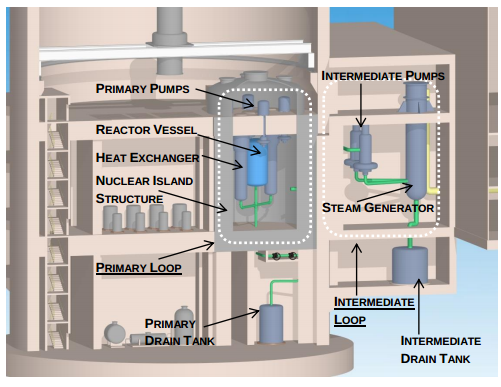 A key difference between Transatomic Power’s reactor and other molten salt reactors is its zirconium hydride moderator, which we use instead of a conventional graphite moderator. Zirconium is a metal with a low absorption of neutrons and high resistance to radiation damage. Hydrogen is a highly effective moderator. The reactor core contains zirconium hydride rods. These rods are surrounded by cladding to extend the life of the moderator in the corrosive molten salt. 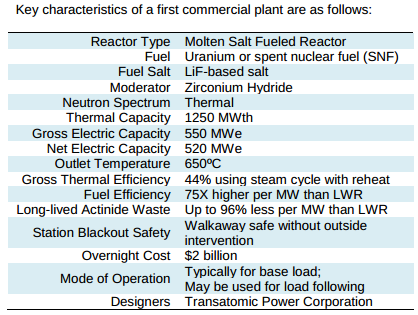 There are three factors driving this higher electricity output: lower enrichment, higher burn-up, and better conversion of heat to electricity:

Lower Enrichment: One ton of natural uranium ore yields 88 kilograms of LWR fuel enriched to 5%. However, it yields 274 kilograms if only enriched to 1.8%. This is a factor of 3.1X more starting fuel mass for the TAP reactor.

Higher Burn-up: At 5% enrichment, light water reactors have improved their burnups from 30 Gigawatt-days per metric ton of heavy metal (GWd per MTHM), and are quickly approaching burnups as high as 45 GWd per MTHM. In contrast, the TAP reactor can achieve up to 96% burnup at 1.8% enrichment —the equivalent of 870 GWd per MHTM out of a theoretical maximum of 909 GWd per MHTM. This is a factor of 19.2X more thermal energy for the TAP reactor.

According to sources cited by the World Nuclear Association, proven world reserves of uranium are estimated to be 5.3 million metric tons if the market price were $130 per kilogram (current prices are about $80-110 per kilogram – at a higher price more mines are viable) and 7.1 million metric tons if the price increases to $260 per kilogram. Using light-water reactors, WNA calculates these reserves are enough “for about 80 years” especially given expected increases in energy use.

This limitation is currently not a serious problem, because it is likely that reserves could be extended by a factor of 2 or more through additional exploration. However, nuclear power’s generation share is currently only 12% of global generation. If this were to increase because of rapid energy demand of if countries turn away from fossil fuels, the relatively low burnup of light-water reactors may become an issue.

By comparison, the TAP reactor can use current known uranium reserves to supply fully 100% of the world’s electricity needs for about 4,000 years.

Techniques now under research for collecting uranium from seawater are estimated to become economically viable once uranium reaches a price of about $300 per kilogram. The TAP reactor generates enough electricity per kilogram of fuel that it remains commercially viable even at this price.

Compared to a similarly-sized light-water reactor, the annual waste stream is reduced from 10 to 0.5 metric tons – which is 95% less waste. Furthermore, the vast majority of our waste stream – the lanthanides, krypton, xenon, tritiated water vapor, noble metals, and semi-noble metals – has a relatively short half-life decay, on the order of a few hundred years or less. We believe mankind can tractably store waste materials on these timescales, compared to the hundreds of thousands of years required for waste from LWRs.

The basic TAP reactor design described in this report will benefit from future innovations in a number of different ways. Improvements to complementary technology will become commercially available over time. These technologies include high temperature ceramics such as SiC-SiC composites for heat exchangers and other reactor internals, which will allow us to increase the reactor’s operating temperature and increase thermal efficiency. The helium sparging in the primary loop off-gas system may be replaced by more advanced cryogenic removal methods. Furthermore, we will likely be able to incorporate closed loop Brayton cycles or open loop air turbine cycles in the future.

Obama will quash this fast.

The only electrical generation the progressives want is generated by unicorn milk.

The environmentalist whackos have stymied the development of new reactor technology for decades and have kept obsolete and potentially hazardous designs like those a Fukushima operating long after they should have been replaced with better technology. Nuclear power is safe and produces no of those supposed green house gasses, but the environmentalists keep pushing for windmills and solar power that could never produce enough reliable power to meet even a fraction of our needs.

since it’s written it must be true

I prefer Yeti milk ice cream, but to each his own...

peta would object to this.

There is no excuse for any new design to not be “walkaway safe”, so in the event of total loss of cooling power like at Fukushima, the reactor stays within the safe and stable portion of its operating envelope.

The company I work for actually built a salt-cooled reactor as an experiment back in the ‘60s. It’s still there, near Winslow, Arkansas. It only ran once, just to see what would happen; then they shut it down, foisted it off on the University of Arkansas, and washed their hands of the whole matter!
Before she was tossed out on her fat a** by the voters of my fair state, our (thankfully) former U.S. Senator Blanche (Blank) Lincoln managed to secure some federal dollars for the site to be cleaned up.

Very interesting development. This deserves some more reading. The developing company certainly has patents, and
China, the world’s largest manufacturing country, largest manufacturer and consumer of automobiles, and facing well known air pollution problems, would be the most likely market. They have the market and the money, and don’t have a million or so making a good living disrupting energy production as we do here in the U.S.

This issue, in this writer’s opinion, has always been the key to understanding the current administration. Many of the key players in the Obama administration have made careers of obstruction, and always been honest about it, depending upon the ignorance of the public to insure that the obstruction business remains profitable - environmentalism, global warming, global change, enhancing dependence upon foreign energy sources (Keystone, drilling restrictions, emphasis upon nonsense like solar electric and wind generation.

John Holdren, thirty five years a Marxist, committed to reducing population by any means necessary, as Presidential Science Advisor, and now on the new NSA oversight panel, is but one key example, supported by Theresa Kerry’s father’s money for several decades. These people never did anything but obstruct development, which is the key to their motivation - right out of Atlas Shrugged!

They haven’t the character or talent to be developers, but as community organizers, have focused their lives on becoming the administrators of other people’s lives. Making more dependent upon a growing government is job security and, while misguided, many of them have become very skilled. China will have no use for those skills, and when China’s air is cleaned up, many of our skilled developers will move to China where their industry and talents will be appreciated and rewarded, unless, of course, some of our formerly sovereign states become independent, rather than be robbed of their productivity to support the government dependents who are now a majority of our nation’s economic base, and to support military actions in support of the Muslim Brotherhood, costing the lives of many patriots as well as the livelihood of what remains of those in the private sector.

Yeti milk... I was raised on the stuff!

14 posted on 02/08/2014 6:08:27 PM PST by Rodamala
[ Post Reply | Private Reply | To 7 | View Replies]
To: The Great RJ
There is next-generation nuclear reactors, the size of a 5 x 7 prison cell, that can be conveniently stored underground and power entire villages or towns.

This technology is real, it works and it is quite safe....amazingly safe when compared to conventional
reactors. It’s not new tech, we’ve known about this
type of reactor for decades. However nobody wanted
to be bothered to perfect and scale up the technology
as Uncle Sam had already done and paid for that to
happen with the conventional reactors currently in use.


The current designs were created because they produce
fuel that can be turned into bombs. The molten salt
reactors do not. That is a major factor in why one
design was chosen over the other.

Transatomic has been talking about doing lftr thorium reactor for two years or more. But as far as I can tell they have not done anything yet. I think for lack of funding. Another lftr thorium company Flibe has been talking about doing a lftr thrium reactor for 3-4 years. They also have done nothing—as well, I think for lack of funding. Bill Gates’ company Terrapower has a different design that they have so far done nothing but model in computers. Their design may be too cumbersome. Last year they also began looking into lftr thorium reactors. As far as I know, so far no actual construction has begun in any of these projects. For lack of funding.

So was I. But in spite of all my expeditions in the mountains I could never find Mom.