Yes, I stayed up late and watched the 56th Annual Grammy Awards so you didn’t have to. You’re welcome. I felt that watching the annual freak show would be good conditioning for tomorrow’s State Of The Union (SOTU). I was not wrong…about the freak show anyway.

Before I begin, I’d like to acknowledge the prescience of the Buggles who accurately predicted the migration of the music industry from being about the “song” to being about the “performance” back in 1978 with their hit “Video killed the radio star.” To this day, their jingle-tune is best remembered as the video that launched the nascent MTV network.

So, in honor of the totally transformed music industry, allow me to present the highlights from last night’s self-serving honors program. We begin with Beyoncé's behind: 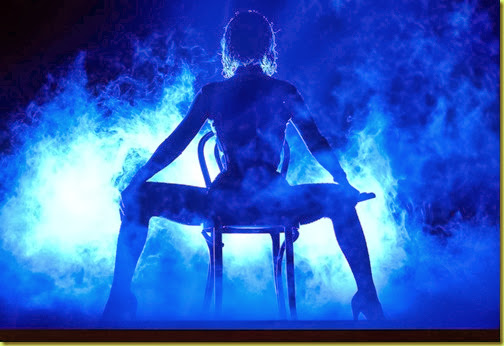 Right out of the box, Beyoncé owned the night. After a solo, sexed up version of Flashdance she and Jay Z 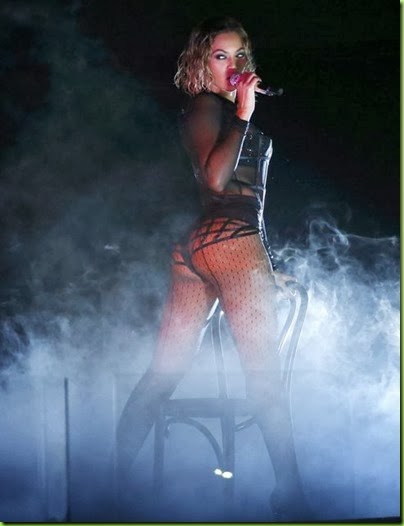 Getting ready to twerk for the money

twerked to their hit, Drunk in Love (expletives deleted). Bey – the woman Lady M considers a great role model for her girls – began by singing - well, “grinding” might be more accurate - in some sort of a black cage that also served as a costume. Here it is in motion:

Yeah, no. The entire act was even more disturbing than the gif, butt that’s the point: music as art, art as music and art isn’t art at all if if doesn’t offend somebody. What is it they call that kind of art again? Oh, right; pornography.

Someday Baby Blue Ivy will be so proud. As for Lady M and that role model thing, I don’t know. I’m pretty sure Mommy doesn’t want Malia and Sasha to be sluts and whores, so maybe it was just her way of crediting Bey with providing the second time in her adult life that she was proud of her country.

Butt that was just the beginning. The award show originally dedicated to musical recording artists proceeded as more of a nod to the visual arts than the audial ones. Take Pink’s bizarre act which was a cross between the flying Mirandas and Cirque de Soleil: more acrobatics (she’s flexible butt mediocre) than singing. Let’s face it, even lip syncing while hanging upside down doesn’t sound or look natural. 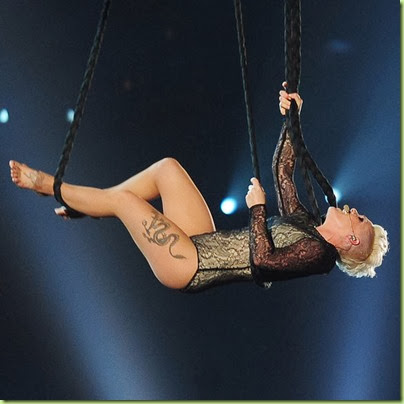 Although I do admire her flexibility and strength: maybe she should just can the singing career and go for Olympic endorsements. 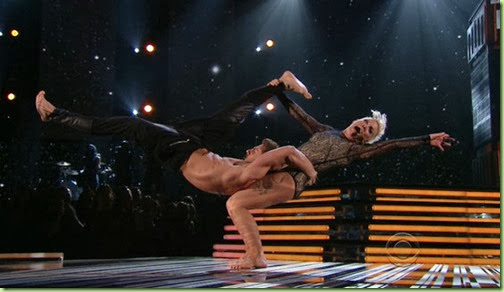 And then there was “Pharrell” who you knew was going to win everything because he kept popping up all night long with nearly anyone who performed. Apparently it’s “black tie optional” at the Grammys these days: Pharrell wore red leather and a really, really big hat: 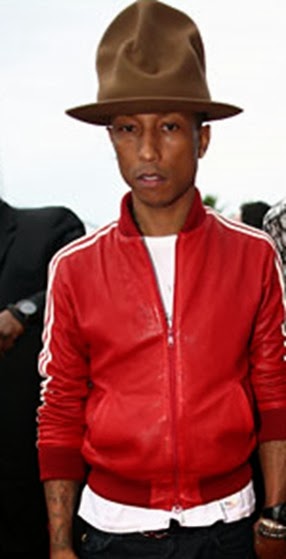 Pharrell, who is a singer and a producer, performed with his robots (just like BO will tomorrow): 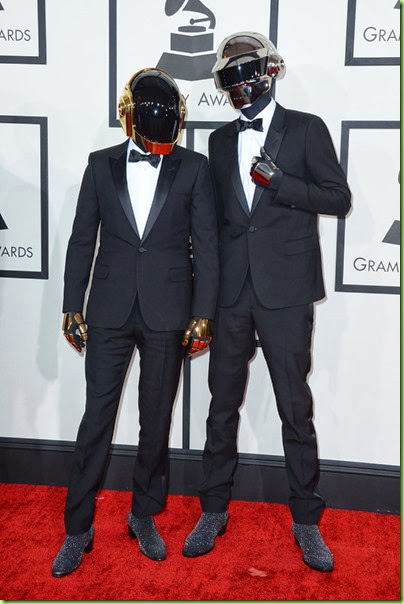 And of course, the material girl was there: Madonna practically invented the modern musical version of sex as performance art. She came with her son. As if that poseur wasn’t bad enough, Madge later changed into a wedding white Ralph Lauren tuxedo to serenade the 33 newly married (by Queen Latifa!) couples (gay AND straight, because we’re not bigots) with her classic "Open Your Heart." Her act followed the performance of rap duo Macklemore & Lewis singing their gay marriage anthem "Same Love." Yeah! 33 couples hitched, right there at the 56th Grammy Awards! Now that’s music! 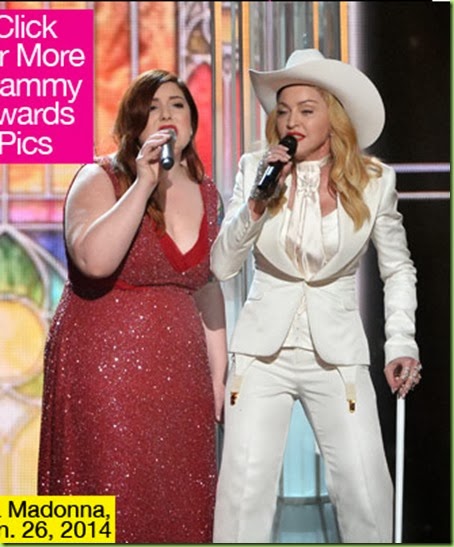 Is it just me or does anyone else think Madonna is beginning to look like Marlena Dietrich?

And I almost forgot! This is huge: Sir Pall McCartney actually performed, on stage, with Ringo! Starr! It was the First Beatle Reunion- evah! Unfortunately there are only two of the Beatles left. 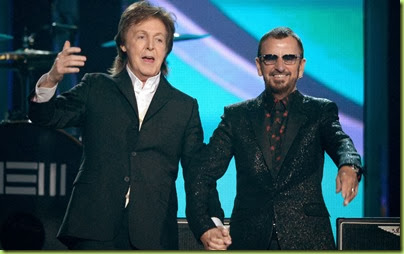 Although Jon’s son, Sean, could have sat in for his dad: 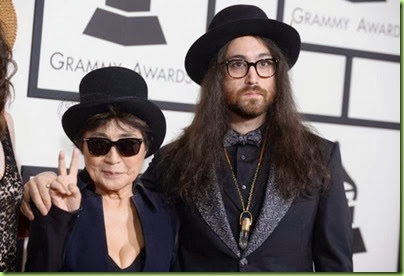 What was especially cool about the reunion was that after their respective White House visits, everyone decided to give peace a chance: after 30 years of feuding, Paul and Ringo have buried the hatchet and forgiven Yoko Ono (so maybe it will work in the Middle East after all!) And you can tell this made Yoko very happy as she was groovin’ to the ex-Beatles music. Although, I swear, as I watched her, Yoko looked for all the world like the fake signer at Big Guy’s speech at Mandela’s funeral. What do you think? 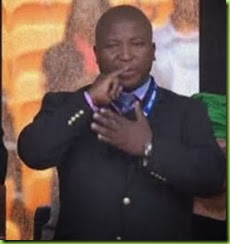 Butt I nearly forgot the very best part of the show! In a homage to Lady M, Ryan Lewis (of the rap duo Macklemore and Lewis, above) wore a nearly identical outfit to the smashing one MO sported at the Nickelodeon People’s Choice awards last year! How incredibly cool is that? 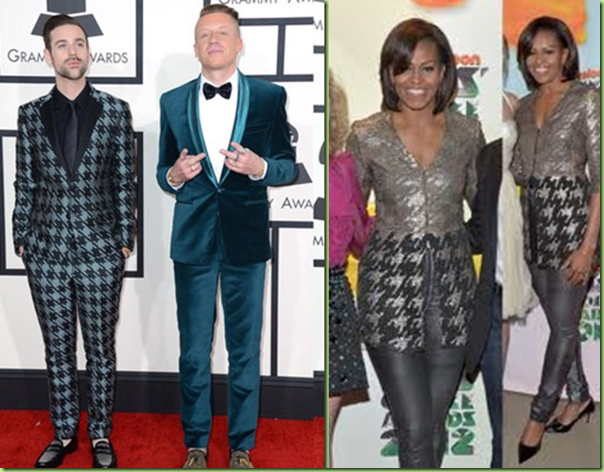 Okay, I think I’m in shape for the SOTU tomorrow. I’m renaming it the “Teleprompters Killed the Orator Guy”

NOTE: For more on this topic be certain to read Mark Steyn’s vintage essay, Twenty Years Ago Today in which he shares his, and Harold Bloom’s, take on “popular culture.”

“What happens when, instead of beautiful men making beautiful statues, angry men make angry songs? “Keepin’ it real,” in the current black vernacular, means the rapper Nelly making a video in which he swipes a credit card through his ho’s butt. “Keepin’ it real” means songs in which men are “angry” (as John Kerry says) and violent and nihilistic, and women are “sluts, bobbing chicken heads, and of course bitches.” “Authenticity” is surely a more reductive view of the black experience than your average nineteenth-century minstrel show ever attempted. I think we can guess how Nat “King” Cole would have felt about gangsta rap.”

ANSWER TO TITLE CLIFF HANGER: Teleprompters killed…who? Or, more accurately, what? Great communicators: they communicate from the heart, not the scrolling page. 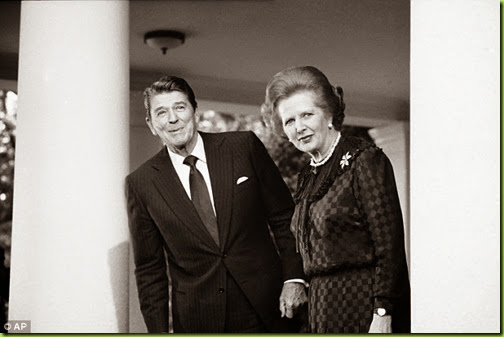 Keep in mind that your parents thought you were going to Hell because of elvis shaking his hips. It is all relative. I can only imagine what the youngsters today will be complaining about 30 years from now. It is funny how people have said on other threads that they have not watched in over 30 years....well you are too old to be watching the Grammy’s anyway. Stay with your Lawrence Welk show. I didn’t watch either and I am 44...why too old to be paying attention to this type of show. Let the youngins enjoy their show.

3 posted on 01/27/2014 10:42:19 AM PST by bmwcyle (People who do not study history are destine to believe really ignorant statements.)
[ Post Reply | Private Reply | To 1 | View Replies]
To: NOBO2012
With the exception of a few, it's all glorified karaoke. Flash and pizzaz to cover for what is just plain old puppeteering. Mater of fact they should use real puppets, play the record and have the puppet lip synch to it, it would be more interesting.

4 posted on 01/27/2014 10:42:26 AM PST by GrandJediMasterYoda (Hitlery: Incarnation of evil.)
[ Post Reply | Private Reply | To 1 | View Replies]
To: napscoordinator
Keep in mind that your parents thought you were going to Hell because of elvis shaking his hips

No comparison, not even close.

Then it ain't a reunion. Ringo has played with Paul many times since the Beatles broke up.

So. All just very sick and totally disconnected from Americans that actually fuel this country and try to propel it to a solvent future.

But Drama wasn’t a half bad album.

rationalizing the truth away.

I could only watch 15 minutes of that crap. Last year’s Grammys gave me more hope...

agreed.. Drama was not half bad.. not great but it had some good moments.

I think it was some of Steve Howe’s best guitar work. Tempus Fugit is one of my all-time favorite Yes songs.

“Keep in mind that your parents thought you were going to Hell because of elvis shaking his hips.”

I think that’s quite exaggerated, a type of historical urban legend.

Still, to the extent there is truth in it, it is clear now, more than 50 years later, that they were right!

You must be young.

Then he turned and walked away. Better living through chemicals?

If you like Jon Anderson, let me share with you one of my favorite Sola Jon efforts; Olias of Sunhillow, from about 1978. Very spacey, esoteric, something The Hobbits would sing during a gathering, if you will. My favorite three cuts are rather short, but I have never forgotten them. They are #1. Meeting (Garden of Geda), sort of a Gregorian chant with synthesizer and islander’s percussion. #2. Ocean; A very spare, elegant weaving melody, with lots of whole notes, leaves you satisfactorily transported. #3. Dance of Raynart; The first moments after a summer rain, ground still steaming, you hear harp string glissandos and clarinettes. Try it, you’ll like it!

If that happened, (Ozzy forgetting the name Beatles) he probably did it on purpose, a little passive aggression defiance. Maybe Ozzy is just a little tired of playing Homage to the distant past, when it doesn’t include him or his genre. I love many things about The Beatles together and apart, but I’m of that generation. Aren’t people of today who are say, under 40, tired of hearing us rave about our music heroes, or has no one truly replaced them in the long run. While growing up in 1960’s, I don’t remember hearing so much play of 1940’s music.