The country’s former newspaper of record, the New York Times, saw a big blip in their circulation yesterday when it ran with an above the fold story about Lady M’s half-century mark: 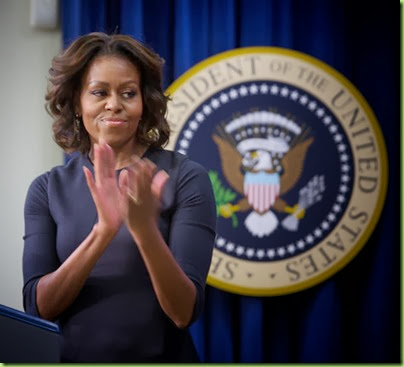 On Saturday night, Mrs. Obama will celebrate her 50th birthday (which falls on Friday) with dancing and sweets throughout the state floor of the White House, drawing the nation’s attention away from her husband, at least for an evening. Guests will sip fine American wines, consume delicate macarons and be entertained — the expectation is by Beyoncé.

It was a wonderful, humanizing piece:

She has perfected a mean forehand, is working on her yoga poses, dishes with girlfriends over brussels sprouts and dirty martinis (one olive)… Michelle Obama is in many ways the embodiment of the contemporary, urban, well-heeled middle-aged American woman. She likes to take “me time,”

explaining how she’s cobbled together an ordinary life for herself by doing ordinary things like shopping incognito at Target and going to the girls soccer games to chide fathers for not bringing an adequate supply of water to keep their wee ones properly hydrated.

Mrs. Obama lightheartedly chided him. “She said, ‘What kind of water bottle is that?’” 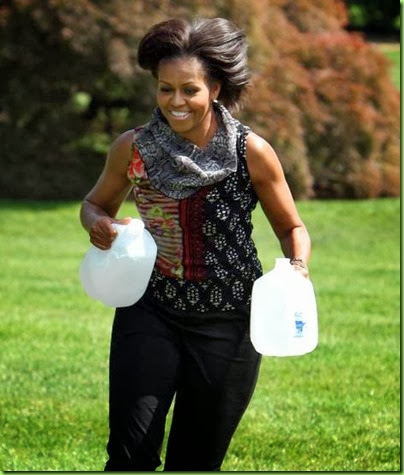 MO to the hydration rescue: You need much bigger jugs

This of course is not the kind of news that once constituted the New York Times lead story. It would seem that the old gray lady (the NYT, not MO) has turned into something of a ratings whore. Not unlike MO’s husband.

Yesterday Big Guy took to the stage again to explain his evolving position on the NSA spying on Americans. You may recall that he was against it before he was for it, as he explains here, in 2008, while running for his first historic presidency:

“I will provide our intelligence and law enforcement agencies with the tools they need to track and take out the terrorists without undermining our Constitution and our freedom.”

“That means no more illegal wiretapping of American citizens. No more national security letters to spy on citizens who are not suspected of a crime. No more tracking citizens who do nothing more than protest a misguided war. No more ignoring the law when it is inconvenient. That is not who we are.”

“No more ignoring the law when it is inconvenient. That is not who we are.” !?!

Let the record reflect that - as it turns out - that’s precisely who the Won-We’ve-Been-Waiting-For is. With pen and iPhone we not only ignore inconvenient laws, we now change them on a whim too. Butt that’s another story.

Getting back to BO’s much anticipated NSA speech on warrantless wiretapping: he threaded the needle so well that it’s unclear now whether he’s for it or against it. Or, as Ed Henry put it “ he stressed he’s heard all sides of the debate before deciding he’s not ready to decide.”

As usual, in trying to please everybody, he pleased nobody.

Not that the reviews were all negative; Charles Krauthammer called it “the best use of Obamas’s rhetorical powers of dazzling with very little content since the ‘08 campaign.” Saying that the well crafted speech was “90% smoke and mirrors.” (I disavow any participation in this old trick: as you know I’ve been at Sundance.)

Butt back to the NSA speech for just a minute. Everyone from Rand Paul:

"I think what I heard is that if you like your privacy you can keep it," Paul zinged on CNN following the president's address. Going after the president's reference to the Revolutionary War, he poked further: "Paul Revere was warning us that the British were coming, not that the Americans were coming."

to the New York Times:

In overhauling the nation’s spy programs, President Obama vowed on Friday that he “will end” the bulk telephone data program that has caused so much consternation — “as it currently exists.”

The caveat is important. Although Mr. Obama imposed some new conditions on the program, the National Security Agency, for the time being at least, will continue to maintain and tap into its vast catalog of telephone data of tens of millions of Americans until someone can think of another way to do the same thing.

seems to feel that Big Guy didn’t really say much of anything. I think everyone overlooked the most critical line in the speech however:

“the challenge is getting all the details right and that is not simple.”

At first I was HOPE-full, thinking that Big Guy had finally learned something from the whole Obamacare implementation fiasco. Butt in the next breath, he punted the details off to others, so I guess not.

Got to run: Have to hitch my ride back to D.C. from Sundance and make sure my batteries are completely recharged for tonight’s big “Sips and Chips with Obama’s Cripps” birthday party. Because as you may recall from our last inaugural after-party at the Big White, anything can happen. And it’s my job to make sure you only see what’s fit to print. 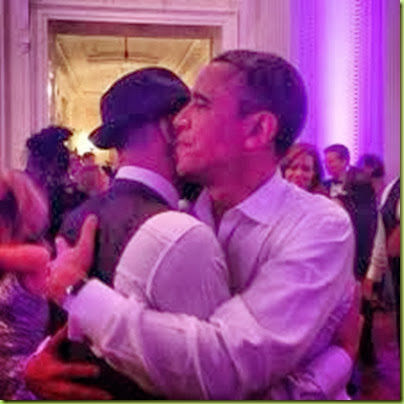 “President Obama (photographed hugging a guest at the party)and his wife Michelle hosted an extremely private star-studded after-party at the White House after the Inaugural.” (Photo: IBTimes)

After all, somebody has to do the job that the New York Times will no longer do.

Picture of Mooooooochelle carrying water jugs for odumbo, just like the news media. Now the devil is in the white house.... 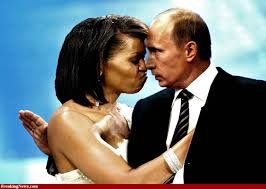