It’s really a shame Big Guy didn’t get the chance to enjoy the same kind of photo op with Nelson Mandela that Bubba did. 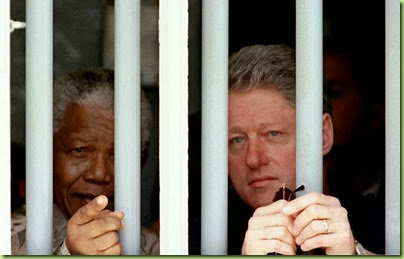 Looking reflectively pensive is just not the same when you’re alone in the cell. 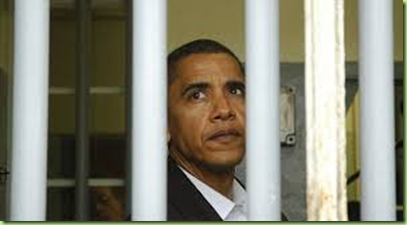 Looks good though, no?

And if Barry had actually had a chance to spend some quality time with “Madiba” perhaps he could have taught him the same thing he taught Bubba: how to forgive people for telling the truth about the lies you told:

It must be something you learn at President School: how to make every major world event about you. Because left to my own devices, I never would have been able to make the connection between a militant South African black man being left to break rocks in a hell-hole of a prison for 27 years, and the first black American President being impeached for lying to the Grand Jury about getting bjs in the Oval office. Only a world class fabulist/prevaricator like Bubba could do that.

Big Dawg sure has set a high bar for making this “all about you” though. Especially since the only opportunity BO ever had to meet Madiba in person was “in his first months as an Illinois senator. He met briefly with Mandela in his hotel room in a hurriedly arranged get-together for a senator already rising like a rocket.”

As a result, they never really had a chance to swap stories and experiences that could later be translated into life-changing insights. Like how smoking crack for 18 hours while cramming for finals is like cracking rocks all day for 27 long, hard years. 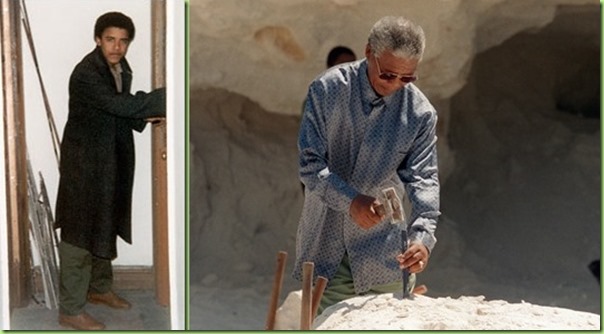 I’m not saying Nelson Mandela didn’t have a big impact on BO’s life. Indeed, the symbolism of President Mandela has not been lost on our President. 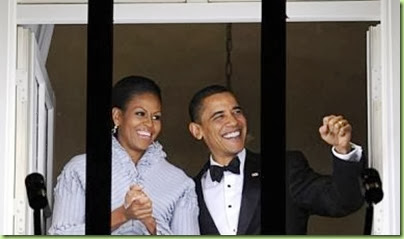 To be sure, the raised fist salute has long been the iconography of political struggle:

"It's a way of indicating that you intend to meet malevolent, massive institutional force with force of your own - you are an individual who feels bound with other individuals to fight an oppressive status quo." 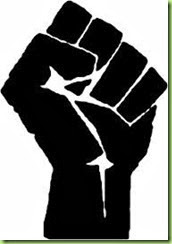 Granted, it has most frequently been embraced for extremist movements like Communism and militant black power and female-power activists.

As well as black American Presidents 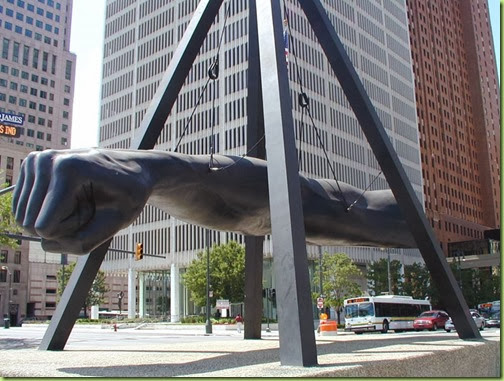 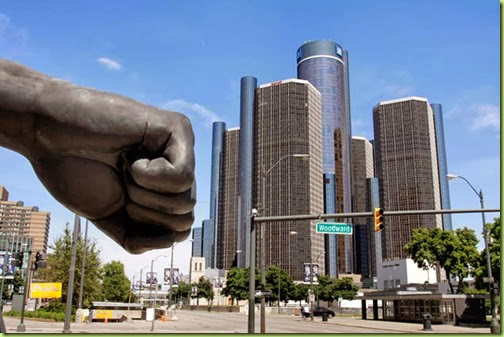 I think the message’s clear.

And speaking of messages, Bubba’s self-aggrandizing remarks actually included a deeper message, intended for the GOP. He was just reminding them that when he was President, he was a very big man; he forgave his adversaries for the good of the party and the stability of the Republic. His not so veiled threat is that they have no reason to assume that to be the case with Big Guy. So got that boys? “If you impeach this little pissant President, you will all pay the price; as will the rest of the country.”

So be vewy, vewy quiet. And consider this your last warning. 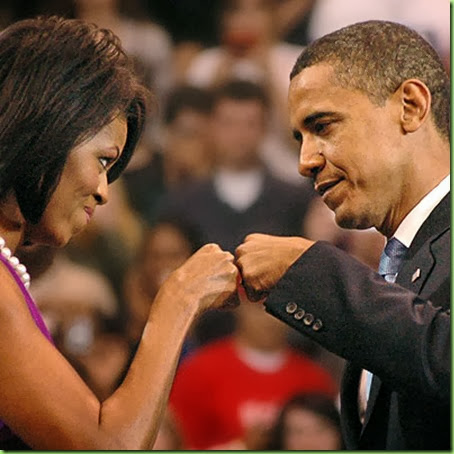 Oh, and while you’re at it, better pass that message on to all those damn Teahadists as well: 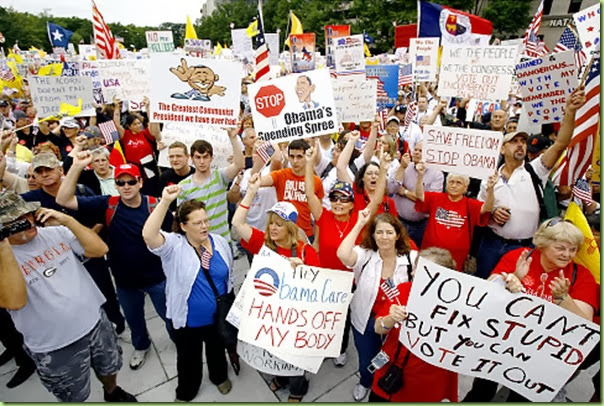 "It's a way of indicating that you intend to meet malevolent, massive institutional force with force of your own - you are an individual who feels bound with other individuals to fight an oppressive status quo."

P.S. That welt on Bubba’s forehead? Not the mark of the devil, he just got clipped with another flying ashtray.

Nelson Mandela’s funeral is a time for praying not preening

Barack and Michelle Obama, Bill and Hillary Clinton, George and Laura Bush will all figuratively wear a necklace at Nelson Mandela’s memorial tomorrow—the Winnie Mandela necklace that is the most grotesque one of all time.

The prime ministers of Canada and Britain, Stephen Harper and David Cameron will wear the necklace, too. But none of the world leaders at the Mandela funeral—Daily Mail touted as the biggest funeral in the world since Winston Churchill—will hear the screams of the young blacks who died in agony wearing the Winnie Mandela necklace.

Time and the politically correct era can never wash away the Crime of Humanity foisted on the blacks of South Africa when Communist African National Congress (ANC) ‘freedom fighters’ and ‘liberators’ sent hundreds to their death via the burning tire necklace.

The crime of the so many black brothers and sisters chosen for Death by Necklace? Suspicion of being “too friendly to whites”.

ANC members would take black people and hack off their hands or tie them behind the person’s back with barbed wire. Then a gasoline-filled tire would be set alight around the victim’s (“traitor’s”) neck and they would slowly and very painfully burn to death. (Wiki.answers.com).

Videos of Death by Necklace, not for the sensitive, still exist. One shown in the 1980s to Toronto Sun reporters witnessed the death of a young black woman, who even in the agony of her torture, was so modest she tried to control her billowing skirt, will never be forgotten by anyone who saw it.

It’s not as if western world leaders stampeding their sympathies at the Mandela memorial and state funeral can pretend they never knew.

Winnie Mandela, who will prominently attend funeral services of her late husband, was upfront about her belief in death by necklace.

“Winnie Mandela famously screamed to thousands at a large open-air rally in 1985/86: “with our matches and necklaces, we’ll liberate this country!”, implying that those who do not take ANC’s side will be burnt alive. Such threats by Winnie Mandela could very well be considered terrorism against the very people she claimed to intend liberating.” (Wiki.answers.com)

“Exiled members of the ANC were taught about necklacings and torture techniques at terror-training camps in places like Angola (e.g.. Camp Quatro) and Mozambique.

Nor can the Obamas, the Clintons, the Bush’s, the Camerons, the Harpers and all other Mandela funeral attendees pretend that necklacing is too far back for them to remember:

“The spectre of necklacing showed its ugly head again in 2008 when foreign blacks, mostly Somali, Zimbabwean and other refugees were being set alight by their brothers and sisters in what was called ‘the 2008 xenophobic attacks’. (VG.no May 25, 2010)

“Slogans such as “one rope, one sellout”, “one bullet, one white baby” and “kill the boer (white/farmer)” are still heard in SA today. In fact, a case of genocide has been made against 12 or 13 SA leaders, including the President (Jacob Zuma) and the ANC Youth League President, Julius Malema. According to the Rome Convention, incitement to commit genocide is also a punishable offence and the ANC has launched several appeals against court decisions that “kill the boer” is “hate speech” and “incitement to commit genocide”. The matter is being investigated by the ICC in The Hague. Shortly before the 2010 Soccer World Cup in South Africa, Winnie Mandela’s staff was in the news for threatening a gun-store owner, and saying: “July 12 all whites will be killed.”

Like a pack of braying donkeys, world leaders will gather in South Africa preening for the cameras that will send their pictures world-wide to celebrity watchers.

But phony braying, and crocodile tears notwithstanding, some still remember the bone-chilling screams of South African blacks burnt alive by the unspeakable evil of ANC necklacing.

Nelson Mandela’s funeral is a time for praying not preening.

Judi McLeod is an award-winning journalist with 30 years’ experience in the print media. A former Toronto Sun columnist, she also worked for the Kingston Whig Standard. Her work has appeared on Rush Limbaugh, Newsmax.com, Drudge Report, Foxnews.com, and Glenn Beck.

I thought that was Nassar in Egypt.

Yes, it is depressing, because there are so many LIVs that just love the guy and all he stands for. But the “clenched fist” is a good scope through which to view Obastard and all his works.

“Hellhole”? The photo I saw of Mandrake in ‘prison’ showed him seated on patio furniture around a swimming pool in the back yard of a private home where he was confined.
That’s pretty much the same treatment communists showed to prisoners in Cuba, Hanoi, Cambodia, Poland, etc., etc., etc.
Isn’t it?
Are the lefty worship services over yet, or do they have one more Black Mass?
td, that’s raciss!
I don’t care. 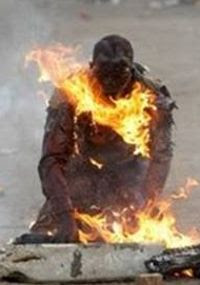