What’s this? Bad news on Wednesday? This stuff’s supposed to be held till late Friday afternoon.

Prospects of having the Obamacare website up and running by November 30: zilch, zero, nada.

Butt no problem: we’ve got the marketing campaign ramped-up for when it does work: it’s called “got insurance?” and it’s got it all. 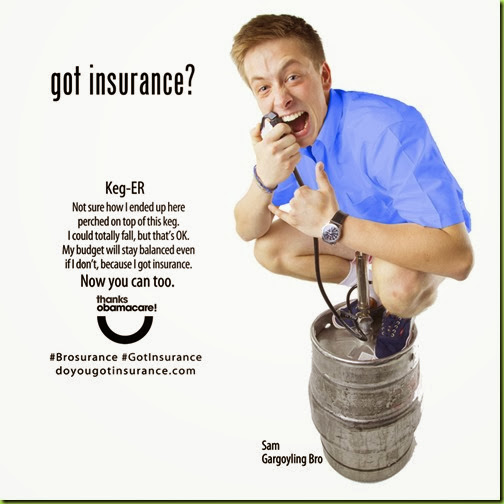 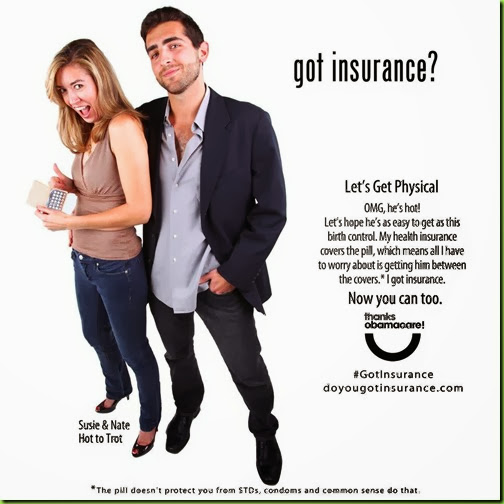 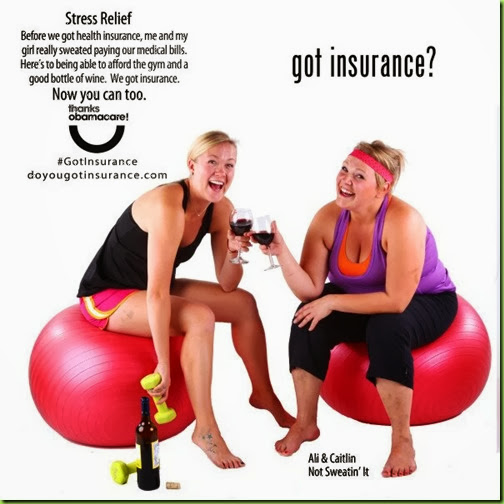 Drink up girls, it’s good for you.

Guess how many people  - who used to “got insurance” that they liked  - “not ‘got insurance’ today” because it was cancelled due to Obamacare? To date: 5 million;  forecast: 52 million before this national nightmare is over.

Which might explain our falling numbers in the Presidential popularity contest too. In a nutshell: “not good” and getting “not gooder” (that’s new postmodern-grammar, see above).

So here’s a bright spot amidst all this “not gooder” news: Lady M has taken on a new role: “Michelle Obama Edges Into a Policy Role on Higher Education” (h/t Arabella Trefoil).

Michelle Obama, after nearly five years of evangelizing exercise and good eating habits, will begin a new initiative on Tuesday that seeks to increase the number of low-income students who pursue a college degree. The goals of the program reflect the first lady’s own life and will immerse her more directly in her husband’s policies.

And we’ve got pictures! 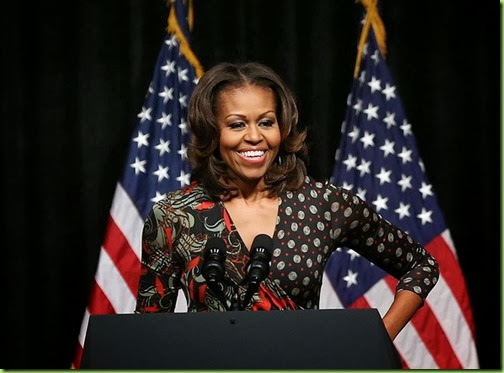 “Ok, Show of hands, how many recognize my frock?”

Many of Mrs. Obama’s supporters have been eager to see her use her résumé — before coming to Washington, she was an associate at the Sidley Austin law firm and a health care executive in Chicago — and her role as the first black first lady to expand her agenda. While she has also worked to help military families, her best-known initiative promotes healthy eating.

As I understand it, Lady M will be “expanding her agenda”  beyond No Child’s Fat Behind to focus on the value of higher education. She will place special emphasis on birth control (“Got Birth Control?”), 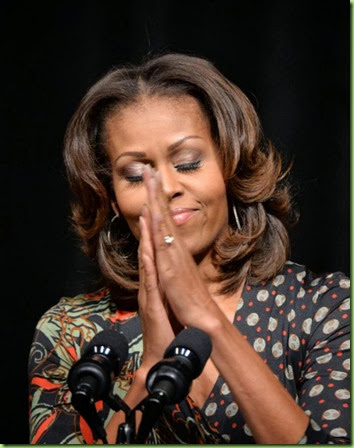 and the new common core grammar (“Got Grammar?”). 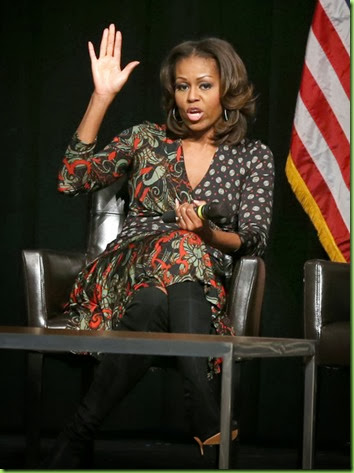 “So, like, I’m sure none of you guys ever recall me not using non-standard grammar or syntax, right?”

We’re not focusing on math because both Lady M and Big Guy managed to get through college and enjoy huge success without ever having to take a math class. And they don’t want your kids punished with a math class either: 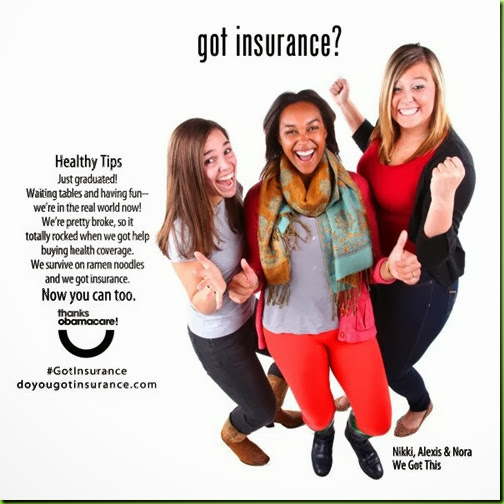 So they can spend $100,000 on a college degree in order to wait tables, ask if “you’d like fries with that order” or help us lower the unemployment rate and just stop looking for a job altogether. Then they can join the 92 million (and growing every month) Americans enjoying life outside the labor force. And get their free birth control from Obamacare too. THANKS, OBAMACARE! 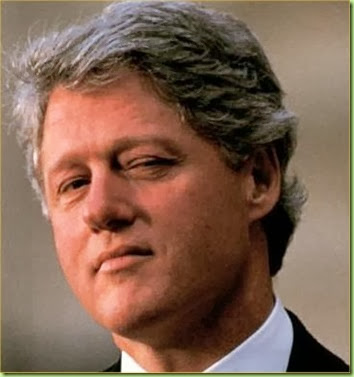 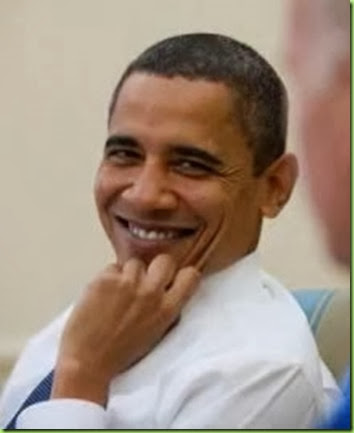 Hey Nate, ever dreamed you could be the President’s body man?

Every one of these ads reads like conservative satire. They even reference the mandate by it's conservative name: "thanks obamacare!"

The left has a truly horrible view of Americans. It holds out the lifestyle and morality of ghetto trash as being the model for the new generations of Americans.

Mmmmmm.....the thing about Boobamba is
that if he had another eye, he'd be a potato.

So I guess that makes Mrs Boobamba a yam----the popular
African Bitter Yam. Her orange makeup is a dead giveaway.

Are these ads for real?

I can't imagine they would induce anyone to sign up.

do these dumba$$es think this is actually going to work? A woman is going to sign up for a $300 a month health care plan so she can get free contraception?

Or a guy will because he sees a picture of a fag standing on a keg?

You’re thinking they were intended to be effective”. Actually, they were a mechanism for transferring ever more money to the Clown Prince nobama supporters who produced them That’s all.

The guy standing on the keg reminds me of one of the queens that appeared in that ‘Father’s Day’ ad from last year’s Gay-C Penney’s catalogs...

I've read that these ads have gone viral, and that the producers of them consider that to be a feather in their cap. Are these ads effective? Responsible? Who cares? Unlike private market ad campaigns, these government-subsidized ad campaigns have NO accountability. None. Zero. Zilch.

And that brings us to puerile, offensive, and ludicrous ad campaigns such as this. There is never any accountability.

Liberalism, in other words.

This is what our BILLIONS for education are producing?

It’s ebonics, silly. The new speech for the new people.

Growin’ up in south La. that talk has been around. Only we didn't call it ‘ebonics’... it was the speak of the uneducated, ignorant and lazy minds. Hard workers back then though. During my lifetime, they talk the same but refuse to work when we give’m Obamy phones and EBT’s.

Using ebonics for Fed Gov advertising is RACIST. And the masses still think conservatives want to ‘chain them up’. They accept this denegration directly from their masters.

15 posted on 11/13/2013 7:05:54 AM PST by apostoli (Time to thump the nose of the parrots.)
[ Post Reply | Private Reply | To 14 | View Replies]
To: NOBO2012
Many of Mrs. Obama’s supporters have been eager to see her use her résumé — before coming to Washington, she was an associate at the Sidley Austin law firm and a health care executive in Chicago ...I believe Moo - Chelle, after going through all that hard word at Harvard Law, later surrendered her license to practice.

And after leaving her health care executive position at the U of Chicago hopsital, the position was abolished (she was making mid-six figures...)...

Can no longer tell satire from reality.