Detroit held an election yesterday and as I advised MOTUS at the time, what difference, at this point, does it make? 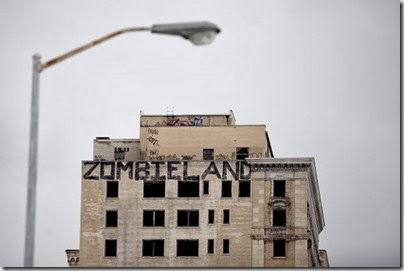 Zombieland Detroit: have at it

Both candidates appeared to be qualified and either one of them would have been more qualified to run for president than Barack Obama was in 2008 - aside from the perfectly creased pant legs that is. 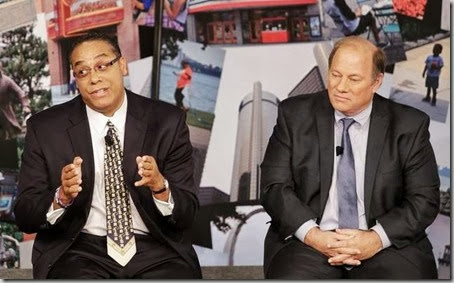 Since the Detroit Mayoral election is non-partisan, candidates are not listed by political party; there’s no need - there simply aren’t any Republicans here. This year the election came down to a choice between former Wayne County Sheriff Benny Napoleon (D) and former Wayne County Deputy Executive, Mike Duggan (D).

Like the 2008 presidential election, this race was historic. Mike Duggan, the white guy, won by a 10 point margin in a city that is currently 82% black. The last time a white man was elected Mayor of Detroit was 1969. Indeed, I think the last time a white man even ran for mayor was sometime in the 70’s.  So why, after electing black liberal Democrats to run their city for the last 40 years, did the citizens of Detroit elect a white man this year? Maybe they had grown weary over the course of  4 decades of seeing no results beyond a perpetual death spiral of rot, decay and unemployment combined with continually escalating taxes (property, sales/utility, income). Or maybe people have finally grown tired of  the Boss Hog mentality of City Hall. And perhaps even the black citizens are getting sick of hearing that every problem in Detroit is the fault of the racist suburbs.

I’d like to believe that’s at least partially it. The reality is more likely that Mike Duggan, despite being accused of being a  carpetbagger, was simply better than his opponent at co-opting the problems of Detroit’s citizens as his own and demonstrating appropriate empathy. He parlayed his public/semi-private experience into a resume of a “turnaround specialist” and promised to fix all of Detroit’s problems (with somebody else’s money, which is always compelling).

He’s an experienced, some would say quintessential, politician who knows every liberal Democratic trick in the playbook and brings the added benefit of knowing how to run the table on crony capitalism. And thanks to a series of plum political appointments to quasi-private positions following his tenure as Ed McNamara’s henchman, he can play that table from both sides. Unlike Obama he’s not the smartest guy in every room, but he’s smart enough. And ambitious. And tenacious; he earned his designation as McNamara’s bulldog.

While Duggan is a charter member of the “say anything” school of Democratic prevaricators, I suppose Detroit could do worse. In fact, we have: 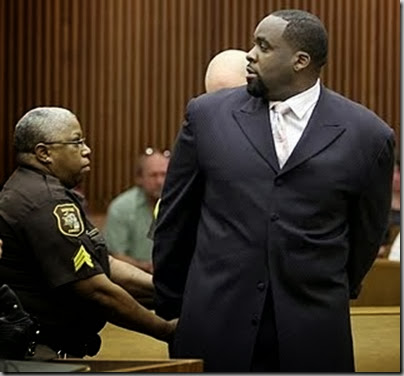 Kwame, our Hip-hop Mayor, gets ‘cuffed following his conviction.

So I’m  suggesting that, just like white guilt was partially credited for Barack Obama winning his historic 2008 election, black guilt (see Kwame, above) could be partially credited with Mike Duggan winning his historic election. The city’s citizens finally realized that the giant sucking sound they’ve been hearing all these years was the whoosh of the tide that was supposed to be rising and lifting all boats; only it was ebbing and swirling around the drain.  How could you not feel guilty when you find out you’ve been enabling that sort of thing?

I’ve chronicled the magnitude of the city’s problems many times in the past, but here is the Cliffs’ note version: 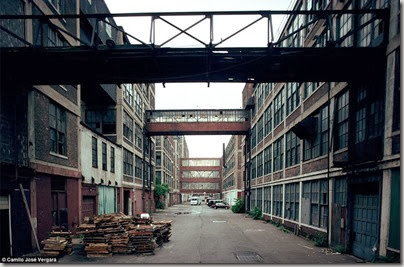 Both private and public infrastructure has been left to languish well beyond disrepair; much of it is now irreparable. 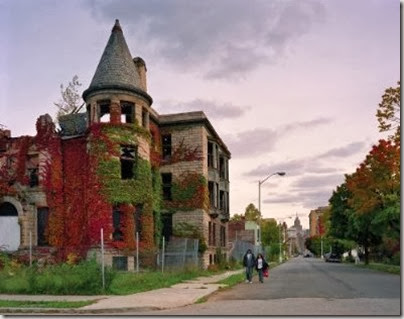 The city owned electric system has been falling apart for years, the streets are crumbling, along with the steam pipes under the streets. Libraries, factories, theatres, schools – all have been abandoned to the rot and  crumble of entropy on display. Vacant buildings that can’t even be given away multiply by a power of 10 faster than the city’s ability to demolish them. 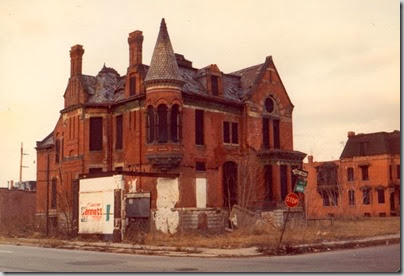 And then there is the Detroit Public School system: all but consumed by its bureaucracy, debt and corruption; it’s a microcosm of Detroit itself. The DPS is so buried in its own detritus that it has lost sight of its prime objective; to provide children with the tools and education required to become independent citizens able to survive, thrive and pass their knowledge on to the next generation. 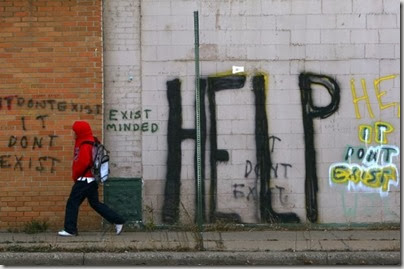 So, is Duggan the savior that Detroit desperately needs? Hardly, he’s just filling time while waiting to leapfrog into the Governor’s office. He might have stayed on at his $2 million job as CEO of the Detroit Medical Center (DMC) had he not gotten eased out after his chum, Governor Jennifer Granholm, former colleague and fellow McNamara protégé, was term limited out of office. And when she left so, too, did the state subsidies to the DMC. Subsidies gone, CEO gone as well. Coincidence? Probably not, that’s how crony capitalism works. Last I looked, Granholm was still looking for a new gig too, as Al Jazeera America wasn’t working out so well. 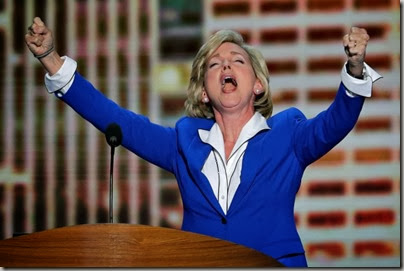 Definitely room for this talent somewhere in the DNC

Will Duggan be able to improve things in City Hall? Hell, a cockroach should be able to make things work better after the bankruptcy court clears the docket. The city is currently under the control of  Emergency Financial Manager (EMF) Kevyn Orr, and will continue to be so until such time as Detroit emerges from it’s bankruptcy in a year or so. When the bankruptcy is settled Detroit will be unshackled from a ton of bloated administrative overhead, bloated union contracts, unfunded union pension plans and billions of dollars of accumulated debt. Until then, the new mayor will be little more than a figurehead.  That gives Mike 2 years to get plans laid out and ground work laid for addressing the ongoing managerial problems in city management.

But if history is any gauge, and it usually is, Duggan will spend the time lining up allies, getting rid of enemies, signing corporations up for their annual donations to the “community chest” and aligning a whole raft of cronies who will prove valuable in the care and tending of the war chest for his next election – be it Mayor 2.0 or Governor 1.0.

Despite his lack of the perfect crease in his pant legs, the media by and large has given Duggan a pass on the baggage he brings to the Manoogian Mansion. His linchpin position in the McNamara machine is simply one of those inconvenient truths that must be ignored for the greater good: the advance of liberalism.

So, while I’m not a personal or political fan of “the Duggan’s,” I do wish him well, for the sake of the city. But I feel it only wise to keep my expectations low with respect to the turnaround of Detroit until I see a good reason not to.

Politics are an ugly thing, Democrat politics are uglier and Democratic policies in Detroit are uglier still. Would Benny Napoleon, the other liberal Democrat, have been a better choice?  Like I said before, what difference, at this point, does it make. 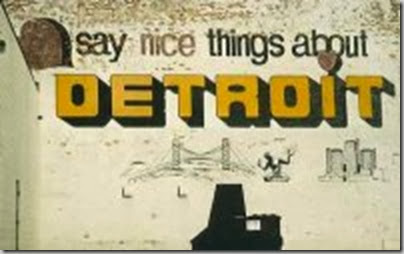 If you can think of anything.

Posted from: Dewey from Detroit

Detroit is a toilet.

What difference does it make?

It’s proof positive that even as the city crumbles around them. They continue to give power to the very people that caused it.

I expect to see this kind of stupidity in 2014 and 2016 as the sheeple elect rats and rinos again.

Good post. This is a perfect example of ‘average’ Detroiters - the copper theives. And THAT is why there is no hope for Detroit and eventually, our nation.

Being elected Mayor of Detroit is like re-arranging deck chairs on the Titanic. The depth of union crime and corruption isn’t even fully-known, yet. Lose-lose.

Bulldozer operators wanted. 2 or 3 should be enough.

Whatever his game is, Governor of Michigan is not in the cards. Outstate Ganders will NEVER elect a Mayor of Detroit to this office. Too much fear and mistrust. Likely he would want to speed up the conveyor belt shoveling even more of their money into the black hole.

All part of the game. What will the inner-city Democrats say when this guy fails?