Okay everybody: just sit down and shut up! We’ve got a Government to shut down here, and it WILL hurt! You! 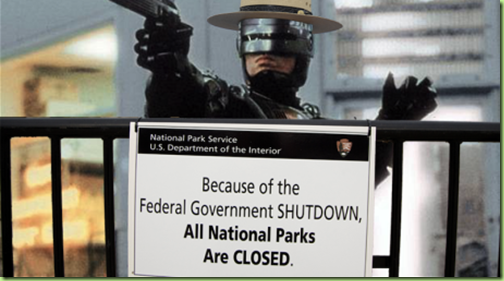 As you know, the Barrycades at the World War II Memorial went up immediately following the announcement of the the painful government shutdown. 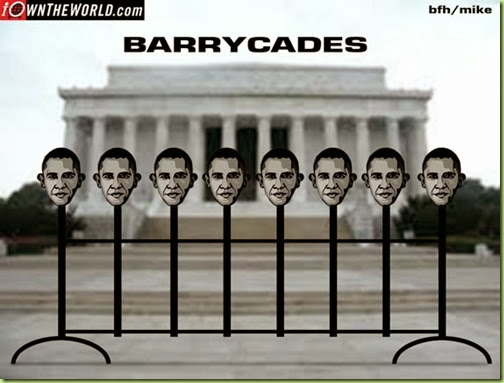 The stated reason for the closure was to ensure that none of our cherished WWII Veterans were endangered by government drones - now forced to fly unguided during this painful government shutdown.

You can tell that your government was really concerned about this potential hazard as War Memorials have never been closed during any of the 17 previous government shutdowns. And let me be perfectly clear: it required more effort to Barrycade the WWII Memorial than to leave it open.

Plus, the closure was part of a larger PR campaign pulled together by our Big Brains in preparation for the debt ceiling debate later this month. What if federal workers were to show up at the Barrycade to protest the government shutdown and demand that John Boehner tear down this wall? And just let them get back to their work for the American people. A brilliant plan, except that all the furloughed employees had already gone to play golf, so the SEIU had to hire McDonald’s employees to stand it for them at the protest.

On further consideration, the Big Brains relented. Having concluded that the staged optics of one group of federal government employees,

protesting the handiwork of another group of federal employees, 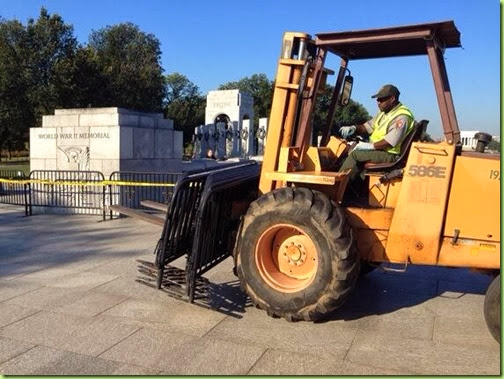 was trumped by the optics of members of the Greatest Generation in their wheelchairs being turned away at the Barrycade. 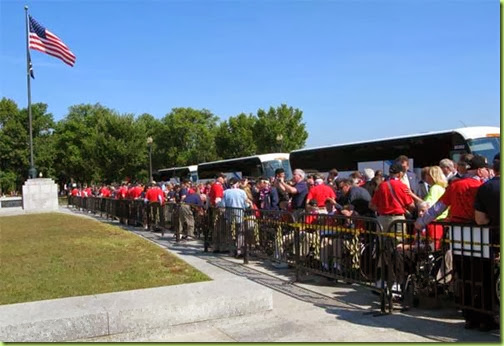 So it looks like we’ll just have to find some other way to exert the maximum amount of pain caused by the Tea Party Jihadists.

As might be expected, some of the Jihadists used this altogether reasonable safety precaution as an excuse to redirect people’s attention back to one of the phony scandals:

Meanwhile, BO exerted his outstanding leadership skills yesterday evening by calling the boys and girls to the Big White House to hammer things out. 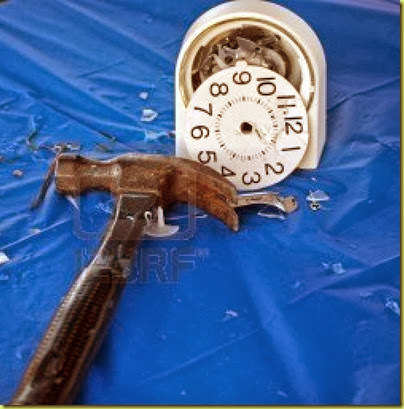 If you can’t fix things with a hammer, you’ve got an electrical problem. (h/t EVR)

It didn’t go well. Despite the fact that Harry “threw them a life line,” John said that “offering to negotiate after (they) got everything they want is not much of an offer.” Big Guy did his part; exerting the leadership skills he learned in Community Organizing school, he stood firm in his refusal to negotiate with domestic terrorists.

So, it looks like we’ll just sit back and wait for the inevitable stock market collapse caused by the anxiety surrounding the continuing government closedown and potential U.S. credit default. That should prove to be a winning hand in the upcoming debt ceiling negotiations with the arsonists and hostage takers.

Clearly, Big Guy has bent over backwards to work with these American Anarchists and they won’t budge. Butt don’t worry, we’ve got a solid game plan for dealing with them in the future. 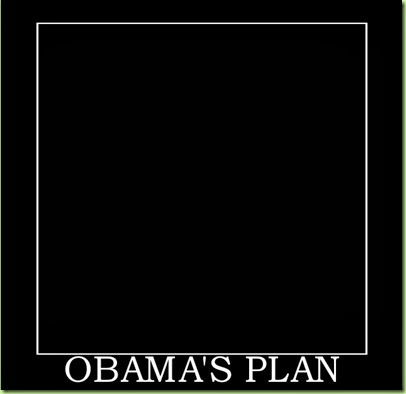 SPECIAL NOTE OF THANKS:

I would like to thank everybody who voted for me in Big Fur Hat’s “Favorite Blog” award contest preliminary round! (And a special shout out to Bijou, for bringing it to our attention.) You guy’s blew the competition to smithereens (can I say that?)!!!

There’s one more preliminary round going on today, butt I’ve already made it to the finals thanks to all of you!

The competition so far is stiff and awesome and as they say, it’s an honor just being nominated:

Canada Free Press??? SooperMexican??? Hey, I love CFP and SM, butt can we vote for Canadians and Mexicans in America now??? What next, Russians??? I guess Chicago Rules are in effect after all. Who knew?

Anyhoo, I’ll let you know when the final rounds begin, butt another of my beautiful nieces is getting hitched Friday and I’ve got more family obligations beginning today, so if any of you get wind of the finals before I do, please spread the word.

Bring on the final round competition!!!

Made me laugh out loud... I like spelling things out old school style

Those Barrycades wouldn’t last 10 seconds if I was there. Only the Clown is wussier than that POS fencing. Massive civil disobedience is the way forward.