Why was Big Guy on Jay Leno’s show last night?

Because he had important issues he wished to discuss with world leaders and the American people.

First, for Vladimir Putin, BO wanted to let him know that he’s “disappointed” with him for granting Edward Snowden asylum.

"There have been times where they slip back into Cold War thinking and a Cold War mentality. What I continually say to them and to President [Vladimir] Putin, 'That's the past. We've got to think about the future.'" 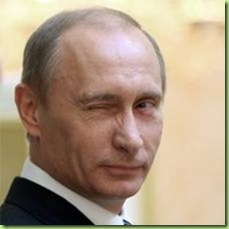 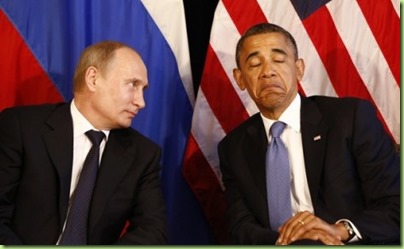 Unfortunately, just like with those pesky Islamists, if they are at war with you, you are at war with them. And if you don’t know it, or choose not to acknowledge it, you lose.

So if Pooty was watching, I’m sure he’ll get a hold of BO and apologize for his boorish behavior; or bearish, as the case may be. 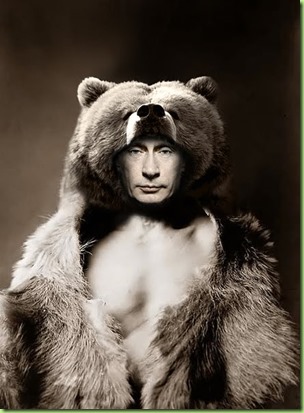 Putin, “thinking about the future,” as instructed

THIS JUST IN: BO cancels September one-on-one meeting with Pooty in Moscow: that’ll show him!...

Ended - August 6, 2013 by Barack Hussein Obama on The Tonight Show on a soundstage in Burbank, CA

And it’s about time!

Because gimmicks and sound bites are much cooler than having an actual foreign policy.

5 posted on 08/07/2013 8:47:01 AM PDT by Bubba_Leroy (The Obamanation Continues)
[ Post Reply | Private Reply | To 1 | View Replies]
To: Buckeye McFrog
"It reminds me of the heady days of Sputnik and Yuri Gagarin when the world trembled at the sound of our rockets." - Captain Ramius, "Hunt for Red October"

Dang. I never thought I would ever wax nostalgic about the Cold War. However, we did have a very clear idea of precisely who the enemy was. The world turned upside down.

Obama’s “disappointed” with Putin.
You’re not playing ‘Lucky Pierre’ with your golf playbois you homo.

A Bulls Eye Quote
Some people have the vocabulary to sum up things in a way that you can quickly understand them. This quote came from the Czech Republic . Someone over there has it figured out. It was translated into English from an article in the Prague newspaper Prager Zeitungon.

“The danger to America is not Barack Obama, but a citizenry capable of entrusting a man like him with the Presidency. It will be far easier to limit and undo the follies of an Obama presidency than to restore the necessary common sense and good judgment to a depraved electorate willing to have such a man for their president.

The problem is much deeper and far more serious than Mr. Obama, who is a mere symptom of what ails America . Blaming the prince of the fools should not blind anyone to the vast confederacy of fools that made him their prince.

The Republic can survive a Barack Obama, who is, after all, merely a fool. It is less likely to survive a multitude of fools, such as those who made him their president.”

“The Republic can survive a Barack Obama, who is, after all, merely a fool. It is less likely to survive a multitude of fools, such as those who made him their president.”

Our best hope is that come 2016, the nobama fools/low info voters will be enjoying their spoils and won’t be excited about hitlery.

Ain’t it the truth?!

As far as Putin goes, Bamster is just getting warmed up.

Look out Putie, cause if you try to piss him off any more, Bam Bam will REALLY show you, and unilaterally disarm the US of our entire nuclear arsenal, without parallel cuts with Russia/Putin this time!