History, if it’s kind, will call this America’s “coming out” week. Should it choose to be unkind, it may say “coming apart.” Either way, we’re on vacation.

Before we left, we let another squirrel out of the Supreme Court’s cage to join the circus: 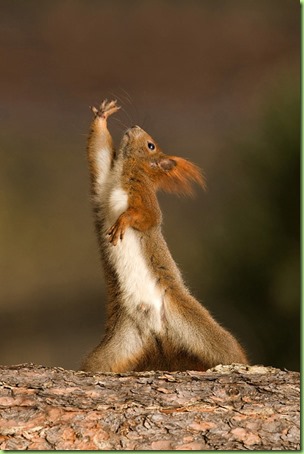 Gay Squirrel Alert! And that’s all I’m going to say about that.

Then Big Guy en famiglia boarded Air Force Won and Too for a week long visit to deepest Africa. 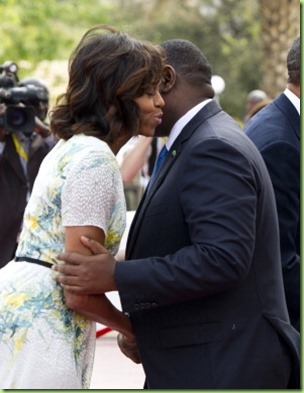 Air kisses for the President of Senegal, just like at home

He left strict orders with Harry to make sure the kids get their homework done while he’s gone. 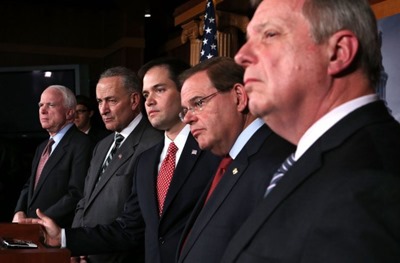 So our undocumented voters can finally come out of the shadows while they’re voting twice or thrice.

So with everything in good hands at home, and because we don’t have enough problems right here to warrant all of Big Guy’s attention, he is off to Africa to solve all the troubles in the world. Because, as you may know, he has a gift. 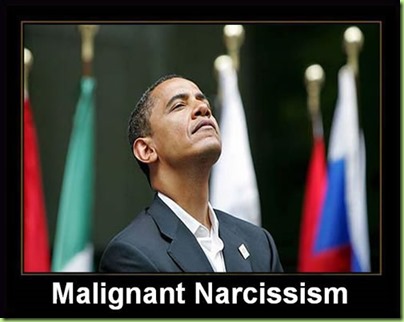 Some consider it a gift.

He’s visiting all of the political hot spots in Africa: Egypt, Sudan, Somalia, the Ivory Coast, the Democratic Republic of the Congo and Zimbabwe. No, wait – here’s are new updated itinerary: Senegal, South Africa and Tanzania. 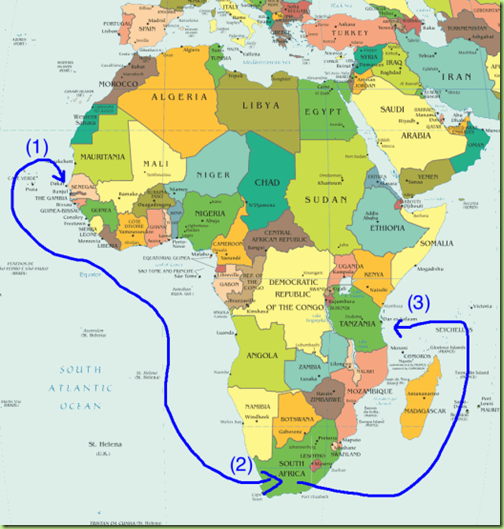 Because symbolism is important. 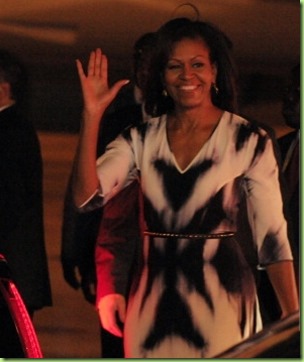 I know this airbrushed black and white frock is symbolic, I’m just not sure of what.

He HONESTLY thinks he is King.

“You’ve Got Your assignments, I’ll be in Africa.”

He should have stayed there in the first place.

Can Barry please pick up his real Birth Certificate in nearby Kenya? Or just ask cousin Odingo to run him the favor.

6 posted on 06/27/2013 8:45:44 AM PDT by tflabo (Truth or Tyranny)
[ Post Reply | Private Reply | To 1 | View Replies]
To: All
The $100 million tax-paid Ohaha African vacation does not include the million dollar giveaways to corrupt African dictators under the guise of "encouraging democracy" in countries w/strong-arm military dictatorships.

WHAT'S THAT? YOU MISSED THIS? $823,200 of economic stimulus funds in 2009 went to a UCLA research team to teach African men how to wash their genitals after having sex. NIH wanted to evaluate the feasibility of a post-coital genital hygiene program.

The genitalia-washing program is part of a larger $12-million UCLA study examining how to better encourage Africans to undergo HIV testing and counseling – however, only the penis-washing received money from the 2009 economic stimulus law. The tax-paid genitalia washing was set to end in 2011.

Obama is transporting to Africa thousands of taxpaid ***-washers attached to power hoses.

NOT TO WORRY---THE OBAMA ADMINISTRATION JUST APPROVED $50 MILLION DOLLARS IN FOREIGN AID TO KENYA--the land of his birth.

O'S KENYAN HALF BRO IS READY TO CASH IN---RUNS THE TAX-EXEMPT "DO-GOOD IN KENYA" OBAMA FOUNDATION. The tax- exempt “charity” named in honor of their Dad, is run by President Barack Obama’s half-brother Malik.

Obama’s half-brother Malik spends most of his time in Kenya with his 12 wives.

Malik holds up photo of Obama in Muslim dress
taken on a trip to Kenya when Ohaha was about 23-24 y/o.

Obama w/ his aunt in Kenya outside her jungle hut.

100million and his azz is gone for a while....might not be such a bad deal...now if he and her mouthiness will just stfu, we’ll be golden.