It was probably a mistake, planning our #AskFLOTUS live event on the 6 month anniversary of the start of Benghazigate. Twitchy is all a twitter.

Some of the haters aren’t pulling any punches, I see:

Here’s one of the more respectful ones: 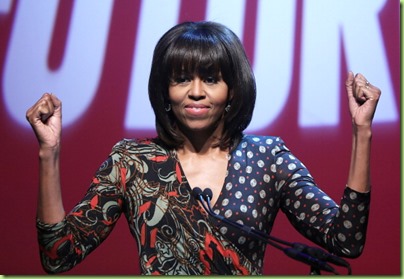 Sheeze! Where’s all this hate coming from? Moms who are still mad that their kiddies’ class trips to Washington “during the popular Spring vacation season” were cancelled?

Or do you suppose they’re actually coming from journalists who are still mad at being shut out of the annual Gridiron dinner?

So they couldn’t witness Big Guy’s sparkling humor in person:

"Of course, maintaining credibility in this cynical atmosphere is harder than ever -- incredibly challenging. My administration recently put out a photo of me skeet shooting and even that wasn't enough for some people. Next week, we're releasing a photo of me clinging to religion," he said to what the White House transcript called "laughter and applause." 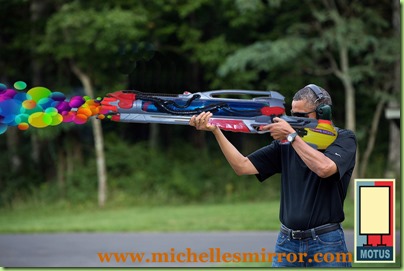 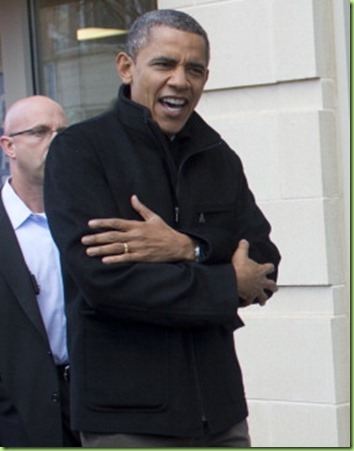 Skeeter, clinging to “his religion”

Butt enough of that: I need to catch you up on last week’s important “Women of Courage” awards. (snip) 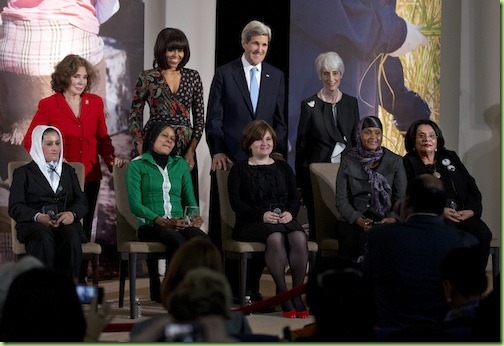 Hey, who are the two tranny’s in the back row next to Teresa Heinz Carre?

NOTE: Dewey asked me to announce that Know Thy Enemy III: Celebrity Culture is now available for your consideration.

I’m working on a theory as to why that is but so far I think it has to do with conservatives being more effective putting ideas and creative thoughts into 140 characters or less.

Part of it, I think, is the ability to be clever and creative in such a limited format; the left typically just repeats the same phrases over and over, and it shows.

I think another part is that, compared to say, Facebook, Twitter is followed by interest, not association. That is, on Facebook, I tend to shy away from things like politics, because they are subjects guaranteed to alienate roughly half of the people on my feed.

Twitter, in comparison, seems to be more used for expressing what’s on your mind rather than what’s going on in your life, so to speak. As such, it seems to invite more open debate. Also, through the use of mentions and tending tags, it’s easy to get involved in the hot topic(s) of the day.

I’m amazed that people like McCain and Graham have kept their facebook pages and now Michelle Obama on twitter. They are all getting smashed. The comments against them are BRUTAL!

These people must have the biggest egos on the planet. They obviously have no idea about the rest of the country and what is going on with thinking people.

Makes sense to me.

MooseChelle is the American Marie Antoinette.

The peons may protest on Tweater, but her reign continues unaffected.

ALL YOUR ALINSKY BELONGS TO US NOW!!!

I wonder if Barry likes her short haired/bald for...hence the wigs.

All the illegals will call her, Moocheetos.

Alinsky, you magnificent bastard, we read your book!

I don’t have a twitter account but if I did I would ask Floatus...Aren’t you glad Rev. Wright talked you into staying with barry even though he is living on the ‘down low’?

When you two do a photo op kiss, do you have him wash his mouth with peroxide first?

Look at the ghouls sitting down. What country is this again?