As Obama Can't Even Come Close to 50% in Polls, His Electoral Future Withers
http://libertarian-neocon.blogspot.com/2012/10/as-obama-cant-even-come-close-to-50-in.html ^ | libertarian neocon

There's a rule of thumb that if an incumbent is polling under 50%, that they are in deep trouble, as many of the undecideds tend to break for the challenger.  Therefore, in many ways it is more important what the absolute level of the incumbent in polls rather than where his challenger is (to a point at least).  If you look at the incumbent elections since 1956, the last Gallup poll has been extremely accurate in terms of predicting what the incumbent gets on election day and its hard for incumbents to gain any ground at the polls: 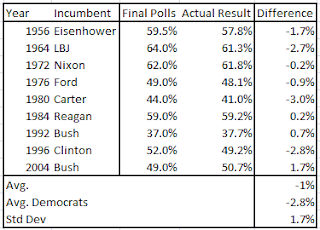 As you can see, in 6 out of 9 races, the Gallup estimate is higher than the actual vote percentage that the incumbent receives. In the three races where the incumbent outperformed, the incumbent was a Republican (Reagan, Bush I and Bush II) which could speak to bias in polling results as it is viewed as "uncool" to say you are a Republican.  Anyway, on average, Gallup overestimates the incumbent percentage by 1% and a whopping 2.8% for incumbent Democrats.   As Obama is polling at 46% in the latest Gallup tracking poll and at 46.8% in the RCP average, he seems to be in deep trouble.  He doesn't even poll at 50% in a single poll and in only 3 out of 10 is he even over 47%.  My guess is hat on election day, Romney wins big with 52-53% of the popular vote.

What about the electoral vote? First, I highly doubt that if someone gets 52-53% of the vote that he doesn't win the electoral unless he gets something like 100% in California and New York, which Romney clearly won't get.  Second, Obama isn't exactly polling over 50% in the battleground states either: 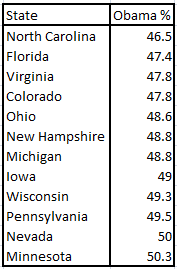 As you can see, Romney seems to have a decent shot of winning NC, FL, VA, CO, OH, NH and even Michigan and then a relatively good shot of also taking IA, WI and PA.  If he just takes the states where Obama is polling less than 49%, he is at 295 electoral votes with a map like this: 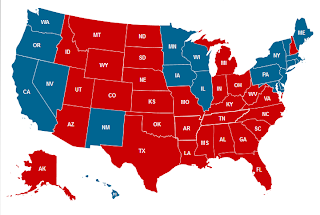 And if Romney gets all the states where Obama is polling at under 50%, he is at 331 electoral votes with a map that looks like this: 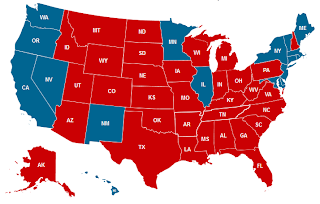 Romney will be elected President on November 6th and our nation will finally be able to recover.  It will be like our second Independence Day!

and if Oloser actual results are his final poll number minus the average 2.8% overstatement sited in this artical, then he will only get about 43% and he will not carry MN and PA, and maybe a couple of others that are not being discussed.

I believe this is what will really happen, that the current 46% is overstated. This is because 1. bias in polling 2. steadily losing momentum 3. undecides will break against him 4. marginal voters will switch to the winner

We have to remember voter fraud and the corrupt media. I wouldn’t put it past them to announce obama as the winner then shut down operations.

I think Zero will loose MN. We have 2 constitutional measures on the ballot geared towards the more conservative side. The defense of marriage and voter ID.

This should drive more of the right to the polls than the 2-5% that care about getting married.

If Romney does not win MN it’ll be with in a point or two. Obama will not be able to muster much more than that.

it’s not over until it is over. Get every GOP vote out. No relaxing until this battle is over and then only a short relaxation, we need to win the Senate and Congress