We haven’t been doing so good lately with our Supremes arguments. First the slap down in Sackett vs. EPA, then the Obamacare arguments,

which were so painful they were handing out prescription pain-killers outside chambers, and now, more judicial rough-up – by our friends no less – on the Arizona Immigration Law? Even the wise Latina had a hard time understanding the wisdom of the Solicitor General’s arguments:

JUSTICE SOTOMAYOR: General, I’m terribly confused by your answer. O.K.? And I don’t know that you’re focusing in on what I believe my colleagues are trying to get to.

Can I get to a different question? …Because I, frankly — as the chief has said to you, it’s not that it’s forcing you to change your enforcement priorities. You don’t have to take the person into custody. So what’s left of your argument?

...When it’s no longer even good enough for government work, maybe we need to get a new top legal beagle. Say! Wasn’t Big Guy a lawyer at one time? Maybe he can buy his law license back and school the Supreme Court on constitutional law himself!!!

Or wait, that won’t work. He’s already got a job.

Okay then, we turn to our second line of defense. Lady M is nearly as eloquent a speaker as Big Guy. We could temporarily reassign her from fundraising detail to Clean Up on the Supreme Court. Assuming the repurchase of her voluntarily surrendered law license can be completed in time to make oral arguments...

Great photoshop of "Professer" Obama at the chalkboard! 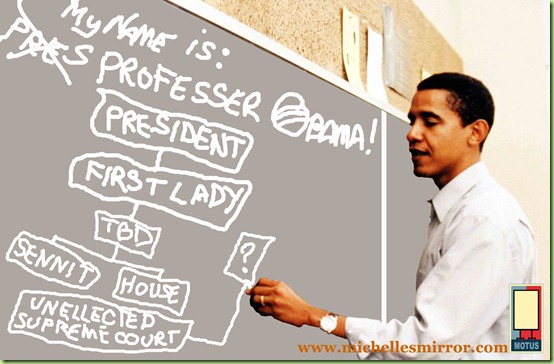 Don’t be fooled. Soto and Kegan both value voters on a string, landscaping work done at a low price in suburban DC, and the joy of slight of hand in an argument.

Was this Vermicelli guy a law professor before he got this job ?