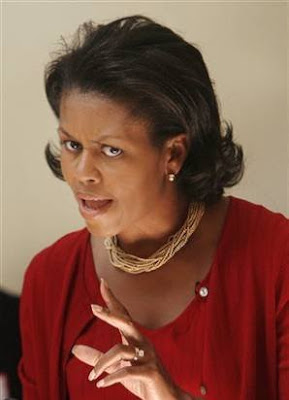 After Barack Obama became an Illinois state legislator, his wife moved up as well, scoring a job as 'vice president of community relations' at the University Of Chicago Hospital for a very generous salary of $121,910. When Obama became a senator in 2005, her 'salary' leapfrogged to $$316,962 for the same job...and one of Senator Obama's first acts in office was to see to it that the hospital received over a million dollars of your tax dollars as an earmark.

Well, Michelle has moved on,and guess what...that vital job of hers,worth a salary of over $300 K has been quietly eliminated.

It's the Chicago Way, cushy no-show jobs in exchange for political patronage...fist bump.

Of course, she had to work twice as hard to get half as far. She said so, so it must be true.

But I wonder, is this so very different that what Rod Blagojevich was popped for? Except that Blagojevich got caught and embarrassed everybody?

You forget: they are entitled!

And her husband is a bum, too.

We don’t have access to his high school or college transcripts.

We don’t have access to his theses and dissertation.

And if I had “community organizer” in my resume, it would very likely automatically eliminate me for consideration for any real, non-political job.

Rezko, Obama’s Daddy warbucks, went to jail for extorting consulting contracts out of a Chicago area hospital in exchange for favorable consideration by the IL State hospital board...which had members appointed by Obama. The MSM ignores these links..

As has Boxer, Pelosi and the Hillabeast.

Hmmmm, there seems to be a pattern there.

I keep wondering how bimbos who would have never gotten past working at the local whatever store become democrat politicians. Oh....forgot....democrat.

“Obama is turning us into a lawless banana republic.”

Worse, a banana republic that has two distinct versions of law enforcement.

If you don’t belong the AG’s “my people” set, you’re out of luck.

So much for equal protection under the law...

And the hospital couldn’t have been happier to eliminate the position.

Here... this will brighten your day.

This is Chicago way. A model of efficiency.

Link scrubbed. This from the Wayback machine:

She hasn’t shown up for work very regularly over the last year or so, so when Michelle Obama’s $300,000 job was cut at the University of Chicago Hospitals, it may have been hard to notice the difference.  Crain’s skipped the part about the incoming First Lady, must have been an oversight in their expert analysis of Chicago Business, because we know Crain’s is “Not show business. All business”.

The Tribune announced the layoff without much analysis, but let the cat far enough out of the bag to prompt our Don Rose to question how important Michelle Obama’s job must have been, as it was so easily eliminated.  The New Republic gnashes their dentures at the how a community can be served without Michelle Obama, despite the void of actual labor she has performed while being on the campaign trail.  The comments are much more informative than the article in TNR.

The Washington Post smells a rat, with a critical article of a lawyer from U of C hospitals, who worked with Michelle Obama in implementing a rationalization of emergency healthcare delivery.  The lawyer, Susan Sher, had the nerve to co-operate with President Bush and the Federal Government’s initiatives to deliver emergency care in the emergency room, and everyday care in health clinics.  No word on the Michelle’s level of co-operation with the Bush administration at her executive position.

The Univesity of Chicago Press Room continues to impress with stories about blood cancer therapies and a Webcast of innovative cardiac surgery, but is tight lipped about layoffs effecting the First Lady and 15 other senior executives.

The head of the U of Chicago Hospital at the time was/is a big Obama campaign contributor.

That reminds me!
Free Republic could use a fill-up too


14 posted on 04/12/2012 9:23:08 AM PDT by TheOldLady (FReepmail me to get ON or OFF the ZOT LIGHTNING ping list)
[ Post Reply | Private Reply | View Replies]
To: E. Pluribus Unum
As was her gig at Treehouse Foods. The woman was very busy collecting her checks for doing nothing.

Sam Reed, the CEO @ Treehouse Foods (Chicago HQ) is mysteriously suffering a gag order on her tenure on the board.

Of course it was a payoff.Even a 10 year old can figure it out.But don’t try telling that to Chrissy Matthews or Tawana Brawley’s favorite “Reverend”.

16 posted on 04/12/2012 11:36:00 AM PDT by Gay State Conservative (Jimmy Carter Is No Longer The Worst President To Have Served In My Lifetime.)
[ Post Reply | Private Reply | To 1 | View Replies]
To: AdmSmith; AnonymousConservative; Berosus; bigheadfred; Bockscar; ColdOne; Convert from ECUSA; ...

Hey, there weren’t any Demwits available to take the job. Geez.

"...that vital job of hers, worth a salary of over $300 K has been quietly eliminated."

Link scrubbed. This from the Wayback machine:

She hasn’t shown up for work very regularly over the last year or so, - so when Michelle Obama’s $300,000 job was cut at the University of Chicago Hospitals, it may have been hard to notice the difference.

I did a search for Treehouse Foods on yahoo and the link to this went all goofy. It was there on the search page and then it wasn’t. The declining profits chart keeps coming and going on the search page. When clicking on the original link, it had already been srubbed after being posted yesterday. Here’s the cached link: