The Media Says The Economy is Improving, But You Don't Feel It. Who's Right? You Are.
http://libertarian-neocon.blogspot.com/2012/02/media-says-economy-is-improving-but-you.html ^ | libertarian neocon

The market's up, Real GDP was up 2.8% in the fourth quarter of 2011 and unemployment is down to 8.3%, you should be happy as the economy seems to be finally getting out of its slump.  Instead, you, as they did in Star Wars, "have a bad feeling about this".  Well, there is good reason for this as the economy is nowhere near as good as the headline statistics are saying and some are showing that it's getting worse. The Bureau of Economic Analysis itself admitted that over 1.9% of the 2.8% growth we saw in the 4th quarter came from increasing private inventories, which is pretty much the equivalent of a private company "stuffing the channel" to make their earnings estimates.  The GDP number is more accounting gimmickry than a sign of actual growth of the economy.

And as I have mentioned before, the unemployment rate that is released every month is pretty much pure fiction.  If you account for the long term unemployed dropping out of the work force, the picture is still pretty dire.  If you keep the labor participation rate constant with the month before Obama was elected, our current unemployment rate is 11.4%!  Take a look at the graph below which shows the official rate in red and the true rate in blue: 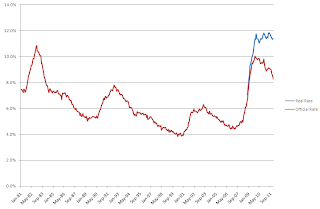 As you can see, there are still hordes of people that are unemployed right now and the only reason that the rate is improving is because of people in the prime of their working years not even trying to find work anymore.

It also is very interesting that while GDP keep increasing a number that isn't increasing is real disposable personal income per capita (the money that the average American makes after taxes). Somehow we are growing without people making more money, try figuring that one out: 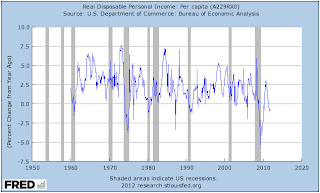 As of December of 2011, the average American is making 0.8% less after taxes than they did the year before.  This is a level of decrease we almost never see in times of growth and even didn't see in 3 out of 10 recessions!  If people don't make money, they can't get themselves out of debt and they don't have any incremental dollars to spend, hurting the rest of the economy.

There are a couple of  indicators coming from the energy sector which show signs the economy is turning over and not turning around.  Usually, when the economy is hitting on all cylinders, more energy is consumed.  We use more gasoline and consume more electric power.  That doesn't seem to be the case right now as you can see from this graph of data from the Energy Information Administration (EIA) of retail gasoline supplied: 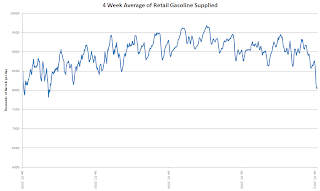 While there is quite a bit of volatility in this statistic, usually, we can see that we are very abnormally falling off of a cliff right now.  And in the past this has been a relatively decent indicator of long term trends as it had peaked on August 24, 2007 and the recession officially started in December of that year.

I am not an expert in energy and do realize that any statistic could have kinks in it but it seems that this weakness is being seen across the energy sector as Charles Hugh Smith has pointed out.  Just take a look at the chart of electric power consumption for the United States.  It shows that we are still below the previous peak and seem to be rolling over as we speak.: 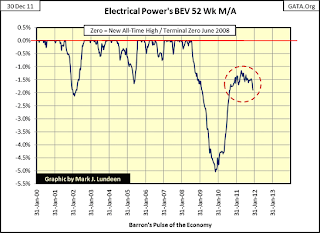 And finally, Morgan Stanley recently published a chart which showed that South Korea, Taiwan and China are all reporting a fall in exports compared to the previous year.  Much of this is probably related to weakness in Europe but as we are all interconnected, it surely isn't a great sign since these countries also supply the items that we buy: 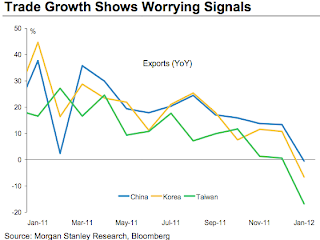 What's really scary is that all of this is happening before any actual Greek default (which many are saying is increasingly likely for March 20th) and before any conflagration in the Middle East which could cause a massive shock to the economy (as Saudi oil fields are in harms way).

Anyway, we'll see what happens.  The environment is challenging to say the least right now and there are definite risks to the downside coming up.  The only thing you really can do in times like this is stay nimble, try to stay liquid and hope that we elect a true pro-growth President come November.

Improving as defined by the MSM, George Soros and gov’t democrats where things are more miserable for ordinary folks. They define a good economy where there are a lot of layoffs and those who keep their jobs have to work much harder, longer and for less.

look for more happy talk from the MSM—the propaganda will be believed by a few—Its Pravda all over again.

Look for gas prices to drop just before the election—and a great many temporary jobs put in—to make things look as if they are improving—after the election they will raise gas prices to 5 dollars a gallon and fire a lot of folks.

I couldn’t watch any of the major news stations last night, it was all State controlled baloney. It reminded me of the Soviet news in Russia. Has the US already become totalitarian?
It angered me - I used to be able to watch the news and get the news.
All gone now.

“I couldn’t watch any of the major news stations last night, it was all State controlled baloney. It reminded me of the Soviet news in Russia. Has the US already become totalitarian?”

Well in some ways yes. You have to pay for free contraception whether you want to or not. I can’t think of a more Orwellian phrase than that?

I stopped watching the news long ago. I cant even watch Fox.