Gay Pride Week in Boston was officially ten days (June 3-12) of public events, block parties, festivals, and parades celebrating every kind of homosexual activity imaginable. As in recent years transgenderism and cross-dressing have been taking a more prominent role, as well as BDSM (bondage, sadomasochism, "leather culture"). There is also a big dose of anti-religious (particularly anti-Catholic) fervor. Besides homosexual Catholic groups, the offensive and blasphemous "Sisters of Perpetual Indulgence" -- a group of homosexual men dressed up as nuns to mock the Church -- marched in the Gay Pride Parade this year. But even they were dwarfed by the overwhelming number of depraved and perverted groups in the parade along with them.

This is a rude thing to ask...but...why would anyone be proud about being gay?

Not so rude, really. 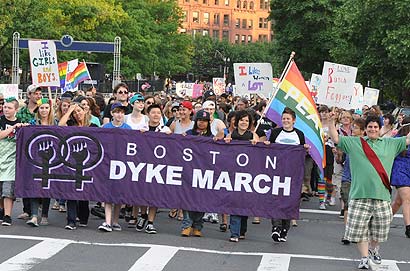 This was the scene on Charles Street in downtown Boston on Friday evening. 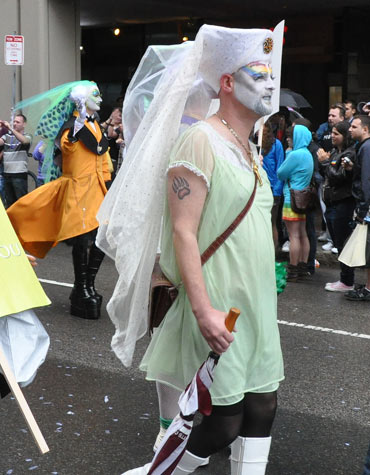 Men dressed as twisted versions of nuns, calling themselves "Sisters of Perpetual Indulgance," marched in the Gay Pride Parade in Boston to mock the Catholic Church.

I wonder if Homo Depot and Old (Dirt Road) Navy are sponsoring it?

7 posted on 06/16/2011 1:03:36 PM PDT by Linda Frances
[ Post Reply | Private Reply | To 1 | View Replies]
To: massmike
Like cancer patients celebrating how neat their disease is and sharing every possible form of it with others.

Sad and dangerous because, unlike cancer, this can be a contagious disease especially to the young and unwary.

Somehow I missed it. Maybe next year.

So, because of the liberal thought process, it stands to reason that people should be proud of being gay.

But this only works for officially recognized aggrieved minority groups. You couldn’t have “straight pride” because that’s not politically correct.

It’s the same as black pride or other ethnic pride. A black mayor of a largely black city such as New Orleans can proclaim that New Orleans will be a chocolate city, and it’s all good. But we all know that if the mayor of St. Cloud Minnesota praised his town as a cloud city or a vanilla city, all he** would break loose as liberals and the MSM hyperventilated, and politicians and educators convened seminars on the topic of hate and injustice and such.

Saturday, the day of the “gay” parade, was the eve of the Great Feast of Pentecost. We Orthodox Christians celebrate the Vigil of Pentecost, typically beginning in the early evenIng that day.

I hope that no Boston-area Orthodox Christians had to witness any of the Sodom-like depravity on their way to the Vigil, or hear any of the obscene chants through their church windows as they began the service!!!!

The cultural terrorism of Leftist political correctness has made our society positively grotesque. The gene controlled construction of the human body places reproduction only slightly behind survival as a prime directive for complex organic existence.As no so-called "homosexual gene" has been discovered and since the scientific method dictates empirical evidence to support any proposition--homosex is not only a sin but counterevolutionary--and it's A DAMN SHAME that counterevolutionaries are allowed to browbeat,threaten and harass those who are simply following nature's orders.

Once again, in the diocese where “relativism” is a household word, we’ve got a Boston Catholic parish hosting a Mass to celebrate “Gay Pride” with the full knowledge of the archdiocesan hierarchy. The same parish’s “Rainbow Ministry” is also sponsoring a trip to see the Boston Gay Men’s Chorus and on the same page with those notices, they ask parishioners to support the retirement, medical and financial needs of the priests of the Archdiocese who have have given their lives to faithfully serve Christ.

The parish is St. Cecilia in Boston. Here’s their latest bulletin, and the troubling notices:

The Rainbow Ministry of Saint Cecilia Parish invites all friends and supporters of the LGBT community to a Mass in celebration of Boston’s Pride Month. The liturgy will take place on Sunday evening, June 19, at six o’clock, with a reception following. The theme of the liturgy, “All Are Welcome,” honors Christ’s message of hope and salvation to all people. We will also celebrate the diverse community that finds its home at Saint Cecilia and acknowledge, in a special way, the generous and warm welcome extended to the members of the Jesuit Urban Center in 2007. The Mass will be celebrated by Father John Unni and concelebrated by several of the priests who faithfully ministered at the Jesuit Urban Center for many years. Please plan to attend this special liturgy and support the diversity that makes Saint Cecilia such a special place.

It has grown from one day to ten. There has got to be big money behind these events.

Or to put it another way:

Are you a traditional, heterosexual, monogamous Christian or Jew? Guess what?

In today's culture: you're the one "in the closet".

The thing is there are straight that are in to the same thing (bondage, sadomasochism, "leather culture") but it not the focus of straight "Pride"...Gay's center there Pride on there Kinks

A true Gay Pride Parade would be Gay in regular dress marching like any other group... But what you get is a "Sexual kink Parade" by Gays

“Poofter Pride.”
The cultural terrorism of Leftist political correctness has made our society positively grotesque.”

These people are obviously suffering from a mental disorder.