Alleluia! Christ is risen! (“He is risen indeed! Alleluia!”)

That’s the first thing we said this morning at the start of this service, and it is the first thing to say now. Christ’s resurrection is of such paramount and overarching importance that we put it first and foremost here on Easter Day, right up front. “First Things First.”

And it was passed on. For we find almost these same exact words from 1 Corinthians 15 showing up a couple of centuries later in the Nicene Creed: “And the third day he rose again according to the Scriptures.” We just confessed it here. So from Jerusalem to Corinth to Nicaea to Bonne Terre, Missouri, the same message has been resounding through the centuries: The Lord Jesus Christ, who died on the cross for our sins, whose body was buried in the tomb, on the third day rose, bodily, from the dead. And all this was according to God’s plan, according to the Scriptures God had inspired his prophets to write centuries earlier. This is first and foremost, “of first importance,” in the gospel that Paul preached and that we continue to preach still to this day. “First Things First.”

Without these great facts, and without them at the forefront, there is no Christianity. There is no gospel. There is no hope. There is nothing to preach, nothing to believe. “If Christ has not been raised,” Paul says later in 1 Corinthians 15, “If Christ has not been raised, your faith is futile and you are still in your sins.” And again, “If in this life only we have hoped in Christ, we are of all people most to be pitied.” It’s all riding on Christ actually being raised from the dead, physically, bodily. If not for that, there’s nothing there.

This is serious business. The implications are life and death. If Christ has not been raised, then you will not be raised, either. Death will come and take you away, and that’s the end of the story. Your heart stops beating, your lungs stop breathing, brainwave activity ceases, and this worn-out collection of organs and tissues becomes nothing more than compost for somebody’s garden. Human beings are just an accidental phenomenon of evolution, an evolved mass of tissue and bone, no different from armadillos or daffodils, roadkill waiting to happen, bodies so cheap they can be burned up and disposed of like so much refuse. Human life loses its value and meaning, if Christ has not been raised. Death is the end of the road, and that’s it. Nothing more. “Were Christ not arisen, then death were still our prison.”

Everything is up for grabs if Christ has not been raised. Life becomes a joke, a cruel joke. Shakespeare captured this emptiness when he wrote, “Life is a tale told by an idiot, full of sound and fury, signifying nothing.” Thomas Hobbes described the life of man as “solitary, poor, nasty, brutish, and short.” That is what life amounts to if Christ has not been raised from the dead. All that’s left is to distract ourselves from our own coming doom and amuse ourselves to death while we’re waiting.

Since Christ has indeed been raised, then he is telling the truth in everything he says and the gospels are the true record you can rely on. “He is risen, just as he said,” and “These things are written that you may believe that Jesus is the Christ, the Son of God, and that by believing you may have life in his name.”

Since Christ has indeed been raised, then you are not still in your sins, you are not lost. Christ’s resurrection validates and puts God’s stamp of approval on everything Jesus did when he bled and died there on the cross. God accepted Christ’s sacrifice for sin, said yes to it. By raising Jesus from the dead, God the Father said of his death on the cross, “Yes, my Son, that does the job, that covers all sins for all time. Job well done. The debt of sin for humanity has been paid, paid in full.” Easter, Christ’s resurrection, says yes therefore to your forgiveness. What Jesus did on Good Friday covered all of your sins, dear Christian. Your faith in Christ is not futile, not by a long shot. Your faith is fruitful, not futile, and you are freed from your sins.

Since Christ has indeed been raised, then that makes Christianity the one true religion in all the world. When Jesus said, “I am the way and the truth and the life; no one comes to the Father except through me,” he wasn’t kidding. The mockers and ridiculers of Christ and his church--they may mock and they may ridicule, but they are wrong, dead wrong. Yesterday I saw a survey that said 79% of Americans believe Jesus Christ rose from the dead. Well, at the final survey--at the final survey, that number’s going to change to 100%, only they won’t all be happy about it.

Since Christ has indeed been raised, then the church is the most relevant place to be in all the world. For here in the church you get something you get nowhere else: You get Christ himself speaking his words of life to you through the preaching of the gospel. You get Christ himself giving you his body and his blood in this sacrament, for you, for your forgiveness, and for the strengthening of your faith. Jesus is here, and therefore there is no better place on earth to be.

And since Christ has indeed been raised, then death is not the end of the story for you. There is something more in store. Death is not the end of the line for those who die in Christ. By his being raised from the dead, Christ is “the firstfruits of those who have fallen asleep,” meaning, there are more to follow. Your loved ones who have died in the faith, all the great saints of the past and all the unknown saints too, you and I and all who put their trust in Christ--we will not be disappointed. For you and I--our mortal bodies will be raised at the Last Day, new and glorious, and fitted out for eternal life. In Christ we have new life in this life, yes, but beyond that, we have hope, sure hope, for the life to come. Therefore we are of all people, not the most to be pitied, but rather the most abundantly blessed.

Alleluia! Christ is risen! (“He is risen indeed! Alleluia!”)

For I delivered to you as of first importance what I also received: that Christ died for our sins in accordance with the Scriptures, that he was buried, that he was raised on the third day in accordance with the Scriptures, and that he appeared to Cephas, then to the twelve. Then he appeared to more than five hundred brothers at one time, most of whom are still alive, though some have fallen asleep. Then he appeared to James, then to all the apostles. Last of all, as to one untimely born, he appeared also to me. For I am the least of the apostles, unworthy to be called an apostle, because I persecuted the church of God. But by the grace of God I am what I am, and his grace toward me was not in vain. On the contrary, I worked harder than any of them, though it was not I, but the grace of God that is with me. Whether then it was I or they, so we preach and so you believed.

But in fact Christ has been raised from the dead, the firstfruits of those who have fallen asleep. 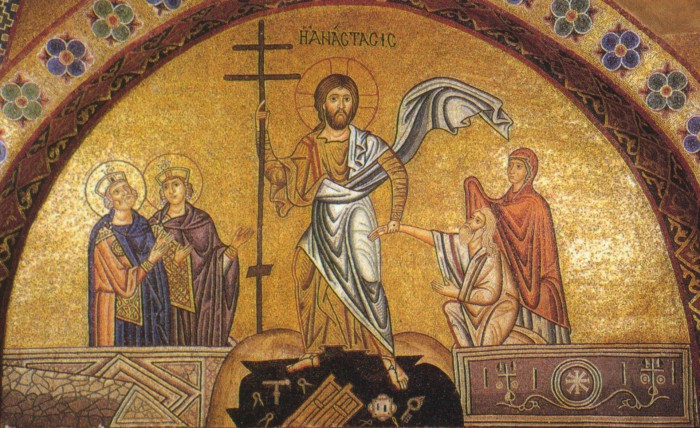 A Blessed Easter to all!

“He died for all that they which live should not henceforth live unto themselves, but unto Him which died for them and rose again.” 2 Cor. 5:15

Just as I am, without one plea
But that Thy blood was shed for me
And that Thou bid’st me come to Thee
O Lamb of God, I come, I come!

If you have a ping list please add me......I am enjoying your teachings....

10 posted on 04/11/2009 7:07:15 PM PDT by Kimmers (Be the kind of person when your feet hit the floor each morning the devil says, Oh crap, he's awake!)
[ Post Reply | Private Reply | To 1 | View Replies]
To: Charles Henrickson
I know that my Redeemer lives
What comfort this sweet sentence gives
He lives, He lives, who once was dead
He lives, my ever-living Head

He lives, all glory to His name
He lives, my Jesus, still the same
Oh, the sweet joy this sentence gives
"I know that my Redeemer lives!"

Glad Pask to you too

And for those of you who celebrate a more secular Easter - please don't overdo the chocolate!

We can look confidently at what Christ has done (confidence in Christ, not confidence in ourselves) and we can look to what Christ will do in the future! We can have confidence in these words: (John 14:3) “And if I go and prepare a place for you, I will come again, and receive you unto myself; that where I am, there ye may be also.”

A Happy Easter to all. For us, after service & breakfast we’re going to be painting a bedroom while our ham is roasting... Then we’ll be watching the Masters.

Happy Easter to you too Pastor!

“He is risen indeed”.

"He has risen indeed!"

Now that church is over and breakfast enjoyed, it's time to celebrate at home.