DO YOU KNOW WHO I AM? 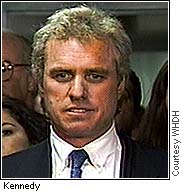 Ah yes......
The Imperial Kennedys.....
Darlings of the communist Left -- because with them in leadership, America would soon be destroyed.

A larger POS would be hard to find...

I'd like to pay off my mortgage and car loan, and I'd love a steady income after I stop working. That makes me the same as exactly everyone else, I'd imagine.

I can empathize with this lady, but she was awarded $600K in the early '70s and elected not to sue for damages because she was star-struck by the Kennedy family. I am no Kennedy apologist, but I'm going to have to side with Joe on this one. I don't think he "owes" her anything other than what he's already given her.

The Kennedys are scum, but Joe is really at the bottom of the barrel. Not only is he amoral, he is dumb as a fencepost. He was pathetic as a Congressman. If he is broke, it's because he is too stupid to earn a living doing anything on his own.