Donald Trump is fond of saying that he was the first to talk about a border wall or fence, but back in 2013 when Ted Cruz was pushing an amendment to create it, Donald Trump was actually meeting with a bunch of illegal alien activists to boast about the many illegal aliens who work at his resorts.

...at his New York penthouse office atop Trump Tower, he convened a meeting.

Trump ushered in a pair of men - one to talk about the awards and a Democratic strategist who works with nonprofits - and three young DREAMer activists. The DREAMers were on a tour sharing their stories with those less likely to support them, like tea party supporters.

"You know, the truth is I have a lot of illegals working for me in Miami," he told them, using the term for undocumented immigrants those in the meeting found offensive. "You know in Miami, my golf course is tended by all these Hispanics - if it wasn't for them my lawn wouldn't be the lawn it is; it's the best lawn," Pacheco recalled Trump saying.

Trump said he knew the work of undocumented people is what makes his golf courses and hotels great.

"You've convinced me," Trump said to the delight of the activists in the room.

"We all smiled at each other and said, 'Wow, we did it, we got this guy to change his mind,'" Pacheco said.

Trump was "convinced" to support citizenship for illegal aliens. That's old news, and Trump-bots will claim he has changed his views in two short years. But what is news is that Trump has admitted that he employed large numbers of illegal aliens and undoubtedly still does today, in 2016. How can he credibly run for President on a platform of deporting illegal aliens when he currently, today, employs large numbers of them? Why has he never tried to verify the identity of his employees? If he is content employing large number of illegals, how sincere can he be about deporting them?

Trump's like a bank robber running for president of a bank while still employing robbers to go out and rob banks.

In fact, Trump, who talks incessantly about "bringing jobs back to America" has repeatedly tried to import foreigners to take jobs away from Americans.

GOP 2016 frontrunner Donald Trump is staking his campaign on promises to bring jobs back to America, but a new analysis of U.S. Labor records shows that Trumpâ€™s business have imported more than 1,100 foreign workers on temporary visas since 2000. ' One of Mr. Trumps companies, the elite Mar-a-Lago resort in Florida, applied to import 70 foreign workers to serve as cooks, wait staff and cleaners this month alone, Reuters reported Friday.

Nine companies that are majority-owned by Mr. Trump have sought to bring in foreign waitresses, cooks, vineyard workers and other laborers on temporary work-visa programs.

Why couldn't Trump fill those jobs with Americans? Because he wanted the cheapest labor possible, and he cares nothing about giving jobs to Americans.

Trump has said he wants to deport illegals and "bring the good ones back". From his own personal business dealings,which continue to this very day, it is clear that he is a hypocrite who cares nothing about the illegal alien problem as long as it helps him line his pockets. I think he will bring all the illegal aliens back. A man who has changed political parties at least five times, leaving the Republican party twice before, cannot be trusted.

At least he is honest about it.

Ed Straker is resurrecting the old Politico hit job that reported random “Dreamers”— who admit ambushing Trump in his office— and also admit they have no actual proof that anything they claim was said was actually said. In fact, this is the 3rd or 4th anti-Trump post I’ve seen of him over the past few days.

The Cruz supporters have been ranting and raving the past few days about Trump being desperate, but it seems like it’s the other way around.

Maybe he intends to deport all those illegals that don’t work for him......that’s just fine with me!

What were Rubio, Bush, Kasich, Cruz, etc doing about illegal immigration Belford Trump started talking about it? They are all in gubmint but did nothing as far as I can tell.

The E-Verify is a good way to hire ‘immigrants’ because if they have a record it comes up, and then he doesn't hire them...he's on top of this...

The media is so dishonest and yet it so ‘right in your face’ when they print lies and misrepresent the facts, especially when you know where exactly your candidate stands....

Someone sent me that the other day. It was very revealing. By requesting work visas, he would be totally within the law!

His supporters will say he had to do it. All businesses, they’ll say, have to do it. That’s what they say about his financing Democrats. According to many Trump supporters, all businessmen give to Democrats. And, another line of reasoning is, he was so rich he had to give to them.

Strangely, Trump doesn’t give to his own charity. 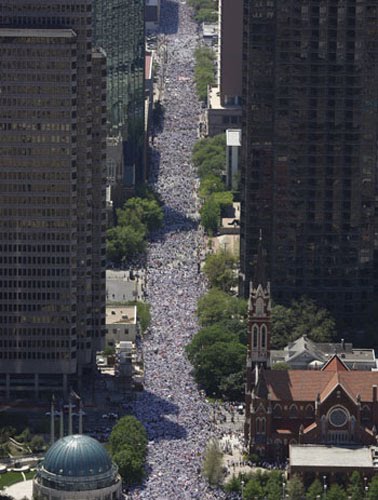 500,000 illegal aliens march on Dallas Texas pushing foreign flags in our faces and while making demands and threats. All while Bush celebrated Cinco De Mayo up in the White House...This during war time folks!

No enough? His Homeland security boss Chertoff was found to have illegals wandering around his private residence.

Yes. But if he confirms these statements he has admitted to breaking Federal Law. Not good.

16 posted on 01/11/2016 10:36:35 AM PST by Bloody Sam Roberts (Democracy is not freedom. Democracy is simply majoritarianism. It is incompatible with real freedom.)
[ Post Reply | Private Reply | To 2 | View Replies]
To: conservativejoy

The screed you posted also contains many of the things you parrot here daily. Did you write this? It even uses the juvenile name calling.

Do we want an individual who surrenders so quickly to such “ambushers” to be our Commander-in-Chief?

19 posted on 01/11/2016 10:40:12 AM PST by aMorePerfectUnion (As a representative of Earth, I officially welcome Global Warming to our planet)
[ Post Reply | Private Reply | To 1 | View Replies]
To: House Atreides
Wow â€˜Punyâ€™, judging by the picture at the linked article

Because it's a picture crafted by Buzzfeed and Politico, for which they have no evidence for except the word of Communists and illegal aliens.