Who Will Stop Putin's Aggression

I recently posted this article: Why Russia No Longer Fears the West. The author, one Ben Judah, made the point that the West lately projects an image of weakness, and Putin has been emboldened by it.

I'd say that the author correctly identified one aspect of Putin's mentality: a thug's respect for another thug, the corollary of which is a thug's dismissal of civilized behavior as weakness. It is from that mental vantage point that Putin developed his recent moxie.

The reality is that the West is responding calmly but also firmly. I think that the men in the corridors of power sent Obama to the beach and worked up an effective response. Here Kerry softly suggests that diplomatic relations with Russian Federation may not last past the occupation of Crimea:

"He made clear that continued military escalation and provocation in Crimea or elsewhere in Ukraine, along with steps to annex Crimea to Russia would close any available space for diplomacy, and he urged utmost restraint," the official said.

we’re seeking aggressively to resolve this diplomatically, before we would reach the point where there could be a miscalculation.

It’s probably worth mentioning why this is so unsettling to the Eastern Europeans. You know, we live here in America and sometimes don’t understand the realities of geography and demographics in Eastern Europe.

There are — if Russia is allowed to do this, which is to say move into a sovereign country under the guise of protecting ethnic Russians in Ukraine, it exposes Eastern Europe to some significant risk, because there are ethnic enclaves all over Eastern Europe and the Balkans.

I will give you one example. There are 400,000 ethnic Romanians living in Ukraine. So this is enormously unsettling.

Yet there is another force or forces that Putin would do well to fear. They are the people of Central and Eastern Europe. They won't let NATO slide into pacifism. The countries that joined NATO celebrate the wisdom of doing so today.

When I met the Polish PM I was struck by his belief that joining the EU and Nato would protect his country from being invaded by Russia.

John Prescott: Ukraine crisis is best solved by 'jaw-jaw' and not 'war-war'

In Prague, there was a demonstration against the occupation of Ukraine:

Down with Communist Fascism!

For your Freedom and Ours

In Moscow, the Russians support independent Ukraine. Not many, so far; definitely not enough. But the Russian nation will wake up one day to the fact that their greatest enemy is their Soviet legacy. This is who will stop Putin.. This is a priest from Nikolaev on the street in Simferopol: 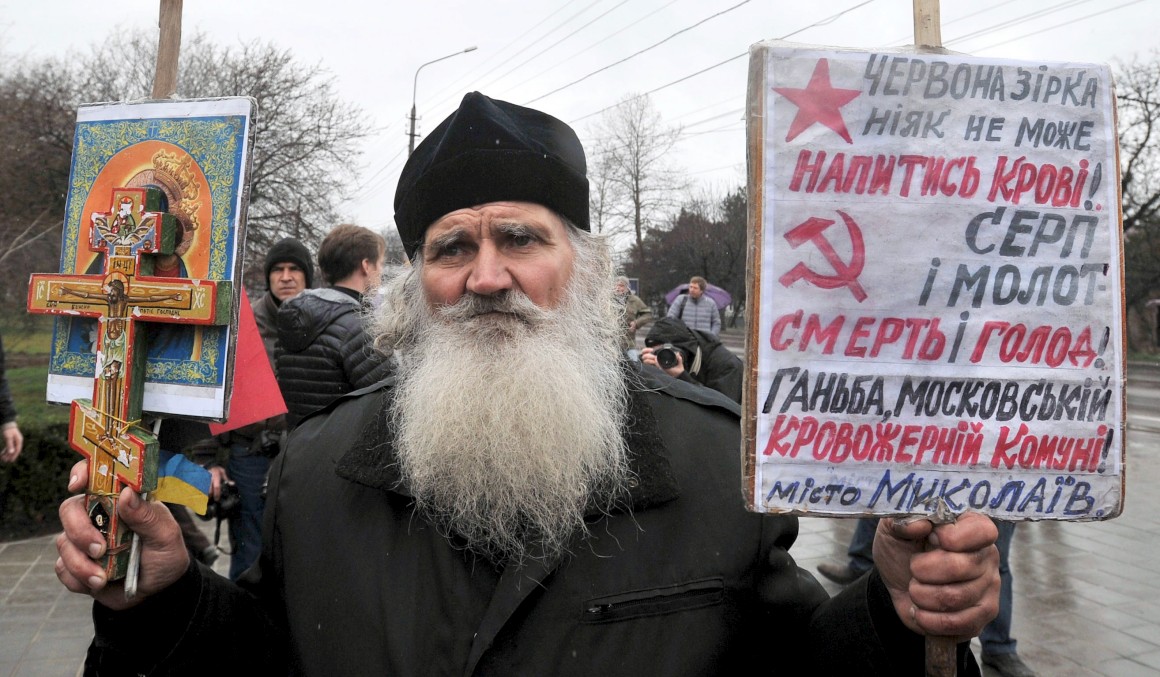 Ultimately, it is the people of Europe, -- not the diplomats from Europe, -- who will stop Putin, because faith and nationalism are stronger than Soviet (and post-Soviet) hordes.

If you want to be on this right wing, monarchy, paleolibertarianism and nationalism ping list, but are not, please let me know. If you are on it and want to be off, also let me know. This ping list is not used for Catholic-Protestant debates.

That being said, I’ve got no interest in a war, nuclear or otherwise.

Paris is next. Why not?

Actually, the NATO as an institution might, despite the weakness of their political leadership. Ultimately, nations win over barbarity, as they force their institutions into action.

Then Paris is next. Why not?

Yeah, France has nukes. So what?

Sorry. The WH is closed due to the “lyin’ king” being in the Keys this weekend. Try back next week.

Has nothing to do with Paris. Kiev, maybe. But most likely, Putin’s current objectives are realistically scaled to just annexation of Crimea. Which, had he been a civilized man, he could have negotiated without military action.

When you disarm then the war is never yours to decide.

The answer is to directly bomb Russia out of the Crimea. They don’t want nuclear war either, so they would lose and Putin would be so weakened he’d be gone in months.

In 1938, Hitler’s own generals were ready to take him down but he was saved for bigger things by the pusilanimity of Chamberlain, which you echo.

There is no Churchill around that I know of.

Yeah? Warsaw, Prague, Berlin, Paris, London. Why not? You didn’t answer that.

Why should he get Crimea?

Putin will only be stopped when he overextends himself and he tries to go someplace that he is not wanted. Comparing Putin to Hitler thus far is historically flawed. Hitler invaded and attempted to dominate and seize countries where he was not wanted. He also attempted to liquidate entire populations. Putin thus far has confined his “aggression” to area that have been traditionally Russian and thus far it has been bloodless.

The Lord will stop Putin when Putin, et al make their move on Israel.....and he won’t be stopped before then....which leads me to believe that it isn’t too far off.

That might be a good thing. Last time Churchill was involved in geopolitics, Poland was sold off to Stalin. We are still dismantling the legacy of the WWII trio.

Because Crimea is historically a part of the Russian Empire, populated by ethnic Russians. Crimea was gifted — like one can gift cattle — to the Ukrainian Soviet Socialist Republic in 1954 by Khruschev in celebration of defeating Ukrainian nationalist movement.

That Putin wants Crimea is understandable. That he chose military invasion is because of the kind of man he is.

Would you buy land anywhere along the Russian frontier?

Funny how many Russian words transliterate straight to English.