Hey MSM, if you ever get tired of trying to grind
Herman Cain into hamburger, maybe you
can take a look at some of this stuff, then- 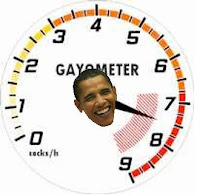 The lurid tales have been circulating for three years now, ever since Hillary Clinton's people began hearing whispers from the Chicago street re. Barack Obama's warehouse full of scary skeletons. Meanwhile, a thoroughly compromised Obammunist media were happy to ignore the Democratic rising star's secret past-- up to and including possible crimes committed in order to bury it all.

But besides deep involvement with terrorists and slimy mafiosos, Hillary 2008 staffers repeatedly heard talk that Barack Obama was well-known in the city's alternative lifestyle circles to be a closeted homosexual, married (otherwise inexplicably) to a charmless tree of a woman as a political/social front.

Far fetched? If you know anything about the harsh contempt most black Americans feel towards the gay community, you'll see this scenario as more likely than not- that is, if you genuinely consider the (circumstantial) evidence that's been accumulating.

Of course, being gay is not a crime in itself... it's when you start snuffing out people who know too much about your secret sex life, that's where we run into problems...

Last year if you'll recall, the mother of Jeremiah Wright's  (dead, gay) choir director went public with her belief that son Donald Young was murdered on the eve of Democratic primary season to cover up a past sexual relationship with Obama. 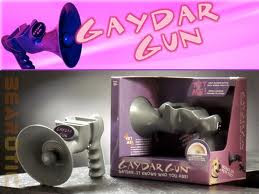 Although the MSM have still yet to notice the vast plume of smoke emanating from Chicago's gay bathhouse circuit, thinking people know there must have been some serious flaming going-on somewhere. Alas, when this fraudulent scam of a president is at long last exposed for who and what he really is... it's going to make the Great Chicago Fire look a weenie roast.

The ... murder of Donald Young, a 47-year-old choir master at former Rev. Jeremiah Wright’s Trinity United Church of Christ—the same congregation that Obama has attended for the past 20 years.
Two other young black men that attended the same church—Larry Bland and Nate Spencer—were also murdered execution style with bullets to the backs of their heads—all within 40 days of each other, beginning in November 2007. All three were openly homosexual.
What links this story to Barack Obama is that, according to an acquaintance of Obama, Larry Sinclair, Obama is a closet bisexual with whom he had sexual and drug-related encounters in November 1999.
Further, Sinclair claims that Obama was friendly with at least two of these deceased parishioners, and that choir director Donald had contacted him shortly before being murdered from multiple gunshot wounds on December 23, 2007.
....According to Sinclair in an affidavit to the Chicago Police Department, Donald Young had informed him that he and Barack Obama were “intimate” with each other.
Sinclair, it should be noted, declared on a January 18, 2008, YouTube video that on two separate occasions in November 1999, he engaged in sexual acts with Obama, and that Obama smoked crack cocaine—once in a limousine and the other time at a hotel in Gurnee, Ill.
Larry Sinclair has also asked: why would Young—whom he had never met—initiate these calls by contacting him on cell phone numbers known only in the Obama camp?
Further, a private investigator connected to the Chicago Police Department told the Globe, “Donald Young was silenced because of something he knew about Obama. Donald was in a position where he heard a lot of things and saw a lot of things concerning Barack.”
.....
Are three murders within the span of 40 days among members of America’s most discussed church—one run by the controversial Rev. Jeremiah Wright—enough to arouse the suspicions of Chicago law enforcement officials and members of the national media?
_______________________________________________________________________________
And plenty more smoke where that came from... 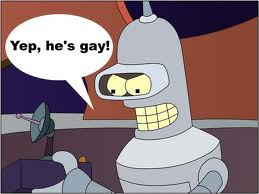 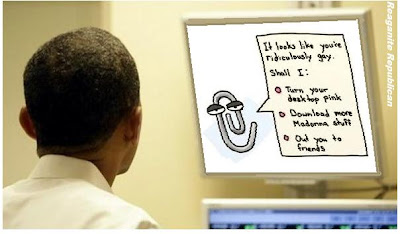 Hey, isn't Richard Simmons from ChiTown...?
Put his butt on the stand, I'll bet that little yenta
knows everything... maybe even first-hand lol.
And where the hell are Barack Obama's former girlfriends?

NOT ONE out there that would like to put all this

Why didn’t Hillary use any of this? It’s not like the Clintons are bashful.

Too much pot calling the kettle black, perhaps? What dirt did Obama have on Hillary?

Because the Powers that be in the Democratic party woud have destroyed the Clintons if they used it.

Even if obama is outed as hopelessly homosexual, it’s not a crime. Crack cocaine is, both buying and using. And most especially having anything to do with murdering your boy toys is.

7 posted on 11/15/2011 5:54:11 AM PST by mmichaels1970
[ Post Reply | Private Reply | To 1 | View Replies]
To: Reaganite Republican
Two other young black men that attended the same church—Larry Bland and Nate Spencer—were also murdered execution style with bullets to the backs of their heads—all within 40 days of each other, beginning in November 2007.

The problem is that this is not true...neither of these guys was murdered execution style, one died of a long illness (likely AIDS).

Keep posting crap like this though, a handful of freepers will believe anything and you get to destroy FR credibility in the bargain...is that your goal?

Yeah but Herman Cain and answering that question about Libya. way worse

Thanks, that’s why I get my news on Freerepublic.

Debunkers and debunker’s debunkers. Bad info gets rooted out here.

Nope, but I do share your concerns- and value my credibility.

Thus, I linked the source...

“What dirt did Obama have on Hillary?”

Maybe he threatened to publicize her lesbian relationship with Huma Abedim (a.k.a.: Anthony Weiner’s wife).

It came out briefly, but was not carried by any major news media. Why would they? It is only wrong if a Republican engages in such stuff.

LMAO That photo-shop looks more natural than it did originally.

No peace without justice for Donald Young! Obama can put that in his crack pipe and smoke it.

I guess the rest of the gays from that church will have to be careful as to not be so “open”.