I have to admit, I was not a big Glenn Beck fan to begin with, but in the end he was the only one that really put it all on the line to speak the truth.

I don't care what anyone says, he was run out of FOX because he was exposing the truth about the international socialist and extremist plot to destroy America.

Murdoch recently sold a large chunk of his operations to the Saudis who are nothing more than puppets of the Russian and Chinese governments. (Include us in that discussion)

FOX will not take over where Glenn left off, they will talk about bs stories that have no relevance to the dire times that we face.

Once in a while they will yell at a lib for credibility purposes, but isn't it interesting that no other host ever mentioned Glenn's material or stated the basic fact, that none of his statements were ever challenged by the current administration and no law suits filed.

For those who refuse to believe this, all I will say is enjoy the fluff while you can, but your in for a big surprise, the same one Glenn has been bold enough to come on a daily basis to warn you about in order for you to prepare your family and friends for this inevitable crisis which the enemy is just waiting to unleash on this nation.

FOX NEWS is dead. For those who disagree, go enjoy your fair and balanced, but to me facts are facts and they stand alone while anything else is just SPIN.

Fox News exists to sell soap to your women folk.

Don’t ever let that fact slip from foremost in your thoughts when subjecting yourself to their transmissions.

Roger Ailes and Donald Trump deserve each other.

Right. Except Beck’s not leaving Fox.

Did you get so excited when Lefty Beck was campaigning for a VAT tax or trashing J.D. Hayworth for John McCain?

Since Beck hasn’t left FOX, I don’t know what you are talking about. 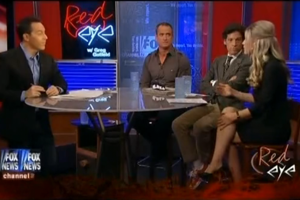 Ok he is doing some work on the side, brilliant observation....

I have read as much to suggest that Beck is making this move on his own initiative, as to suggest that he is being forced out. He already has planned new ventures, to include his own TV network. That tells me he is moving of his own free will after a long planning and preparation period. And Murdock surely wouldn’t want to give up the revenue that Beck brings in.

Yes you don’t know what you are talking about I agree finally a person who speaks the truth.

Beck has thrown everything he has at Obama but still has not taken him down so he is changing his style of attack.

This story says Beck is leaving cause he wants something different!!!

You are right. Beck is really disorganized. In his thoughts and endeavors. Great point.

“I don’t care what anyone says, he was run out of FOX because he was exposing the truth about the international socialist and extremist plot to destroy America.”

If what you are saying is true, I will block Fox News on my TV just like I have blocked MSNBC.

But, I haven’t seen anything yet that indicates this is what happened. I have been noticing some subtle changes in Fox in recent weeks. If they keep it up and if they did stop Beck’s program...pooof!! They just destroyed their network.

People aren’t as stupid as the arrogant news media or this corrupt Administration thinks we are...of course, this doesn’t include the leftist liberals. The socialists in this country are pretty stupid.

Anyway, let’s give this some time to clear the fog of confusion and see what transpires. Then, we can make our decisions as to what happened to Beck’s show.

He is being forced out because he is hitting the enemy right between the eyes. Beck knew his time would end because of that. When he goes out on his own or does a few shows for FOX it will not have nearly the impact his 5pm spot had.

I applaud him for his bravery and the classy way he is leaving FOX.

Beck is a kook, the Art Bell of politics... But as his many followers here on Free Republic prove, he can draw an Audience.

There is no grand conspiracy, Beck is launching out on his own, while developing future shows for Fox.

Fox wouldn’t push him out knowing his star was bringing in wads o cash for them, it’s foolish to think that.

Your the KOOK my friend.

You make blanket statements give me one thing he has said that is not true?

Right out of the liberal playbook.