The True Story of Sequestration In Handy GIF Form

But how did our lawmakers get us to this point?

It all started back in 2010 when the Tea Party swept into the House of Representatives. They argued that the stimulus measures –  taken by the Obama administration to lessen the depth of the recession – created too much debt. To reduce this debt they were going to slash government spending...

Now, every so often Congress authorizes how much money the government can borrow. This is called the debt ceiling. Tea partiers rightly claimed that the debt ceiling was too damn high.

"The Debt Ceiling is Too Damn High!"

So they tried to use the debt ceiling as leverage to shrink government services and cut programs like Social Security, Medicare and Medicaid.

After the left took the U.S. economy to the brink of default, the right wing agreed to raise the debt ceiling, but only if they were guaranteed some sort of massive spending cuts.

And thus the sequester was born.

The sequester was supposed to be so painful that Congress would have to come up with a plan. It was acclaimed by both Democrats and Republicans as a victory of bipartisanship.

So Congress formed a "Super Committee" to pass a “Grand Bargain” that would reduce the deficit by the same amount as the sequester, but with a more balanced mix of cuts and increased revenue.

Because the Tea Party held the line, and the Democrats refused to back down from their big government agenda, the Super Committee was not able to agree on a plan. The Tea Party refused to even consider raising any taxes or take from the rich to give to the poor. They believed the best thing to solve the debt problem, was to cut, cut, cut. So the can was kicked down the road until after the election.

Time passed. Obama got re-elected and most of America was like this:

The people who voted for the other guy were like this:

Immediately following the election there were two deadlines. The Bush tax cuts were going to expire, raising taxes on most Americans in the middle of a weak economy. At the same time, sequestration was going to kick in, slashing spending indiscriminately. This combination of tax hikes on the middle class and devastating spending cuts was known as the FISCAL CLIFF.

At least the scenery is nice.

Instead of jumping off the fiscal cliff, President Obama and Speaker of the House John Boehner decided it was time for a grand bargain. They would compromise by raising revenue and cutting spending at the same time. Thanks to caving from Progressive Republicans, the grand bargain ended up something like this:

Ultimately, Obama preserved tax cuts for working people but forced the right to raise taxes on many wealthy Americans. The right wasn't happy about it, but some of them voted for it anyway.

Side note: although Obama is taking more money from wealthy Americans, many millionaires and billionaires still ignorantly support him.

After obstructing yet another compromise, Republicans decided the sequester was still a good idea. They would try to use it to force cuts to vital programs. The sequester was postponed until March 1.  Meanwhile, we see the wolves dine with each other, deciding on what to eat for lunch.

Now March 1 is upon us. So the sequester is about to kick in. Obama is traveling the country, claiming the sky is going to fall.

Obama & Co. claim that by letting the automatic spending cuts go into effect the whole of government will be shut down, people will lose jobs everywhere, food will be scarce, police and fire fighters won't be able to protect citizens, medical services will be eviscerated...basically everything that makes the world go around, will come to a halt.

Yeah, it's that messed up.

The sequester will eliminate jobs, but they'll be UNION and government jobs.  It's a start in cutting back this over-grown and out-of-control, government.

Meanwhile Obama keeps going on vacation after vacation, on the taxpayer dime.

Partying on some yacht.

The Budget Control Act of 2011 - which President Obama signed - allowed the U.S. to keep paying its bills, like the U.S is some kind of adult or something. It also carried a ticking time bomb: big built-in federal spending cuts that would take effect by "sequestration" if Congress couldn't come up with a budget agreement on its own.

The blame goes to: Democrats, for thinking Congress could reach an agreement.

Who on earth would come up with this terrifying "sequester" plan in the first place? President Obama has said the House Republicans did it. Republicans have said the White House did it.

The blame goes to: The sequester really was Team Obama's idea, but Republicans agreed to it initially. So blame everyone!

Barack Obama signed a tax bill in January that delayed the sequester until March.

The blame goes to: The can, for not going farther down the road when it was kicked. Journalist Bob Woodward called President Obama a Lying McLiarpants saying the White House came up with the sequester idea, has "moved the goal posts" in negotiations with Republicans, and is making unnecessary national security decisions in response to the looming budget cuts.  And now the WH is threatening him.

The blame goes to: Obama.  He should know not to tangle with the reporter who brought down Nixon.

Emboldened by Woodward's attack on Obama, Republicans doubled down, saying that none of this would have ever happened if the president weren't so stubborn (and if his wife didn't have such stupid bangs).

The blame goes to: Michelle Obama. Her desperate need to feel and act like an Empress is costing tax payers way too much money. 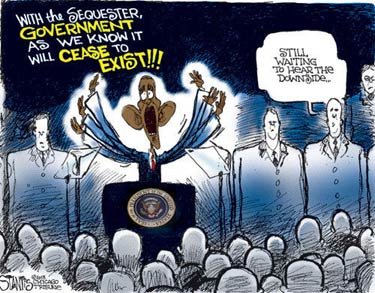 A father put his 3 year old daughter to bed, told her a story and listened to her prayers which she ended by saying:

The father asked, ‘Why did you say goodbye Grandpa?’

The little girl said, ‘I don’t know daddy, it just seemed like the thing to do.’

The next day grandpa died.

The father thought it was a strange coincidence. A few months later the father put the girl to bed and listened to her prayers which went like this:

‘Holy s***!’ thought the father, “this kid is in contact with the other side.”

Several weeks later when the girl was going to bed the dad heard her say:

He practically went into shock. He couldn’t sleep all night and got up at the crack of dawn to go to his office. He was nervous as a cat all day, had lunch and watched the clock.

He figured if he could get by until midnight he would be okay. He felt safe in the office, so instead of going home at the end of the day he stayed there, drinking coffee, looking at his watch and jumping at every sound.

Finally, midnight arrived; he breathed a sigh of relief and went home. When he got home his wife said ‘I’ve never seen you work so late, what’s the matter?’ He said ‘ I don’t want to talk about it; I’ve just spent the worst day of my life.’

She said, ‘You think you had a bad day, you’ll never believe what happened to me. This morning my golf pro dropped dead right in the middle of my lesson!”

great job putting that together...

In the meantime, I see that MO eats with her elbows on the table.... why am I NOT surprised!!??

Thanks for the laugh!

However, I DID have to do some editing and correcting, as that site is obviously a left wing libtard site. ;)

13 posted on 03/01/2013 5:03:10 AM PST by Lucky9teen (Peace is that brief glorious moment in history when everybody stands around reloading.~Thomas Jeffer)
[ Post Reply | Private Reply | To 9 | View Replies]
To: Lucky9teen
SEQUESTER...WHO GETS THE BLAME? 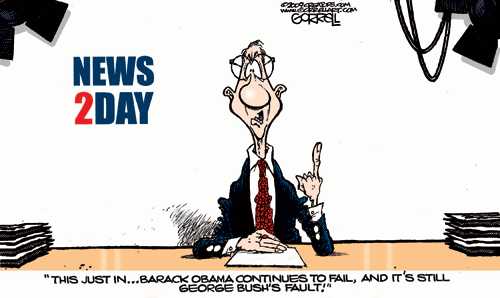 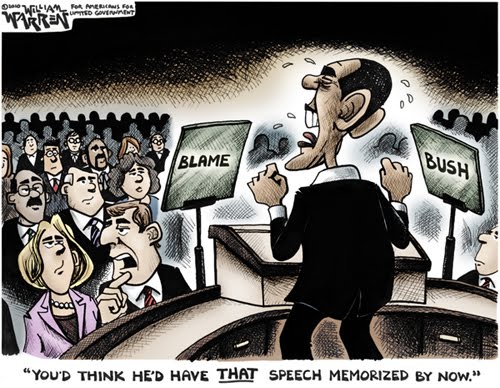 That is the best ‘illustrated’ short history of recent events.

A firefighter was working on the engine outside the Station, when he noticed a little girl nearby in a little red wagon with little ladders hung off the sides and a garden hose tightly coiled in the middle.

The girl was wearing a firefighter’s helmet.

The wagon was being pulled by her dog and her cat. The firefighter walked over to take a closer look.
‘That sure is a nice fire truck,’ the firefighter said with admiration.

‘Thanks,’ the girl replied.
The firefighter looked a little closer. The girl had tied the wagon to her dog’s collar and to the cat’s testicles.

‘Little partner,’ the firefighter said, ‘I don’t want to tell you how to run your rig, but if you were to tie that
rope around the cat’s collar, I think you could go faster. ‘
The little girl replied thoughtfully, ‘You’re probably right, but then I wouldn’t have a siren.’