What REALLY irked Adolf Hitler about Ike: No, not the fact that Eisenhower was Supreme Commander
daily mail ^ | 9/11/2019 | dominic lawson

"This bizarrely conflicted view was even more pronounced in Hitler’s attitude towards the U.S. In World War I, Corporal Hitler had been given two captured American soldiers to escort back to his brigade HQ and he was appalled by the fact that the pair were of German descent.

From that moment on, Hitler was transfixed by the notion that the best of Germans had emigrated to the U.S. (attracted by the potential for self-realisation in its vastness) and that Germany should prove itself to be a mighty state that would persuade its ‘children’ to return.

Hitler would constantly complain that ‘American soil had been fertilised by Germans’ and that his historical mission was to reverse that process.

Simms points out: ‘In the late 1930s, he briefly experimented with a really quite grotesque plan for an international “exchange” of German-Americans for German Jews.’

As Simms writes: ‘The Fuhrer was aware that the supreme command of the Allied Expeditionary Force had been given to Dwight Eisenhower, descended from the Eisenhauers . . . who left the Saarland for Pennsylvania.’

It is true. But still less than the combined emigration from the British Isles as Scotland and Ireland emigration is counted separately from England and Wales.

101 posted on 09/12/2019 8:04:12 PM PDT by Vigilanteman (The politicized state destroys aspects of civil society, human kindness and private charity.)
[ Post Reply | Private Reply | To 9 | View Replies]
To: BroJoeK
Okay, please allow me to fill you in on the factual history of this assassination.......

First of all, Gavrilo Princip and his band of Nietzsche loving Nihilists louts were used by THE BLACK HAND ( no, not the Italian Mafia...go look it up! ), those who were unhappy belonging to the Austro-Hungarian Empire, and yes....RUSSIA, to murder Franz Ferdinand and Sophie. And IF their driver hadn't made a wrong turn, they NEVER would have been shot that day!

Russian was all for the Bosnians and Serbs breaking away, so that perhaps Russia could take them over, or, at the l;east, cause some havoc. So they helped push the assassination, paid for some of the guns and bullets, and DID meddle in this whole thing; before, during, and afterwards!

The Emperor Franz Joseph, demanded an apology! One would have prevented WW I; at least at that time!

In order to get one, the old man asked Kaiser Wilhelm to handle it for him, as he was not only old, by emotionally distraught. Willie obliged and sought the apology, not once, but over and over again, but was rebuffed and NOT politely! And so WW I began!

Okay, yes, the above is not only a Cliff's notes version and waaaaaaaaaaaaay dumbed down, but IF you are truly interested in this topic, I'll give you some book titles to help you out.

102 posted on 09/12/2019 8:10:23 PM PDT by nopardons
[ Post Reply | Private Reply | To 98 | View Replies]
To: Leaning Right
MacArthur boasted that he lost fewer men winning the Pacific War than Eisenhower did establishing Anzio Beachhead. Mark Clark was the awful general in that operation who was said to have had little regard for the lives of his men.

MacArthur did an even better job as Governor General of Japan after the war. He turned a conquered nation into a staunch ally.

Ah, but would that statement have been true if there had been no atomic bomb? Invading mainland Japan would have been a nasty business.

So I think MacArther just got lucky there.

By the way, I agree with you that MacArther did a fine job administering Japan after the war. A more vengeful administrator might have made the Japanese sullen and resentful, like Germans were after WW I.

Russian backed Serbs murdered the heir to the throne of Austria-Hungary.

Once millions of men began moving all across the continent war became for practical purposes inevitable.

Who first declared war is moot.

The railroad time tables dictated the course of events.
Failure to mobilize in time meant defeat for the dilatory power.

George F. Kennan held France and her desire for revenge on Germany to be the power most responsible for setting in motion the events leading to WWI.

The Kaiser was probably the single individual most responsible for upsetting the delicate diplomatic structures Bismarck had created to maintain the balance of power on the continent and for pursuing a naval arms race with Britain which Germany could not win but that led England to abandon neutrality in search of security.

Lots of Germans in southern Illinois. My grandfather owned a farm down there over by Ridgeway.

Hitler hated the Prussians, and all the Generals with the “vons” in their names.

Some speculate that once Germany won the war, Hitler would have purged them all, like the Jews, once their services were no longer needed.

IQ. Means nothing. Funny how some people I know at UC Berkeley who pretend to have high IQ’s (above a fictional level of, well, 140) cannot understand how Jesus rose from the dead and conclude that people should not accept that Jesus rose from the dead. Another case of IQ getting the way: Wernher von Braun was brilliant at making one stage rocket and was confused about making three stage rocket. What’s the big deal? Who knows. Everyone has gifts, talents and blind spots.

Other than possibly Field Marshal Rommel, Hitler was left with the inferior Germans. :)

Actually the most “brilliant” person Hitler had was mostly Polish, Otto Skorzeny.

He actually worked for The Mossad for a bit, after the war. Fascinating character.

I know the history. The apologists for Germany around here make my eyes roll.

113 posted on 09/13/2019 1:13:37 AM PDT by SoCal Pubbie (Ca)
[ Post Reply | Private Reply | To 105 | View Replies]
To: max americana
Really interesting article and comments.
In case anyone hasn't read the original Daily Mail piece, I think this bit is worth repeating:
"The theme of [this new book] Hitler: Only The World Was Enough is that the founder of the National Socialist Party — the clue is in the name — saw international capitalism as the main enemy of the German people and, indeed, of the world as a whole.
This was completely congruent with Hitler’s paranoiac anti-Semitism, as he saw the Jews as the eternal string-pullers of international finance, dedicated to their own enrichment...

IOW Hitler saw himself as a Socialist.

I've read that the SS actually investigated Hitler's own possible Jewish ancestry, twice, by order of Himmler, who kept the files in his own private archive.

Above is a link to an old FR post about the New Deal. A long booklet written in 1938 by Garet Garrett.

“Worse outwitted were those who kept trying to make sense of the New Deal from the point of view of all that was implicit in the American scheme, charging it therefore with contradiction, fallacy, economic ignorance, and general incompetence to govern.

But it could not be so embarrassed and all that line was wasted, because, in the first place, it never intended to make that kind of sense, and secondly, it took off from nothing that was implicit in the American scheme. It took off from a revolutionary base. The design was European. Regarded from the point of view of revolutionary technic it made perfect sense. Its meaning was revolutionary and it had no other. For what it meant to do it was from the beginning consistent in principle, resourceful, intelligent, masterly in workmanship, and it made not one mistake.

The test came in the first one hundred days.”

I wonder at that. People of Irish descent have been in America from way back.

Years ago German scholars established that what you posted here is pure fantasy.
The actual sequence of events is well recorded here:
Europe's Last Summer: Who Started the Great War in 1914? 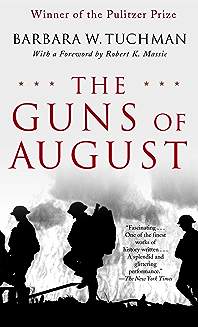 Tuchman leaves blank the period from assassination to declaration of war.
That's the period Fromkin fills in.

As for your supposed Russian support for Serbia's Black Hand and Russia allegedly pushing those young men to assassinate the Austrian Arch Duke:

"Those involved probably realized that their plot would result in war between Austria and Serbia, and had every reason to expect that Russia would side with Serbia.
They likely did not, however, anticipate that the assassination would start a chain of events leading to World War I.
Others in the government and some of the Black Hand Executive Council were not as confident of Russian aid.
Russia had let them down recently."

nopardons: "Russian was all for the Bosnians and Serbs breaking away, so that perhaps Russia could take them over, or, at the l;east, cause some havoc.
So they helped push the assassination, paid for some of the guns and bullets, and DID meddle in this whole thing; before, during, and afterwards! "

I've seen nothing suggesting any Russians, much less the Tsar's government, even knew of Princip's plan.
Indeed, the role of Apis himself is not even fully established.

"The decision to kill the Archduke was apparently initiated by Apis, and not sanctioned by the full [Black Hand] Executive Committee (assuming Apis was involved at all, a question that remains in dispute[18]). "

nopardons: "The Emperor Franz Joseph, demanded an apology! One would have prevented WW I; at least at that time! "

Sorry, but you are terribly confused.
In fact, the Kaiser's High Command pushed & pushed reluctant Austrians to issue Serbia an ultimatum and then to refuse to accept Serbia's submission on all but one point, then pushed Austria to declare war on Serbia.

“Smiling Albert” Was originally sentenced to death after the war. He was convicted of ordering the murder of 355 Italian civilians. He was a war criminal.

“My favorite historical topic is the Second World War. The permutations and probabilities of this horrific and titanic, never before or since eclipsed struggle beggar belief, and are both endlessly fascinating and horrifying.”

On another FR thread I have promoted a podcast I record about Southeast Asian history. Most of last year’s episodes were about World War II in and around Southeast Asia, and now I am working on the Vietnam War. If you listen to podcasts, check it out.