Bill Clinton is back where he wants to be -- in the news; no doubt intent on developing a post-presidential image as one who is a far-sighted, wise First Citizen. This Tuesday, he took it upon himself to dispense advice to his party at the annual meeting of the Democratic Leadership Conference.

Clinton told the DLC that his party had a "heavy responsibility to cooperate in uniting this country on security issues." Certainly, any desire that Democrats have to display true bi-partisanship by working with President Bush on improving our national security must be welcomed at 1600 Pennsylvania Avenue, but I think we must see it occur before we can really believe it to be a sincere sentiment. Just think about how the Senate Democrats were willing to tie up the legislation establishing the Department of Homeland Security because they did not want to grant President Bush and the Administration flexibility in terms of administrative matters. The Democrats did this simply to please the unions representing government workers. It does not follow that what is good for the Democrat Party's coffers is good for our national defense.

There's a whole side to the Clinton legacy on national defense that should not be forgotten, and I am not talking about his disgraceful effort to avoid serving his country in uniform during the Vietnam War. That is well-known and makes many military veterans turn red with anger whenever they think that someone like him was ordering American troops into conflicts to brave the bullets that he once tried so hard to avoid having to face. Clinton demonstrated that their distrust and anger was well-placed by his actions in office. Not only did he demonstrate his lack of character; he also demonstrated his lack of concern about our nation's armed forces. His short-changing our national security represents his legacy too.

Recall, if you will, how Clinton's constant travels that took a big chunk out of the Pentagon's budget?

Thanks to the work of the Senate Republican Policy Committee, the actual tab of Bill Clinton's globetrotting is not just buried away in government reports and microfilm boxes of old newspapers, and on tapes of old TV newscasts. It's all there in an easily readable form on the SRPC's website.

In March 2000, the President, with Chelsea and his mother-in-law, took a trip to Bangladesh, India, Pakistan, Oman, and Switzerland. The SRPC noted that both ABC News' World News Tonight and the Air Force Times estimated the cost of the trip at $50 million, a record for the cost of an overseas trip by a president. Used on the trip were 14 C-17 Globemaster IIIs, 12 C-5 Galaxys, 3 C-141 Starlifters, and 2 C-130 Hercules. A large number of other Air Force planes were to deploy.

"Ninety percent of the costs [cited by the World News Tonight anchor at $50 million] are for airplanes, drawn from an Air Force that is already stressed meeting military and humanitarian commitments overseas. When a President travels, all the public ever sees is Air Force One, but consider this: Seventy-seven other Air Force planes are being used on this one trip, including 26 of the biggest transports, C-5s and C-17s."

"Military sources say that represents more than one-third of the Air Force's entire inventory of these planes that are ready to fly on any given day."

When the President took trips in 1998 to Chile, China, and Africa, the tab came to $72 million. Over sixty million came from the defense budget.

One could argue that Bill Clinton's trips were related to official business. But it appears that what he really wanted to do was to take his own taxpayer-funded Cook's World Tour at the expense of the Pentagon budget. Clinton press secretary Joe Lockhart said at a White House press briefing on October 19, 1999 that his boss had yet to visit Panama, then added: "There are a few places still left on the list he hasn't been, and we have 15 months to rectify that." If the defense budget was not so parched back then, then Bill Clinton's trips might not be an issue.

But people forget that we nearly ran out of smart bombs in Kosovo. The money that Bill Clinton took from the defense budget for his 1998 trips to Chile, China, and Africa could have purchased 3,000 smart bombs.

Senator Jim Inhofe (R-OK) is as strong an advocate for military readiness as he is a tough critic of the Clinton legacy of negligence on national security. A simple chart that he uses shows the true Clinton legacy. If defense spending had kept pace with inflation during his years in office, the budget would have reached well over $300 billion during FY 2001. Instead, the defense budget in real spending dollars during his years in office falls consistently below the budget level of approximately $270 billion (measured in real spending dollars) that he inherited in 1993. Bill was a consistent opponent of missile defense, and did nothing of consequence when weapons inspectors were ejected by Iraq, or to prevent missile and weapons technology transfers by Red China to such bad-boy nations as North Korea, Iran, and Iraq.

And it may take some effort by Americans to recall that it was President Clinton who told the nation in a televised address in August 1998 that we needed to take on the bin Laden terrorist network. He ordered strikes against terrorist-related facilities after attacks on U.S. embassies.

"We will not yield to this threat," he proclaimed. But coming at the height of the controversy over Monica Lewinsky, the news media thought his actions resembled the scripting of the movie "Wag the Dog," staging military action to deflect attention from his personal problems at home. In retrospect, they were right because Bill's record on confronting terrorism -- or rather, his lack of one -- since that address, makes one wonder just how sincere and comprehending he was about the true threat of terrorism. Don't forget the attack on the USS Cole occurred two years after that address. Bill fired back words at our enemy, but failed to back up his talk with the only thing they would respect: real force. Perhaps Bill just lacked the "strength, courage, and endurance" to take real, hard-hitting action against our enemy. Those were the very qualities that Clinton said would be needed for our country to prevail over al-Qaeda.

Bill Clinton is pinning his hopes on Americans having incomplete memories. He wants us to remember the good times, associating the prosperity of the late 1990s with the handiwork of his Administration. However, the farther we move away from the days that Bill, Hillary and the whole gang of Clintonistas were in the White House, the more apparent the glaring deficiencies in his record become, particularly on national security.

It would be nice to think that Bill Clinton has finally come to recognize the true importance of national defense. But the question remains: Why was he AWOL so often on issues involving national defense during his presidency? Maybe it's because he was so busy taking trips at the expense of our armed forces when not fighting to save his own skin from an enraged Congress during his scandal-ridden presidency.

TOWNHALL.com: "CLINTON SCANDALS CONTINUE TO SURFACE" -Column by Phyllis Schlafly (COLUMN SNIPPET: "...The GAO discovered that those pilots departed because the Clinton administration ordered them to receive the anthrax vaccine, and 86 percent of those who did take the shots reported adverse side effects. Now, after scores of resignations and hundreds of careers destroyed by court-martial, we discover that our brave servicemen and women were right to resist the anthrax orders, and the government was fatally and corruptly wrong. A lawsuit filed by two Connecticut Air Force Reserve pilots asserted that the vaccine used on the military was never properly tested, and the Food and Drug Administration's recent response was to halt use of existing stocks of the vaccine...") (110502) 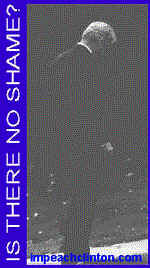 Your animation and archive capture perfectly the rapist's evilness and demagoguery and cowardice and failure.

Move on; get over it. Don't you know what's important today is what Lott said about what Strom did 50+ years ago. Get with the program! < /sarcasm>