North Korea is taking the first steps towards a new era
after five decades of hostility, with a visit by US
Secretary of State Madeleine Albright. 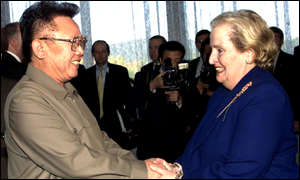 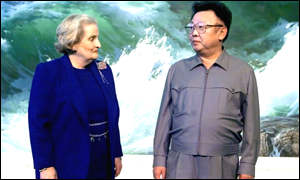 But the two looked tense during the official photocall 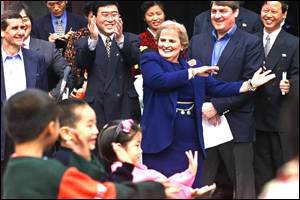 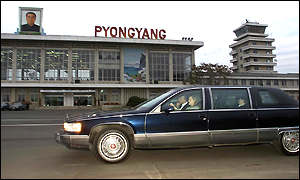 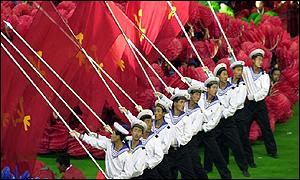 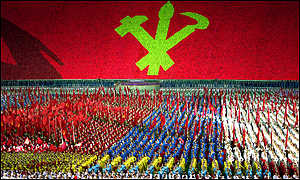 Thousands of dancers celebrated the US secretary of state's visit 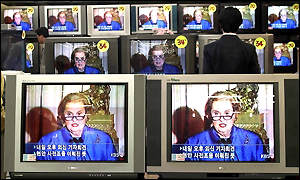 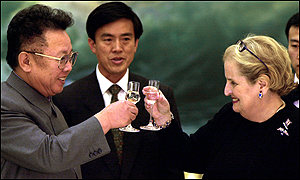 The reported willingness of the North Korean leader, Kim Jong-il, to restrain his country's long-range missile programme would be another step in meeting the worries of the United States and other western states.

The American Secretary of State, Madeleine Albright, said after her unprecedented talks with Mr Kim in Pyongyang that she took his remarks as showing a serious desire to resolve a range of issues relating to missiles.

On the face of it, there has been a dramatic turnaround.

As the first official trip to Pyongyang of a high-ranking U.S. official, U.S. Secretary of State Madeleine Albright set foot on Pyongyang on the early morning of October 23.

This suffices to indicate that long-standing hostilities between the DPRK and the U.S. started to be melted into a friendly relation

3 posted on 10/20/2002 10:52:59 AM PDT by McGruff
[ Post Reply | Private Reply | To 2 | View Replies]
To: McGruff
God, how the world laughed at the USA during the Clinton years. Time after time, Clinton would perform outrageous diplomatic blunders, clearly againt US interests, while our enemies smirked and feigned cordial accord. Remember the African Apology Tour, the endless stumping for the Nobel Peace Prize and appeasements of alQueda? We were the laughing stock in the nineties.

So when I hear from friends on the left that the USA is now the worrisome target of universal hand wringing and finger wagging for GWB's "cowboy" tactics, I can only stifle a giggle. I prefer a cowboy to an immature clown.

For U.S. leaders, North Korea had long been a forbidden land. No high-ranking U.S. official had ever set foot there. Last week Secretary of State Madeleine Albright paid a historic two-day visit to the country. She met with its leader, Kim Jong Il, and attended a huge rally.

The U.S. has seen North Korea as an enemy for 50 years. In 1950 North Korea invaded South Korea. U.S. soldiers helped South Korea fight the invasion. Today North Korea is a poor country. But it has the world’s fourth largest army. The U.S. wants North Korea to stop making missiles that can go long distances. Kim told Albright he would work to change the missile program.

Will relations between the two countries improve? The ball is now in Kim’s court

-The Atomic Genie- what we know about North Korea's Nuclear program--

And, she believed him?

Is she really a US official, or is she just our official glittering jewel of colossal ignorance?