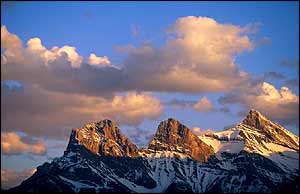 The influence of clouds on climate change is poorly understood

German scientists have found a significant piece of evidence linking cosmic rays to climate change. They have detected charged particle clusters in the lower atmosphere that were probably caused by the space radiation.

They say the clusters can lead to the condensed nuclei which form into dense clouds.

Clouds play a major, but as yet not fully understood, role in the dynamics of the climate, with some types acting to cool the planet and others warming it up.

The amount of cosmic rays reaching Earth is largely controlled by the Sun, and many solar scientists believe the star's indirect influence on Earth's global climate has been underestimated.

Some think a significant part of the global warming recorded in 20th Century may in fact have its origin in changes in solar activity - not just in the increase in fossil-fuel-produced greenhouse gases.

The German team, from the Max Planck Institute of Nuclear Physics in Heidelberg, used a large ion mass spectrometer mounted on an aircraft.

Cosmic rays and clouds The Sun's magnetic field and solar wind shield the Solar System from cosmic rays (very energetic particles and radiation from outer space) Changes in solar activity will affect the performance of the shield and how many cosmic rays get through to Earth Theory suggests cosmic rays can "seed" clouds Some satellite data have shown a close match between the amount of cloud over Earth and the changing flux in cosmic rays reaching the planet They say their measurements "have for the first time detected in the upper troposphere large positive ions with mass numbers up to 2500".

They conclude: "Our observations provide strong evidence for the ion-mediated formation and growth of aerosol particles in the upper troposphere."

The scientists report their findings in Geophysical Research Letters, a journal of the American Geophysical Union.

They support the theory that cosmic rays can influence climate change and affect cloud albedo - the ability of clouds to reflect light.

The importance of clouds in the climate system is described by the Tyndall Centre for Climate Change Research, at the UK's University of East Anglia (UEA). It says: "Clouds strongly influence the passage of radiation through the Earth's atmosphere.

"They reflect some incoming short-wave solar radiation back into space and absorb some outgoing long-wave terrestrial radiation: producing cooling and warming effects, respectively."

And UEA's Climatic Research Unit spells out the complexity of clouds' role in climate change. It says: "The cloud feedback may be large, yet not even its sign is known.

"Clouds are generally good absorbers of infrared, but high clouds have colder tops than low clouds, so they emit less infrared spacewards. 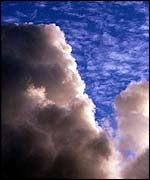 Clouds are crucial to climate change

"To further complicate matters, cloud properties may change with a changing climate, and human-made aerosols may confound the effect of greenhouse gas forcing on clouds.

"Depending on whether and how cloud cover changes, the cloud feedback could almost halve or almost double the warming."

Many scientists agree that the Earth's surface appears to be warming, while low atmosphere temperatures remain unchanged.

Research published last August suggested the rays might cause changes in cloud cover which could explain the temperature conundrum.

The discrepancy in temperatures has led some scientists to argue that the case for human-induced climate change is weak, because our influence should presumably show a uniform temperature rise from the surface up through the atmosphere.

Although researchers have proposed that changes in cloud cover could help to explain the discrepancy, none had been able to account for the varying heat profiles.

But the study suggested that cosmic rays, tiny charged particles which bombard all planets with varying frequency depending on solar wind intensity, could be the missing link.

TOPICS: News/Current Events
KEYWORDS: clouds; cosmic; globalwarminghoax; linked; rays
1 posted on 10/19/2002 8:22:28 AM PDT by blam
[ Post Reply | Private Reply | View Replies]
To: *Global Warming Hoax; Ernest_at_the_Beach; madfly
http://www.freerepublic.com/perl/bump-list
2 posted on 10/19/2002 8:36:20 AM PDT by Free the USA
[ Post Reply | Private Reply | To 1 | View Replies]
To: blam
Clouds play a major, but as yet not fully understood, role in the dynamics of the climate, with some types acting to cool the planet and others warming it up.

Other articles have stated that the oceans play a major role in the uptake of CO2. But what that role actually is, is not really understood.

But the only thing we ARE really sure about is that all the bad changes are caused by humans. Got it?

But the only thing we ARE really sure about is that all the bad changes are caused by American capitolism. Got it?