THE wife of Michael Howard, the Shadow Chancellor, yesterday described how she was thrown into a gutter by muggers who wrenched her engagement ring from her finger.

Sandra Howard, a former model, said she was left shaken by the attack outside the couple’s £3 million home in Pimlico, Central London.

Mrs Howard, 62, blamed escalating street crime in London for the attack and said that muggings had become “frighteningly common”.

She said that she had been targeted because she was a woman alone in the dark.

Mrs Howard said: “It was 11pm and I had parked the car 100 yards from the house when two guys jumped me. I suddenly found myself on the ground with someone’s hands over my ears and mouth so I could not shout.

“They said if I did not shout they would not harm me. Then they tried to get my rings off but at first they could not pull them off because they have been on my fingers for 10 or 20 years.

“They did eventually get them off with a lot of pulling.”

Her husband, the former Home Secretary, was inside the house at the time but was unaware of what was happening. Mrs Howard was left with bruised hands and was shoved to the ground by her assailants.

Police are hunting two men who are believed to have carried out another mugging on a 75-year-old woman an hour later on Monday.

Mrs Howard said that she would not have looked like an obvious target: her car was an old Ford and she was wearing old clothes because she had been helping her daughter to move flats.

“I must have looked like the original bag lady,” she said. “I do not think I was singled out. It was just opportunists who saw a woman alone in a place where there were not many people around and that was fairly dark. It has become frighteningly common on the streets of London.”

Mrs Howard lost her engagement ring, an eternity ring and her handbag to the muggers.She said that the bag contained a watch of “great sentimental value” which had belonged to her mother who died recently.

When the men ran off, Mrs Howard got to her feet and staggered to her house, where her husband called the police.

Mr Howard, 60, said: “It was very shocking. I was very relieved that she was not hurt. I know only too well that it is sadly not uncommon.”

He said that his family had been victims of street crime on three other occasions recently.

Their daughter, Larissa, was mugged outside her South London flat three months ago, had her mobile phone stolen at the Notting Hill Carnival in August and her bicycle cut from railings.

Mr Howard criticised the Government’s “headline-grabbing” initiatives on street crime and said more needed to be done, including better street lighting and reform of the early release scheme for offenders.

Mrs Howard said: “It is sad that you cannot feel that you can park outside your house at 11pm. I felt more frustration than fright. I think I was lucky not to get a parting kick in the stomach as many people do.”

The Howards have been married for more than 20 years. It is Mrs Howard’s fourth marriage. Her first husband, the jazz pianist Robin Douglas-Home, committed suicide after a failed affair with Princess Margaret.

She is the latest in a series of high-profile crime victims.

The actress Joan Collins said this month that she was leaving London because she no longer felt safe. Her eldest daughter, Tara Newley, was mugged for her £7,000 Cartier watch in Notting Hill last year.

The daughter of disgraced former Tory minister Jonathan Aitken, Alexandra, 22, was mugged by a gang of four youths in July.

In March, thieves attempted to snatch a £10,000 diamond necklace from the entertainer Liza Minnelli as she waited at traffic lights in a chauffeur-driven Mercedes. 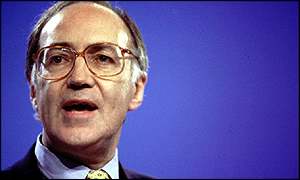 “They said if I did not shout they would not harm me. Then they tried to get my rings off but at first they could not pull them off because they have been on my fingers for 10 or 20 years.

“They did eventually get them off with a lot of pulling.”

I don't think that there is such a thing in the UK.

I believe that they take you in a back room away from the media and a panel of judges pronounces you guilty.

When criminals have no fear of you this is what happens. Duh...
8 posted on 09/15/2002 2:06:28 AM PDT by DB
[ Post Reply | Private Reply | To 1 | View Replies]
To: The KG9 Kid
Interesting. This family has personally seen the increase in crime since the gun ban, yet cannot see the connection? Perhaps they are too stupid to live?

However, had the criminals known who they were dealing with; they might not have attacked. Who could be a better friend to a criminal than a gun-banning liberal who suceeded in baning guns?

Someone mentioned bolt cutters for cutting off fingers to remove rings. Totally unneccesary. If you take an ordinary pocket knife (easier to carry), and place the point in the middle of a joint the finger will cut off easily. I used to be a meat cutter and this is how we cut "ox" tails (actually the tail of a stear, but they are called ox for some odd reason).

Bet he and you never dreamed such foolishness would come home to roost.

Shoe sure hurts on the other foot, doesn't it Mrs. Howard?

And here I was thinking, "But aren't the gun grabbers the muggers' best friends?"

Yeah, yeah, I kinda feel sorry for her, but as the old saying goes, "You've made your bed; now lie in it."

Such fools these British are!

That's not a problem I have.

Either this is badly written, or the woman is a blithering nitwit.