CAIRO (Reuters) - Arab League chief Amr Moussa said Thursday that a strike against Iraq would "open the gates of hell" in the Middle East, and urged Baghdad to readmit weapons inspectors in coordination with the United Nations. President Bush has said he will ask Congress to back possible military action against Iraq and outline the threat posed by Iraq's arms program at the United Nations later this month.

At the end of a two-day Arab foreign ministers' meeting, Moussa told reporters:

"When it comes to the issue of Iraq, yes indeed, we again reiterate the importance of the full implementation of Security Council resolutions. We are for the return of the inspectors within an agreement, an understanding, between the government of Iraq and the secretary-general of the United Nations."

The United States says it has not decided whether or not to use force against Iraq to oust President Saddam Hussein, whom Washington accuses of developing weapons of mass destruction. Iraq denies the charge.

Many countries insist that Iraq should be given a chance to re-admit U.N. weapons inspectors before any strike is contemplated.

Moussa said Arab states were trying to bring about a diplomatic solution and had helped bring Iraqi and U.N. officials together.

But he also complained about the United States' failure to insist that Israel obey U.N. resolutions relating to its occupation of Palestinian territory.

Alongside the issue of Iraq, the continuing Palestinian uprising against Israeli occupation was also on the agenda of the regular meeting of the 22-member Arab League.

The ministers did not immediately issue a final communique, as they traditionally do after such meetings.

And what do you think the attacks on 9/11 opened, a 'New Era of Peace'? Face it, we're comming for you Saddam. The Arabs are worried because they know they'll be next.

God bless the USA and Israel.

Here's a preview of what's ahead for our muslie friends. Mohammed is the guy being tortured by a demon on the top right. Detail:

When is the last time their "leaders" actually fought a war? Instead they simply send their teenagers to commit suicide against civilians. Or hide in their palaces while their people fight and starve.

When have they ever built an airplane, instead of flying them into civilian buildings.

Their culture is one of death. They are centuries behind because of their oil wealth, they have no need to be productive.
6 posted on 09/05/2002 6:59:29 AM PDT by roses of sharon
[ Post Reply | Private Reply | To 1 | View Replies]
Comment #7 Removed by Moderator

Completely off-topic, but it's trivia time: What famous actor made his film debut in an unreleased, unfinished feature named afer that song?

That is really what they fear.

10 posted on 09/05/2002 7:05:37 AM PDT by chiefqc
[ Post Reply | Private Reply | To 1 | View Replies]
To: Pern
Oh, so we are just suppose to sit around while Muslims all over the world declare jihad on America and plot to kill, enslave and destroy us.... While Saddam Insane continues to produce weapons grade Anthrax, VX gas, and works on developing nukes and these other "goodies" to give to toady Muslims to use against America. Sorry, to quote G. BUSH sr...

NOT GONNA DO IT... WOULDN'T BE PRUDENT!

A little over a month ago I stood in a mass grave yard outside the city of St. Petersburg, Russia. The site contains over 186 mass graves. I know because I counted them. THERE ARE OVER 490,000 PEOPLE BURRIED THERE. Over 900, 000 people died in the city of St. Petersburg alone (200, 000 in Jan-Feb 1942 alone) all because the leaders of the world sought to appeas a little madman by the name of Adolph Hitler.

Last month I was in London and visited the Imperial War Museum. There I saw the actual Munich pact letter signed by Hitler and Chamberlain where HItler promised to end his aggression. Europe tried to contain and appease Hitler... the result, HE ATTACKED THEM ANYWAY AND 80 MILLION PEOPLE DIED IN THE PROCESS.

Like Hitler, Saddam has made promises to keep us from stopping his aggression and KEPT NONE OF THEM. If we do not stop him now the cost will be far, far greater to do so in the future.

I watched a show on Islam last night on the History channel. They actually rules from Spain to China in the middle ages. The Ottoman empire was a pretty big deal for a while too.

But then again, Frank Gifford looked good in the 60's and I could kick his butt now!

Revelation 9:1-3 And the fifth angel sounded, and I saw a star fall from heaven unto the earth: and to him was given the key of the bottomless pit. And he opened the bottomless pit; and there arose a smoke out of the pit, as the smoke of a great furnace; and the sun and the air were darkened by reason of the smoke of the pit. And there came out of the smoke locusts upon the earth: and unto them was given power, as the scorpions of the earth have power.

Looks like they are identifying themselves with the locust demons. Well heck, even a broken clock is right twice a day.

These arrogant, self important, dolts really have a handle on the situation don't they? The gates of hell were opened 9-11. What they will inflict on us over there won't amount to taking the lid off a pop corn popper.

They need to learn the lesson and take it to heart, you don't attack the USofA, you don't dream of it, support it, give aid and comfort to the idea, or promote propaganda supporting it, if you wish to put off meeting Allah.

The pool is still open and predictions are still being accepted! 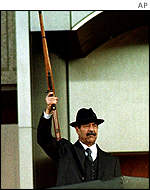 Living easy, living free
Season ticket on a one-way ride
Asking nothing, leave me be
Taking everything in my stride
Don't need reason, don't need rhyme
Ain't nothing I would rather do
Going down, party time
My friends are gonna be there too

I'm on the highway to hell

No stop signs, speed limit
Nobody's gonna slow me down
Like a wheel, gonna spin it
Nobody's gonna mess me round
Hey Satan, paid my dues
Playing in a rocking band
Hey Momma, look at me
I'm on my way to the promised land


And I'm going down, all the way down
I'm on the highway to hell

...in the one can; the other is simply labeled "WHOOP A$$", and they've got a mighty good can opener!