Egypt, Syria, and Jordan may extract information faster, but are their methods legal and reliable?

By Faye Bowers and Philip Smucker

WASHINGTON AND CAIRO – In the war on terror, the US is careful to show how fairly it's treating the hundreds of orange-suited Taliban and Al Qaeda fighters locked behind the razor-wire of the US base at Guantanamo, Cuba. But what the US isn't trumpeting is a quiet practice of shipping key Al Qaeda suspects to the Middle East for interrogation.

One reason for this new approach, US officials privately say, is that in some cases these militants' home countries have a better understanding of Islamist groups, their contacts, customs, and language. But there's another reason, say US sources. These countries – Egypt, Syria, and Jordan, among them – use torture, which, some officials suggest, extracts information much more quickly than more benign interrogation methods.

In a post-Sept. 11 world, where terror threats are received nearly daily, the US faces difficult choices. Can US officials afford to wait for Al Qaeda fighters to spill the goods on their colleagues, or do they need to make them talk as quickly as possible in order to deter additional terrorist attacks? What's the quality of information disclosed through torture? And, what are the costs to US credibility of trading off moral and legal concerns in pursuit of safety?

"This is what you call liaison," says Robert Baer, a former CIA case officer with years of Middle East experience. "And it's not reliable. Before 9/11, the Germans failed us, the British failed us, and I don't think the Syrians will let us sit in on the interrogations." He adds that the US and its allies are so far behind in the intelligence war that "it's catch up ball for everyone."

Since 9/11, according to diplomats, US officials, and press reports, several suspects have quietly been detained and sent to the Middle East:

• Abu Zubaydah, a top Al Qaeda commander, was arrested in Pakistan in March, and moved to an "undisclosed location" by the US, possibly the Middle East.

• Muhammad Saad Iqbal Madni, a Pakistani arrested in Indonesia in January, was bundled aboard a CIA Gulfstream and flown from Jakarta to Egypt.

• Mahmoud bin Ahmad Assegaf, a Kuwaiti citizen and an alleged Al Qaeda financier, was arrested by the Indonesians, and then deported – also at the request of the CIA. The Kuwaiti embassy in Indonesia says it knows nothing about the case, and that it wasn't informed that a Kuwaiti citizen had been detained.

• Mohammad Haydar Zammar, a Syrian-born German believed to have connections to the 9/11 hijackers, was detained in Morocco in June, and reportedly, the CIA arranged for him to be sent to Syria.

• In October, a Yemeni student, Jamil Qasim Saeed Mohammed, wanted in connection with the bombing of the USS Cole was turned over to the US by Pakistan and was flown to Jordan on a US-registered Gulfstream jet.,p.

• Jabarah Mohamed Mansur, allegedly involved in an attempt to bomb the US and Israeli Embassies in Singapore, is currently being held and interrogated in Oman.

Egypt, like the US, won't officially comment on the detainees. Perhaps because these deportations are not done through official channels or according to extradition treaties. But privately US officials confirm the practice. And Ahmed Moussa, an internal security correspondent for the state-supported Al-Ahram newspaper group in Cairo, also confirms the detentions.

"There have been more transfers of Al Qaeda suspects back [from South Asia], but there has been no official announcement of these transfers," says Mr. Moussa. "Just as the US does not divulge information on all its own captives in Cuba, we don't either and there is a benefit to this secrecy."

Moussa goes on to say that all the information obtained by Egypt is shared with both the CIA and the FBI.

Mr. Baer says that the Egyptians have better databases than the US does. "When somebody starts to talk, they will be able to know if he is telling the truth, because they've got all these referral points," he says. "And they have more experience in this than the CIA. But the Egyptians, and especially the Syrians use torture."

There is some debate within the US intelligence community over whether coercive interrogations are effective.

Art Hulnick, another former CIA case officer, as well as Baer, say that a prisoner is liable to "throw up" anything while being tortured, just to stop the torture.

Mr. Hulnick helped interrogate North Korean prisoners crossing the DMZ after the Korean war. He says he believes the ones that were taken by the Americans – given warm clothes, food, and ways to communicate with their family were much more forthcoming than the ones the South Koreans got to first. He says the Koreans beat, tortured, and even sometimes killed the prisoners. And the information they got was not highly reliable.

EGYPT and Syria have their own domestic political motives for interrogating Al Qaeda suspects. In the case of Egypt, several diplomats and officials laud Cairo's efforts to help the US and say that it has essentially become a two-way street. Egypt is helping the US with intelligence and resources, and the US is returning Egyptian nationals wanted for committing crimes in their home country.

"The level of cooperation with Egypt is up on all levels," says a Western diplomat. "In the wake of Sept 11th, they are more eager than ever to cooperate and have more information to provide the West."

Egypt may also extract valuable information from these detainees that may help it defend its own autocratic regime from opposition Islamist voices. It's been cracking down on Islamist groups, which are seen as a threat to the government. Moreover, Egypt's citizens are becoming more sympathetic to Islamist causes, particularly over what they see as Israeli repression of Palestinians, and US support for Israel.

"The government is extremely nervous about giving space to these people," another senior Western diplomat says. "This is not a liberal, tolerant regime."

Egyptian officials have long denied accusations that they torture Islamic militants. But human rights groups say that Egypt makes use of torture on a regular basis.

"We have issued reports [on Egypt's abuses] for decades now," says Carsten Jurgensen with Amnesty International in Brussels. "In the past year, we have also seen an increase in reports of torture. The State Department's human rights report for 2001 also claims there is "credible evidence" that Egyptian security forces, as well as Syria's, use torture.

While facilitating the transfer of detainees to Middle Eastern countries that use torture, the US tried unsuccessfully to block a vote in the United Nations this week on the UN Convention Against Torture, which it has signed and ratified.

The US is concerned that a new protocol in the convention could allow international and independent visits to US prisons and to terror suspects held in Cuba. Conservative Muslim states also don't want outside observers in their prisons. European and Latin American nations are pushing for international oversight.

Syria, like Egypt, has a political motive for cooperating in the fight against Al Qaeda. It views domestic Sunni Islamic militants as a potential threat to the ruling secular regime, which is dominated by adherents of the Alawite branch of Islam.

Furthermore, Syria believes it can score points with the US by cooperating against Al Qaeda-linked Islamist groups to counterbalance its support for hard-line anti-Israel organizations such as Islamic Jihad and Lebanon's Shia Muslim Hizbullah.

"Al Qaeda and its associates are not favored by the [Syrian] regime," says Nizar Hamzeh, professor of politics at the American University of Beirut. "So the Syrians are more than happy to deal with the US against such groups."

The Syrian authorities have refused to publicly confirm that they are holding Mr. Zammar, the Syrian-born German reported to have connections to the 9/11 hijackers. Sources in Damascus say that the CIA has not been granted access by the Syrians to directly question Zammar. But it is perhaps an indication of Washington's resolve in pursuing those behind the Sept. 11 attacks that it permits Syria, with its poor human rights record, to interrogate suspects.

• Nicholas Blanford in Beirut and Dan Murphy in Jakarta contributed to this story. 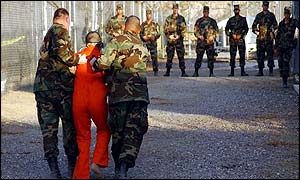