Some things, you just can't do. Flying an airliner while under the influence of alcohol is right at the top of the list. America West always knew that; it's a shame two of its pilots didn't.

America West announced on Wednesday that the two pilots who failed sobriety tests Monday night in Miami are no longer with the airline. They were told they were fired Tuesday.

Pilot Thomas Cloyd, 44, and First Officer Christopher Hughes, 40, were called back to the gate Monday, after security complained that they smelled of alcohol. They were already taxiing out for takeoff to Phoenix with 124 aboard, but returned without incident. They were checked at the plane, failed, and brought to the station for a more-sophisticated test... which they failed.

Cloyd blew .091%, and Hughes hit .084%, both beyond the limit -- for drivers. The FAA has nailed them both; and the Florida cops even got to issue felony drunk-driving citations to the pair. They sobered up and were released on $7000 bond each.

They both have recourse in the firing, to the union, which is not expected to be overly-sympathetic, given the circumstances. 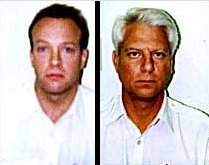 TOPICS: Crime/Corruption; News/Current Events
KEYWORDS: Navigation: use the links below to view more comments.
first 1-20, 21-34 next last
No comment necessary. These guys were criminally negligent and their flying days are over. Their prison days are coming. -C18F
1 posted on 07/04/2002 9:44:05 AM PDT by Criminal Number 18F
[ Post Reply | Private Reply | View Replies]
Comment #2 Removed by Moderator

WASHINGTON (AP) - The Federal Aviation Administration ( news - web sites) revoked the licenses of the two America West pilots accused of trying to fly a jetliner from Miami while drunk.

The federal agency announced Thursday that emergency orders taking away the licenses are effective immediately.

Federal regulations prohibit pilots from operating an aircraft or performing other safety sensitive functions within eight hours of consuming alcohol or if they have an alcohol concentration of 0.04 or higher, said FAA spokeswoman Laura Brown. America West's policy is 12 hours.

Both pilots had blood-alcohol levels above Florida's legal limit of 0.08 after they were ordered to return their Phoenix-bound plane, carrying 124 passengers, back to the gate Monday morning.

Hughes initially told police it was "merely mouthwash," according to police reports.

Arraignment was set for July 22. The pilots could face five years in prison if convicted.

Brown has said Cloyd and Hughes will be able to reapply for licenses after a year by meeting the same requirements they faced when they first applied.

A spokesman for the Cloyd's family, Steve Hicks said, "We're saddened by the occurrences and the allegations made against them."

Arizona police records show that Cloyd has been arrested twice for alleged alcohol-related offenses while at his home in Arizona.

Two years ago, Cloyd was arrested on a charge of disorderly conduct after allegedly harassing his downstairs neighbor. He told police he had been "drinking a lot" before he shouted obscenities, pounded on her door and stomped on his floor, records show.

He was sentenced to two years' probation.

In 1998, Cloyd had been drinking when he was arrested for misdemeanor domestic assault at his home in Chandler, Ariz., near Phoenix, records show. He admitted he spit on his then-wife and shoved her into a refrigerator.

FAA policy requires pilots to report if they have been charged with certain alcohol-related offenses, such as driving under the influence. Their pilot's certificate is suspended after a third offense.

In 2000, the last year for which a detailed breakdown is available, nine of 10,419 airline employees randomly screened for alcohol tested positive, the FAA said. Nine pilots also failed last year.

So far this year, seven have failed, not including the America West pilots.

FAA rules require airlines every year to test 10 percent of employees who have jobs in which safety matters, including pilots, flight attendants and maintenance crews, the agency said.

Airlines must notify the FAA when an employee tests positive for drugs or alcohol.

Pilots who lose their medical certificates can get back into the cockpit by going through a rehabilitation program and getting medical approval.

To: dighton; aculeus
I read a similar report that contained the information that you highlighted in red in the AP story. That a man who had been arrested twice for alcohol-related incidents, and was known for violent behavior towards his wife and neighbors was allowed to fly again, drunk, after "anger management" classes is inconceivable and also very, very frightening. Clearly pilots need to be drug and alcohol-tested before every flight. I heard one pilot argue against that saying that they didn't have time for the tests. Baloney.
7 posted on 07/04/2002 10:29:34 AM PDT by Orual
[ Post Reply | Private Reply | To 5 | View Replies]
Comment #8 Removed by Moderator

To: nohorse
Even if they get a disability status, they're still tossed.

There is no way these bozos are going to get their FAA licenses back. Even in this PC world the FAA and the federal government cannot take responsibility for turning a couple of drunks loose on the flying public.
9 posted on 07/04/2002 10:47:42 AM PDT by scholar
[ Post Reply | Private Reply | To 6 | View Replies]
To: Orual; aculeus; MindBender26; _Jim; Tennessee_Bob; John H K
That a man who had been arrested twice for alcohol-related incidents, and was known for violent behavior towards his wife and neighbors was allowed to fly again, drunk, after "anger management" classes is inconceivable and also very, very frightening.

Yep. This guy has a serious problem, and IMHO should have been suspended or sacked once the problem became evident.

Clearly pilots need to be drug and alcohol-tested before every flight.

Every pilot before every flight? I'd respectfully disagree, and don't think there's a chance of pilots agreeing to it.

FWIW, drug and alcohol tests are done on crew (living or dead) after crashes. I can't remember a single accident report -- admittedly, I haven't read anything like all of them -- that showed significant blood alcohol.

Nor do I, they have a very powerful union that would fight tooth and nail against it. But I still believe they should be tested before every flight.

To: Criminal Number 18F
What I would like to know is how many times they have been flying drunk undetected.
13 posted on 07/04/2002 11:31:32 AM PDT by diggerwillow
[ Post Reply | Private Reply | To 1 | View Replies]
To: dighton; Orual; MindBender26; _Jim; Tennessee_Bob; John H K
I can't remember a single accident report -- admittedly, I haven't read anything like all of them -- that showed significant blood alcohol.

A jet crashed in Alaska years ago and the dead pilot's blood alcohol level was way over anyone's definition of drunk, much higher than these two pilots. It was a freighter, flying cattle to Japan.

Actually alcoholics have a very high tolerance and I'd rather fly with an alcoholic pilot whose had a few than a non-alcoholic. His hand-body coordination would not be as impaired.

Years ago I read of a group within AA made up of recovering alcoholics who had commercial pilot licenses. They called themselves Birds of a Feather.

There are many active alcoholic pilots. Don't forget F. Lee Bailey ... he is a licensed pilot and may still represent the pilots' union. Read Patty Hearst's book about her trial and her descriptions of Bailey's alcohol consumption -- at lunch, during trial -- and make up your own mind.

I ran a search for positive % alcohol on the http://www.ntsb.gov/ntsb/query .asp aviation database. This would pop up any accident report with the word "positive" and "alcohol" in the same sentence. This yielded 26 records. Three records pointed to alcohol as a factor in the crash, two pointed to drugs (marihuana (their spelling), ephedrine, cocaine, psuedoephedrine and more), one pointed to alcohol and drugs. The remainder of the reports that were pulled were listed as reporting that the pilot/crew were not positive for alcohol.
15 posted on 07/04/2002 3:56:08 PM PDT by Tennessee_Bob
[ Post Reply | Private Reply | To 14 | View Replies]
To: dighton
Lots of hits here on a search for 'alcohol' and 'accidents' on the FAA.GOV domain
16 posted on 07/04/2002 4:10:32 PM PDT by _Jim
[ Post Reply | Private Reply | To 10 | View Replies]
To: aculeus
There are many active alcoholic pilots.

That is the most assinine statement I've ever read on this board. I suggest you supply us with proof of this amazing revelation? Oh and before you suggest I post proof, read Tennessee Bob's post in #15. He beat me to the punch. In my ten years of flying I have had nothing but responsible professionals next to me, to the last man. They all are professionals and conduct themselves as such pre, during and post duty times. And I know of very few who drink. These two were an exception, not the rule. The aviation industry gets enough speculative garbage from the media. I suggest you get a clue before you go generalizing on an industry you obviously know nothing about.

o Pilots have shown impairment in their ability to fly an ILS approach or to fly IFR, and even to perform routine VFR flight tasks while under the influence of alcohol, regardless of individual flying experience.

o The number of serious errors committed by pilots dramatically increases at or above concentrations of 0.04% blood alcohol. This is not to say that problems don't occur below this value. Some studies have shown decrements in pilot performance with blood alcohol concentrations as low as the 0.025%.

*Some cases may include alcohol produced after death by tissue decomposition.
BAC= Blood alcohol concentration

While blocking healthy captains from flying after the cutoff age, the FAA has been liberal over the years in certifying alcoholics, past drug abusers, pilots with psychiatric problems, and those who are blind in one eye or deaf in one ear, as well as hundreds who have undergone multiple heart bypass operations.

Followed up by a search for 'ALPA' (Air Lines Pilot Assoc.) and 'alcoholics':