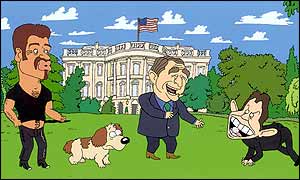 Pop star George Michael's latest pop video has depicted Prime Minister Tony Blair as a "poodle" to US President George Bush in a cartoon political satire. It also features a scene in which the singer, dressed in a leopard-print thong, apparently tries to seduce Cherie Blair. 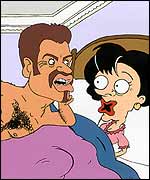 Michael had begun writing the song Shoot the Dog before the US attacks on 11 September, but because of the nature of the lyrics it was delayed until its release on 12 August.

His previous video, for the song Freeek, featured sexual images which prompted the Broadcasting Standards Commission to rap BBC One for broadcasting it before 9pm on Top of the Pops.

Shoot the Dog also has another dig at the two leaders by depicting them dancing the tango, with Mr Blair in a flowing dress.

Michael continues the digs at Mr Blair by depicting him as captain of a ship in the shape of Britain as it sails ever closer to the US, but without realising he is still moored to Europe.

Michael said he was concerned about the growing relationship between the prime minister and President Bush.

"Don't get me wrong, I am definitely not anti-American, how could I be, I have been in love with a Texan for six years and we are still going strong," he said.

"My feelings about George Bush, however, are a little different. And I know I'm not alone in fearing his politics, and in hoping that our man Tony can be a calming and rational influence on him."

Michael is also concerned about the lack of public consultation regarding the War on Terror. "On an issue as enormous as the possible bombing of Iraq, how can you represent us when you haven't asked us what we think?

"And let's be honest, we haven't even begun to discuss it as a society," said Michael.

But he also said he was "under no illusions" his comments were anything more than that of a pop star.

"Nevertheless, I have strong opinions on Britain's current situation and I feel that in a time when public debate is being suppressed, even something as trivial as a pop song can be a good thing," he added. 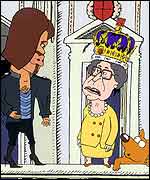 A Downing Street spokesman did not wish to make any comment on the video.

Another of Michael's videos, made after he was arrested for lewd behaviour in a public toilet in Los Angeles in 1998, also courted controversy.

A police officer who arrested the singer during the incident attempted to sue over the video for Outside, claiming he was depicted in it kissing another man. The case was later dismissed.

They really are insufferably stupid, aren't they?

Just because you're famous doesn't mean your body is impervious to the ravages of time.