A British company is producing an educational CD-Rom that encourages Muslim children as young as five to "kill" Israelis.

The CD, called Islamic Fun!, is being sold for £19.95 from a suburban home in Crawley, West Sussex. One of the games on the disc, obtained by The Independent on Sunday, is called The Resistance and tells children playing it: "You are a farmer in south Lebanon who has joined the Islamic Resistance to defend your land and family from the invading Zionists."

Players procure ammunition to fire at Israeli tanks by answering multiple choice questions and then firing at the Israelis as the tanks roll across the screen. There are three playing levels: for children aged between five and seven years, those aged eight to 10, and the hardest level for children aged 11 and over.

Questions include "What was the crime of the Jews of Khayber?" and "Who said: 'I know I have been elected thanks to the votes of US Jews. I owe my election to them. Tell me what I have to do for the Jewish people' to Ben Gurion?"

Abbas Panjwani, the director of the company Innovative Minds, which produces Islamic Fun! said: "The game does not target any human beings including soldiers, it targets Israeli tanks. From that point of view it's no different from any other war game. It does not target any religious or racial group including the Jewish community. In fact its educational content teaches children the difference between Judaism and Zionism."

The company has been producing the game for more than three years but it has come to the notice of the Jewish community only in recent weeks and follows a campaign on Innovative Minds' website calling for a boycott of Israeli goods.

Mr Panjwani said: "Since last December when we started [our] boycott Israeli goods campaign we have received violent threats to my wife and child, abusive phone calls, several hundred hate e-mails every day, our website was forced to close down due to threats against our host providers which have all been reported to the police.

"This matter of the game is the latest of a whole series of abuse we have been receiving simply for practising our right to oppose illegal occupation and atrocities committed by the state of Israel."

The Board of Deputies of British Jews, which represents UK Jewry, has investigated the legal status of the CD-Rom but has been advised by lawyers there is no current legislation to make Islamic Fun! illegal. Fiona Macaulay, the board's director of public affairs, said: "This CD is completely inappropriate for children. This is the sort of material that when taught to children breeds violence and hatred. It is a tragedy that this is coming not from Lebanon but from Crawley."


Meow Tiles Help the cat uncover the image - what is this cute creature?


Fishing Bear Help the bear fish, he has five hungry quests to feed! 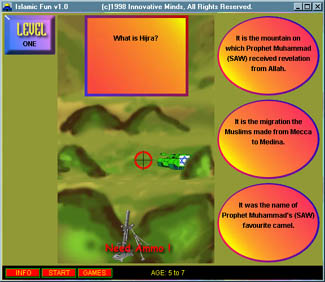 THE RESISTANCE You are a farmer in South Lebanon who has joined the Islamic Resistance to defend your land and family from the invading zionists.

BTW, I once saw screen shots of a racist DOOM wad.

Here is a description of why they boycott one of these companies:

From 1966 onward Coca-Cola has been a stauch supporter of Israel. Recently the Government of Israel Economic Mission honored Coca-Cola at the Israel Trade Award Dinner for its continued support of Israel for the last 30 years and for refusing ro abide by the Arab League boycott of Israel. [1]

Recently Coca-Cola teamed up with "Friends of Israel" and National Hillel to cosponser a lecture given by the infamous zionist correspondent Linda Gradstein at the University of Minnesota.[

I hope supporters of Israel will conciously decide to do business with these companies that are being boycotted.

Our host company explained that they had received threats and were tipped off by "a reliable source in the industry" against an imminent attack on their servers. They reasoned that if their servers were attacked they stood a good chance of going out of business overnight. They have 25 employees to support as well as their other clients websites to protect. They said that the decision to pull our site was not an easy one for them as they believe in the ethos of free speech on the internet. They explained that even their bandwidth provider had been threatened and that they had to send a formal email to them confirming that our site was no longer available.

[ Ha! I'll bet they just didn't like losing the dough from Saudia Arabia. ]

Currently we are still off-line, but inshallah within the next few days we should be operational once again.

Our message to the zionist thugs out there is that your tactics of terror will not succeed either in Palestine or in cyberspace. If our site is closed down again, we will simply re-open else where with added vigour. We will not submit to your oppression, to do so would be to deny our faith and our belief in Allah.

Gee, it's just peachy for them to romanticize for a five year old to immolate themselves in stupid homicidal terrorism, but a good old fashioned hacker attack that we are all used to has them rattled. Tsk' Tsk' no sense of perspective.