Leftist leaders of the environmental movement are attacking far Left filmmaker and Bernie Sanders supporter Michael Moore, trying to destroy the progressive documentarian for honestly pointing out the green energy scam is nothing more nor less than crony capitalism disguised as the planet’s salvation in his new film, “Planet of the Humans,” released on YouTube for free viewing on the 50th anniversary of Earth Day.

Produced by Moore and directed by his long-time collaborator Jeff Gibbs, the film exposes the facts that green energy can’t prevent climate change, and those saying it can are profiting handsomely from government green energy subsidies and mandates.

The movie shows, for example, solar panels are made with metallurgical coal and require 16 times more materials in the form of cement, glass, and steel than do nuclear plants, and create 300 times more waste.

Renewable fuels are produced using tractors that run on diesel, use water pumped by electricity, most often from fossil fuel power plants, and are delivered to distilleries powered by electricity with trucks fueled by diesel. And the crops used to make bio-fuels use millions of gallons of water annually and require the conversion of 400 to 750 times more land—depending upon the crop grown to produce the fuel—to produce an equivalent amount of petroleum.

Aside from showing the green energy emperor has no clothes, Moore and Gibbs also skewer green energy profiteers. For instance, billionaire Elon Musk, whose company has benefited greatly from millions of dollars in federal tax credits for electric cars and state property tax abatements for his factories, brags his Gigafactory battery manufacturing plant in Nevada is powered 100 percent by renewables. Gibbs shows it is hooked up to the electric grid, relying on natural gas for much of its power.

The film shows Al Gore, the political godfather of climate alarmism, raked in approximately $100 million when he and his co-owner of Current TV sold the channel to Al Jazeera, a network funded by the government of Qatar, whose operations are largely funded by oil and gas revenues and whose citizens have the largest per capita carbon footprint in the world. Simultaneously, Gibbs shows Gore, his billionaire corporate investment fund cronies, and environmental groups including the Sierra Club, promote and are profiting from biomass burning—cutting down and burning trees often mixed with used tires—to replace coal for electric power generation. This emits as much or more carbon dioxide and even worse toxic pollutants into the atmosphere than coal.

When Gibbs examined a supposed green energy investment fund, the Green Century Fund recommended by Bill McKibben’s 350.org, he “found less than one percent solar and wind and 99 percent things like mining, oil and gas infrastructure, a tar sands exploiter....”

Gibbs explained in an interview with Breitbart, neither Moore nor he had intended to challenge the effort to replace fossil fuels with renewable power. Instead, they wanted to understand why it hasn’t been more successful. Instead of dark forces and moneyed interests suppressing green energy, they found corporate interests were behind and profiting from policies subsidizing and mandating renewables, and renewables actually require the use of fossil fuels.

“It turned out the wakeup call was about our own side,” Gibbs told Breitbart. “It was kind of crushing to discover that the things I believed in weren’t real, first of all, and then to discover not only are the solar panels and wind turbines not going to save us … these technologies were just another profit center.”

For the sin of telling the truth about the Left’s green energy fantasies, environmental leaders are attempting to undermine “Planet of the Humans” and halt its viewing.

Climate realists have long described the tremendous virtues of fossil fuels when compared to renewable energy sources, including in the authoritative Climate Change Reconsidered II: Fossil Fuels. Realists have also repeatedly pointed out the high environmental and human health costs produced by green energy, as in a recent paper by The Heartland Institute, “Policy Brief: How The Green New Deal's Renewable Energy Mining Would Harm Humans And The Environment,” which examines the horrendous toll on human health and the environment produced during the mining and refining of minerals critical for wind, solar, and battery power. Coming from conservatives, the mainstream media has largely ignored this research—it goes against their liberal bias. That’s why Moore’s “Planet of the Humans” is dangerous; it comes from one of their own.

Although I haven’t often agreed with the messages Michael Moore and Jeff Gibbs have promoted in their past films, “Planet of the Humans” is spot on. Green energy is bad for the environment, the economy, and human freedom. To Moore and Gibbs, in the immortal words of celluloid hero John McClane, I say, “Welcome to the party, pal!”

Thanks for the info

I certainly learned a lot about this, from you and the video

I appreciate the information. I noticed that the Moore documentary made no mention of sustainability efforts of the biomass industry.

It was just fine by me.

We’ve always been at war with East-Asia

Hey..I learned a long time ago from the Trust Fund Babies that moved to Maine yrs ago.....The secret to “living off the grid” was a really good generator..an old Volvo...and a greenhouse to grow your pot......Ohh..and learn to live off the interest of the Trust Fund so you don't have to work...

Nothing about Indian Point is obsolete. They just turned it off because it’s nuclear.

Mikey must have raised a few inconvenient truths.

This whole idiotic “Climate Change” issue was never anything but a fraud and a money grubbing scam from inception. It has nothing to do with science. There was never any question about this, only speculation as to how many could be fooled and driven to economic serfdom by fear. Simply and replay of the “Chicken Little” fairy tale, believed by those that had never heard it before. 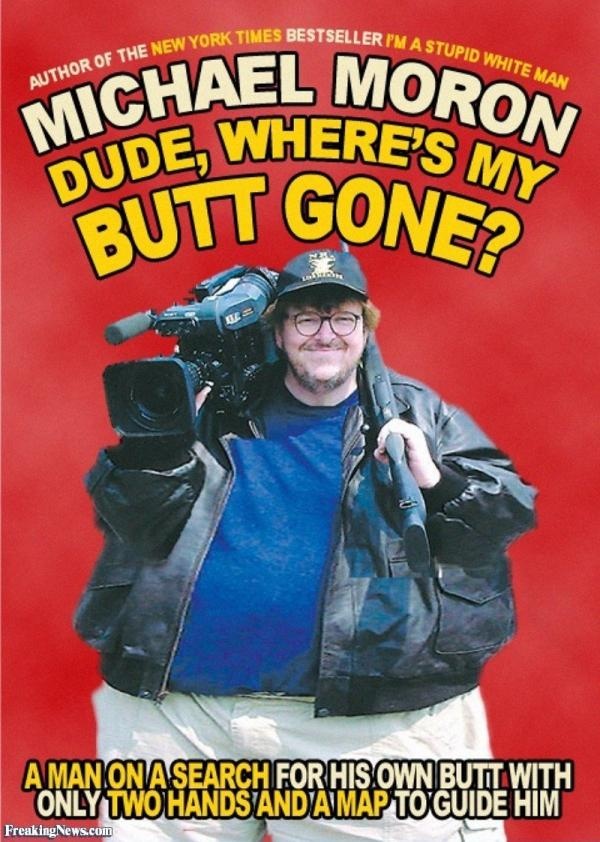 He could have invested in reopening the factory in Flint, Michigan, have them make some damn woke doohickey or other, BLM ribbons or Save the Whale, They’re My Cousins bumper stickers, or whatnot. But noooo.