President Trump’s campaign adviser, Roger Stone, was arrested by an FBI SWAT team, tried and convicted for lying to Congress and messing with a witness, and nearly had a book the size of a blue state thrown at him at sentencing. Meanwhile, Andrew McCabe, the fired FBI deputy director who, while in his official capacity, lied under oath in violation of a federal statute, won’t be charged by the Department of Justice (DOJ) for any criminality. Go forth, Andrew, and make more money as a CNN analyst.

What seems confusing is really becoming quite plain to all of America: Those on one side of the political aisle are feeling the heat of the justice system, while those on the other side are not. It’s kind of like political “stop and frisk” enforcement: “Hey, Republican, what are you doing in this neighborhood? Up against the wall. Let’s see what we can find on you that we can take to court.”

Yet, while frisking, the enforcers ignore the well-heeled looters behind them, destroying records, selling pay-for-play access, seeking Russian propaganda for political dirty tricks, lying to Congress and the FBI — all activities which, to date, seem consequence-free.

Stop and frisk is a perilous policy, whether practiced on the street or for political advantage. It exposes the justice system to unconstitutional overreach and perceptions of an unfair two-tiered approach to certain citizens.

Most don’t know Roger Stone from Roger Ramjet, who was popular long ago, when Stone started practicing political sleaze for Richard Nixon. Oh, we’re somewhat aware that Mr. Stone is mixed up in the whole Russia-Trump collusion thingy, but not many of us are exactly sure what he did wrong.

Anybody who does not realize that we do have a TWO TIER “Justice” system has not been paying even scant attention for a number of years now.

Sundance has done a couple of good reports on this...

The problem is, the swamp is not going to clean itself. So who will?

We are WAY BEYOND mere perceptions, Kevin. That horse left the barn years ago. The facts and evidence of this two-tiered justice system are as plain as the nose on your face. Perhaps the most egregious example is Comey's announcement that he wouldn't go after Hillary Clinton for her extreme violations of laws against mishandling confidential information because she didn't INTEND any harm. Comey made prosecutorial decisions that were not in his wheelhouse - they lawfully should have been made by the DOJ.

There were two excellent articles on this topic yesterday, one by Andrew McCarthy and one by J. Christian Adams.

There has been, and always will be a 2 tier justice system. They’re emboldened by the support of the mainstream media. Just try and stop them.

6 posted on 02/17/2020 8:36:50 AM PST by brownsfan (Behold, the power of government cheese.)
[ Post Reply | Private Reply | To 1 | View Replies]
To: karpov
It’s kind of like political “stop and frisk” enforcement: “Hey, Republican, what are you doing in this neighborhood? Up against the wall. Let’s see what we can find on you that we can take to court.”

Police State...by...Gerry Spence...the DOJ and FBI have been corrupt for forty years 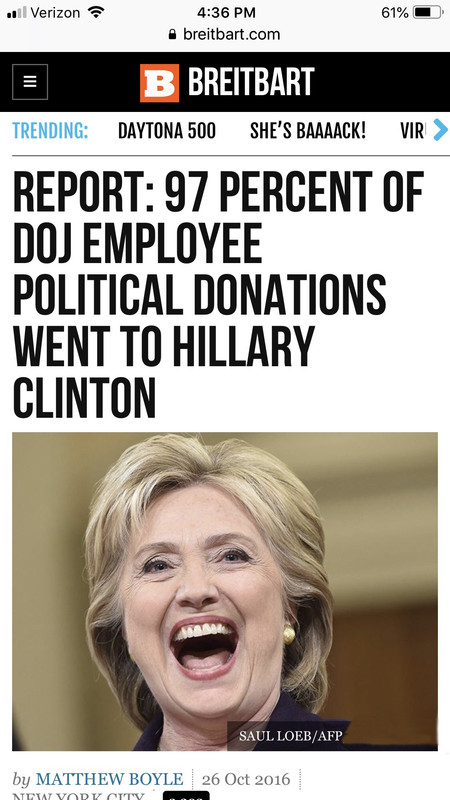 When James Comey stood there and read off Hillary Clinton’s list of violations of the law, and the incredibly claimed he couldn’t find intent, every one watching that knew that the two-tier justice system was in full operation.

And it has only gotten worse.

This can ONLY be remedied by prosecuting lawbreakers inside the Department of Justice.

The real problem is that one party controls the entire government at the civil servant level. One way to reduce that problem would be to move the government out of Washington.

They ignored direct violations of the law with obvious statutes in the Clinton case granting immunity to associates at every turn. A case that was certainly justified by the known facts and we KNOW based on text messages that the investigators believed the actors lied to them and destroyed evidence. There was a massive obstruction of justice involving a lot of people.

They collected process crimes in the other investigation with no underlying crime even excluding exculpatory information using the most powerful court in the nation to investigate. It was very aggressive. They made threats against family members and associates of their targets. They aggressively served warrants and made arrests. They used a statute that had rarely been mentioned - FARA. They used a dossier not once, but four times, a dossier bought and paid for by a political opponent and one that even the “author” will not stand behind.

How can a person claim to be objective and/or fair and not see the blatant double standard?

There is no such thing as a self licking ice cream cone.

Anybody who does not realize that we do have a TWO TIER “Justice” system has not been paying even scant attention for a number of years now.

The Mafia used to pay off officials to get similar protection against prosecution. Just saying.

What is this “in danger of”? It is not here already?

Another way is to dramatically shrink the size and scope of the federal government. It keeps growing ever larger and with that growth so do the ever increasing opportunities for corruption, graft and partsian manipulation.

Government is way too big and concentrated in one place. Neither is healthy for a democracy (which has inexorably morphed into the corruptocracy that we now are).

Correct. It is already here. To be sure, confidence in our legal system, and indeed our government, has cratered. The public has lost faith.

Personally I would like to move the Supreme Court and Justice Dept to Alaska.

A lot of people would support that idea. Our legal institutions shouldn’t be anywehre near the seat of government.