Sen. John McCain (R-AZ) and his aides swear the Syrian “rebels” he was pictured last year with weren’t ISIS members or supporters, and the mainstream media is by and large buying the 2008 GOP presidential nominee’s story.

But a closer look at the situation tells perhaps a different story than McCain’s office or the mainstream media have pushed.

The criticism of McCain centers around how the Arizona senator met with Syrian rebel leaders in May 2013 when he visited the country. McCain posed for photographs with those people, and since then rumors have sprouted up across the Internet that he met with ISIS or some other terrorist kidnappers or nefarious forces.

“The people in the pictures with Senator McCain in Syria included General Salim Idris, then-Chief of Staff of the Supreme Military Command of the Free Syrian Army (FSA), Mouaz Moustafa, the Executive Director of the DC-based Syrian Emergency Task Force (which supports the moderate opposition and helped arrange some of the trip), and fighters and commanders from the Northern Storm Brigade, a FSA-aligned group,” McCain’s spokesman Brian Rogers told Breitbart News.

Rogers said that the senator and his team aren’t naming the “fighters and commanders from the Northern Storm Brigade, a FSA-aligned group,” because “ISIS actually threatened to kill them all, and we don’t want to put their lives at risk.” Rogers provided Breitbart News with a link to the ISIS threat to those fighters.

Didn’t he pose with Abu Goatf**ker, the guy who was the public relations dude for ISIS? I know that now he’s burning in hell.

The regular suspects circle the wagons around their income source.

“It is difficult to get a man to understand something, when his salary depends on his not understanding it.” 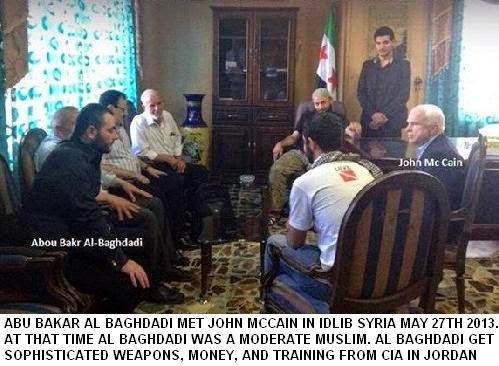 This stupid old man always has to stick his nose in. He sets himself up for that because he thinks he knows so much. He is used and he brings all of us down with his idiocy.

Why couldn’t this have happened during the ‘08 primary season?

Which would have given us Romney as the nominee ...

Obama, Kerry, Clinton, Pelosi, McCain have all been in bed with these terrorists. They’re idiots!

How is it that we, with the very little information we have, see that these people are bad but these idiots can’t?

The “choice” of McCain vs. Obama in 2008 was the piss-poorest I’d ever seen in my life. The ONLY reason I voted for that ticket was Sarah Palin.

Great quote: “It is difficult to get a man to understand something, when his salary depends on his not understanding it.”

Two days ago, Speaker “Blank Check” Boehner approved the spending of $ 500,000,000 of US Taxpayer Dollars to “train” 5,000 Syrian Muslim Rebels in Saudi Arabia for one year. IOW, another Boehner Bailout Bill to Obama.

Here are a few discussion points that were NOT mentioned by Boehner:

* 5,000 Syrian Muslim Rebels will be removed from the battlefields in Syria to a training site in Saudi Arabia for one year.

* The removal of 5,000 Syrian Muslim Rebels will leave their families with reduced protection from attack by Syrian Army troops, for one year.

* The removal of 5,000 Syrian Muslim Rebels will leave their families with NO protection from attack by ISIS troops, for one year.

BTW, did anyone notice if before the US Senate approved Boehner’s Bailout Bill yesterday, did any US Senator mention that removing 5,000 Syrian Muslim Rebels from the battlefields of Syria, was in effect, “Giving aid and comfort to the ENEMY” for the period of one year?

Libya, Syria, Ukraine,??? Who put him in charge of foreign policy?

Is it just me or has anyone else noticed that in the entire Middle East there are two forces and two forces alone that sling their Kalashnikov’s in the “American” Patrol Ready position?

Barrel down, Toe of the Stock pressed into the Shoulder, index finger outside of the trigger housing running parallel along the receiver.

Those two forces would be the Iraqi Army (clearly trained by Americans) and the newer ISIS troops that have showed up in the last year. That’s odd yea? Troops do as they are trained.

Here is the plan. This arming “Syrian rebels”, ahem...FSA to get ISIS is a joke. The rebels have always been ISIS and they were never really moderates.

The Saudis want Assad gone, they want Syria. They didn’t get their way last year by getting us to do the dirty work, so the rebels became ISIS and decided they would force us into this war by taking over Iraq and committing mass slayings.

Perhaps a deal was struck a time ago to give them Syria. Who knows? We didn’t deliver last year. So now, we are all for arming “moderate rebels” and training them in, ahem... Saudi Arabia.

Obama mentioned the other day that Assad better not shoot down our planes. Ahem, he tells us what will happen. A plane will go down and Assad will be blamed setting up the US to go all out getting rid of Assad.

McCain and crew think ISIS is saying “give us what we want and we will go away”.

Question is, would they really?