President Obama spoke in Dallas, Texas tonight to promote Obamacare in Ted Cruz‘s backyard. Obama defended the health care law from critics, pushed for Texas to embrace portions of the law as other Republican-run state have, and insisted that “We’re on the right side of history” in the health care fight.

He acknowledged how “challenging” the fight has been so far, and argued that if Texas were to embrace Obamacare, a million people in the state would automatically get health insurance and wouldn’t have to go through the glitchy website to do it.

Obama also took a shot at what he said was an illogical argument coming from critics of the law.

“One of the things that sometimes gets me a little frustrated… is folks who are complaining about how the website’s not working and ‘why isn’t Obama fixing this’ and ‘all these people are uninsured,’ and yet, they’re leaving a million people right now without health insurance that they could immediately fix. There’s not a lot of logic to that.”

He acknowledged the frustrations with the health care website, but pledged “we are going to get this done” no matter how long it takes.

Dumbo wouldn’t know logic if it hit him like a Mac truck.

Get OUT of Texas carpetbagger.

I felt a bit dirty knowing you were here.

“We’re on the right side of history” …

I predict that the phrase “We’re on the right side of history” will be the most eaten set of words in the near future.

I see your BULLSHIT meter. We need an OBAMASHIT meter.

The Obama administration lied through their teeth to get this bill passed and the Dems in the Senate and House bit on his lies or were part them. This is simple fact.

Today, I am convinced that Obama is going to hold on hard for the next three years....no matter what carnage is wrought on the Democratic Party...or more importantly on the country. Obamacare is his ‘achievement.’ Period!! There will be no compromise, no delay, no fixing, no anything.

Today was a good window into Obama’s political plans for the next three years: hunker down with his most fervent supporters (8th grade drop-outs, the unmotivated, the unaccomplished, the unsuccessful, the angry, the aggrieved, the guilty white people, and the victim class) for the next three years and ride out the political sh-t storm he’s created.

The only thing that could possibly bring change to this law is a veto proof majority from both houses demanding change. But Obama probably has something on enough of the folks in congress (remember the NSA stuff is in his hands), so that is not even that likely to happen even if the public demands that it happen. In short, we are owned!!

So, absent an unlikely act of congress, it’s full speed ahead with Obamacare.....poll numbers, public opinion, and medical dissaster be damned. Get used to it. It’s our fate for the next three years. Period!!!

Obama is a Jive thug.

He probably just wants to check up on how his ‘illegal alien running’ program is going in Texas. “How’s my ‘red turns blue state’ program going here?” he asks..

15 posted on 11/06/2013 8:15:39 PM PST by Obama_Is_Sabotaging_America (If Americans were as concerned for their country as Egyptians are, Obama would be ousted!)
[ Post Reply | Private Reply | To 1 | View Replies]
To: Tailgunner Joe
"He acknowledged the frustrations with the health care website, but pledged “we are going to get this done” no matter how long it takes."

When he's finally got it up and running I expect it will be about as useful as the Federal "Do Not Call" registry.

“no matter how long it takes”

I knew I smelled a stench in the air yesterday. Hey punk POTUS.....GTFO of our state. get'em going the wrong way across the border.. 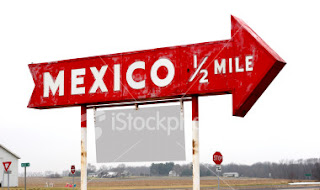 ..and then seal that sucker