Conservative bloggers went wild Monday when they got wind of the Congressional Black Caucus’ suggestion that President Obama pick Rep. Sheila Jackson Lee of Houston for the post of Secretary of the Department of Homeland Security.

Rich Cooper, avid blogger for Security Debrief, responded to the news of the Jackson Lee recommendation in a post by saying, “Apparently, it is not a joke. For reasons that baffle any sense of reality, it is a serious gesture on the part of the Congressional Black Caucus (CBC) to encourage President Obama to nominate Rep. Jackson Lee as a replacement for outgoing-DHS Secretary Janet Napolitano.”

A letter dated July 25 and signed by CBC Chairwoman Rep. Marcia Fudge, an Ohio Democrat, urges President Barack Obama to consider Jackson Lee for the position formerly held by Janet Napolitano, the first woman to hold the position. Napolitano resigned earlier this month to become president of the University of California.

“Representative Jackson Lee would serve as an effective DHS Secretary because she understands the importance of increasing border security and maintaining homeland security,” the nomination letter reads.

Since entering Congress in 1995, Jackson Lee has served on several committees, including Foreign Affairs, Judiciary and Homeland Security, in which she was the Chairwoman of the Homeland Security Subcommittee on Transportation Security and Infrastructure Protection.

“As Chairwoman, Representative Jackson Lee supported increased airplane cargo inspections and increased security for railroads, issues of great importance to the security of this nation and its citizens,” the letter continues.

Jackson Lee currently holds the post of Ranking Member of the Homeland Security Subcommittee on Border and Maritime Security, a position that the CBC says she “stands as a strong and honest ‘voice of reason.’”

“I wouldn’t let this twit mop floors at McDonalds.”

I would! A job commensurate with her experience

I still say it’s because they want her out of the Congressional Black Caucus and this is the only way they can do it.

Anyone who works for the Government knows that many times the only way to get rid of the trash is to promote it , and send it somewhere else.

I will never forget when she stood up on the house floor and said “Mr. Speaker, I rise in objection to the 4th Amendment of the Constitution of the United States”.

And I thought it just couldn’t get any worse than “Big Sis” telling us how the southern border is more secure than it’s ever been.

(fwiw, I don't think McKinney's as bad as the others)

That would actually be awful. The puppet-masters who run the RNC would get arrogant and overconfident that they could win the next election without the conservative vote. They'd get in our faces with a Jeb/Christie ticket or worse. Then they'd tell us that constitutional conservatives have to choose the "lesser of two evils".

And when conservatives don't bother, the ptb don't care. As long as they have control of the Republican party, they get all the benefits that come with being the fake opposition.

Isn’t this just the CBC’s way of insulting Janet Napolitano?

I love that movie. Every time I watch it, I notice something new and hilarious.

This qualifies as a joke.

70 posted on 07/30/2013 5:18:36 AM PDT by I want the USA back (We live in a fascist dictatorship, thanks to half the public having its head up its a$$.)
[ Post Reply | Private Reply | To 1 | View Replies]
To: jiggyboy
"We saw millions of Republicans sit at home out of spite rather than vote for Romney, after seeing what Obama had done do the country in his first term."

I voted for McCain and Romney. I will not vote for any more like them. In fact, I am changing my registration to "independent." It's quite clear the Republican Party is now just an appendage of the Democrat Party -- and I don't want anything to do with either of them.

Sad thing is that the people who keep electing her may end up electing someone even further to the left. Can you imagine that mental midget Quannell X in Congress? That would be an even bigger disgrace.

She would most likely try to mop with the wrong end of the mop.

They all look alike to Sheila Jackson-Lee (D, TX-18) 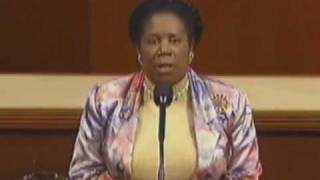 Old Yeller requests her for the nuthouse.

Ah Ms.Kawanza, of course. She is the perfect candidate. Makes perfect sense.

If the Muslim Brotherhood doesn’t scare us, lets fill the government up with black radicals and see if THEY makes conservatives cry.

LOL- except- the MB and the NAACP might look like interesting bedfellows- but THEY will kill each other at some point. Do you really think Islamist, who hate drunks, are going to appreciate the she-nay-nay of the ghetto black crack head?

What a cage match.

Go ahead- Obama. You think you are so smart.

Play through and let’s watch your genius.

At first I found it humourous about Sheila Jackson Lee, but then I realized it’s Barry’s way of messing with Texas. Put Queen Sheila in charge of gun grabbing. Let her deploy DHS troopers to do some election poll monitoring. Obama could be pushing big time for a one Party country and RINO GOPers are just rolling over. Look how they voted on NSA funding. Get ready for Hildabeast in 2016, she’s worse than Obama. GAME OVER!!!

Oh I am sure that is part of it. BUT- will it work?
About as well as the race wars and riots after the Zimmerman trial worked.

His plans are pretty obvious, aren’t they? They just never seem to come into fruition.

I’m real curious about Quannell X. Every time I read the Houston Chronicle and there’s talk of a black person more loony than Queen Sheila, I keep hearing the name Quannell X. Can some FReepers from Houston please provide some info. on this clown. I’ve been thinking that if I ever return to the US, I’m headed straight for Houston. I would like to learn more about Houston politicians, especially the Democrats out there.