Dear friends and colleagues in the field of education,

It seems that the character assassination and slander of Bill Ayers and other people who have known Obama is not about to let up.

While an important concern is the dishonesty of this campaign and the slanderous McCarthyism they are using to attack Obama, we also feel an obligation to support our friend and colleague Bill Ayers.

Many, many educators have reached out, asking what they could do, seeking a way to weigh in against fear and intimidation. Many of us have been talking and we agree that this one gesture, a joint statement signed by hundreds of hard-working educators, would be a great first step. Such a statement may be distributed through press releases or ads in the future.

Please click on ENDORSE THIS STATEMENT in order to sign the following statement in support of Bill Ayers and, just as importantly, FORWARD it to other friends and colleagues who would like to stand up against these attacks.

(*Title/Affiliation will be listed for identification purposes only. Please be assured that we have no intention of using your name for any other purpose than beneath the words on this page.)

Friends and supporters of Bill Ayers

We write to support our colleague Professor William Ayers, Distinguished Professor of Education and Senior University Scholar at the University of Illinois at Chicago, who is currently under determined and sustained political attack.

Ayers is a nationally known scholar, member of the Faculty Senate at UIC, Vice President-elect of the American Educational Research Association, and sought after as a speaker and visiting scholar by other universities because of his exemplary scholarship, teaching, and service.

Throughout the 20 years that he has been a valued faculty member at UIC, he has taught, advised, mentored, and supported hundreds of undergraduate, Masters and Ph.D. students. He has pushed them to take seriously their responsibilities as educators in a democracy – to promote critical inquiry, dialogue, and debate; to encourage questioning and independent thinking; to value the full humanity of every person and to work for access and equity.

Helping educators develop the capacity and ethical commitment to these responsibilities is at the core of what we do, and as a teacher he has always embraced debate and multiple perspectives.

All citizens, but particularly teachers and scholars, are called upon to challenge orthodoxy, dogma, and mindless complacency, to be skeptical of authoritative claims, to interrogate and trouble the given and the taken-for-granted. Without critical dialogue and dissent we would likely be burning witches and enslaving our fellow human beings to this day.

The growth of knowledge, insight, and understanding--- the possibility of change--- depends on that kind of effort, and the inevitable clash of ideas that follows should be celebrated and nourished rather than crushed. Teachers have a heavy responsibility, a moral obligation, to organize classrooms as sites of open discussion, free of coercion or intimidation.

By all accounts Professor Ayers meets this standard. His classes are fully enrolled, and students welcome the exchange of views that he encourages.

The current characterizations of Professor Ayers---“unrepentant terrorist,” “lunatic leftist”---are unrecognizable to those who know or work with him. It’s true that Professor Ayers participated passionately in the civil rights and antiwar movements of the 1960s, as did hundreds of thousands of Americans.

His participation in political activity 40 years ago is history; what is most relevant now is his continued engagement in progressive causes, and his exemplary contribution---including publishing 16 books--- to the field of education.

The current attacks appear as part of a pattern of “exposés” and assaults designed to intimidate free thinking and stifle critical dialogue.

Like crusades against high school and elementary teachers, and faculty at UCLA, Columbia, DePaul, and the University of Colorado, the attacks on and the character assassination of Ayers threaten the university as a space of open inquiry and debate, and threaten schools as places of compassion, imagination, curiosity, and free thought.

They serve as warnings that anyone who voices perspectives and advances questions that challenge orthodoxy and political power may become a target, and this, then, casts a chill over free speech and inquiry and the spirit of democracy.

We, the undersigned, stand on the side of education as an enterprise devoted to human inquiry, enlightenment, and liberation. We oppose the demonization of Professor William Ayers. 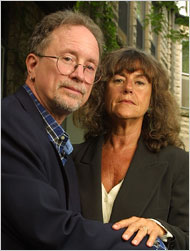 working people are getting laid off

but these parasites have

2 posted on 10/22/2008 8:34:37 PM PDT by ken21 (people die and you never hear from them again.)
[ Post Reply | Private Reply | To 1 | View Replies]
To: STARWISE
"...the attacks on and the character assassination of Ayers threaten the university as a space of open inquiry and debate, and threaten schools as places of compassion, imagination, curiosity, and free thought."

“who is currently under determined and sustained political attack. “

? Is telling the truth about him being an unapologetic terrorist political?

Gee, what a surprise.

Free as a bird,Guilty as hell,Poor as a bum-sorry no money to give to terrorists

“His participation in political activity 40 years ago is history”

He gave a speech toasting Huge Chavez *last year*.
He has politicized the field of education with his work.

A fine set of rationalizations from ‘fellow traveller’ professors.

Oh they “review” all sign ups so be original.

9 posted on 10/22/2008 8:41:58 PM PDT by Drango (A liberal's compassion is limited only by the size of someone else's wallet.)
[ Post Reply | Private Reply | To 6 | View Replies]
To: Drango
another thing you can do is go to the website,endorse statement and then when it asks for your name fill in appropiate info such as terrorist,commie and F'er.

it's OK,be as vile as you want!

I signed it as:

“
It seems that the character assassination and slander of Bill Ayers and
other people who have known Obama is not about to let up.
“

Well, the spirit of Harry Truman is alive.
Even though it has fled to the Republicans/conservative after experience
a “hostile work environment” in Mendacity Cental (aka, The Democratic Party).

We just tell the truth about Obama, Ayers, and all their fellow-travelers...
and they think it’s “hell”.

Some of those on the list are actually fake people or real names added by pranksters.

None of the ones I added made it through apparently:

After that attempt I unsuccessfully added these:

Great radio comedy! Is he any good after his un-retirement?